December 1, 2019 / cristolaverdad / Comments Off on Mysticism- Ignatius of Loyola, Pt.2
This entry is part 4 of 8 in the series Mysticism
Mysticism

Loyola’s secretary Alfonso de Polanco, was also a converso.  Relative Antonio de Lara, whom Ignacio served as soldier also had converso ties. <-This link is a book by R. Aleksander Maryks associate director of the Institute for Advanced Jesuit Studies at the Jesuit Boston College.

Maryks aslo wrote ‘The Jesuit Order as a Synagogue of Jews‘ which provides categorical evidence that at least 5 of the first Jesuits founders were of Jewish religious ancestry (not necessarily of Jewish blood)— Salmeron, Laínez, Bobadilla, Rodrigues, & Loyola himself.

There is much more evidence that Loyola was a crypto-Jew, but even if anyone for some reason doesn’t want to believe that, & it’s understandable (Initially I had doubts myself), still there is no doubt that his & his followers practices were occultic.

People saw many times Ignatius Loyola levitating (please see image) as well as other Jesuits (Francis Xavier, etc). It is known that many Catholic mystics levitated, e.g Francis of Assis, Teresa of Avila, St. Thomas Aquinas, St. Joseph of the Cross,  etc. Vatican have more that 200 accounts of saints and lay Catholics levitating. 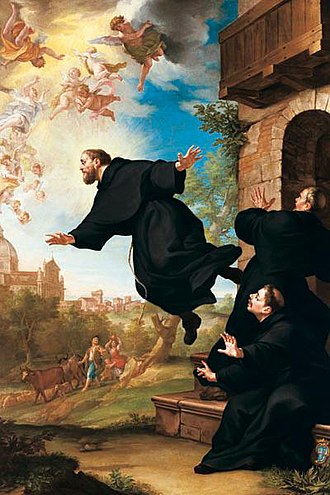 But Hindu yogis, Buddhists, which doctors, spiritis (e.g Douglas Home), etc. are also among the people who levitates. And all of them will say they can do that because of many hours/days of continuous meditation. They are not talking about simply meditation (thinking or pondering about a subject), but of a specific technique were they usually empty their minds & recite words, which happens to be a doorway to occultism.

Even occultists knew about the Jesuits involvement in magic:

It is curious to observe, how persistently the Order has assailed everything like Occultism from the earliest times, and Theosophy since the foundation of its last Society, which is ours. The Moors and the Jews of Spain felt the weight of the oppressive hand of Obscurantism no less than did the Kabalists and Alchemists of the Middle Ages. One would think Esoteric philosophy and especially the Occult Arts, or Magic, were an abomination to these good holy fathers? And so indeed they would have the world believe. But when one studies history and the works of their own authors published with the imprimatur of the Order, what does one find? That the Jesuits have practised not only Occultism, but BLACK MAGIC in its worst form, more than any other body of men; and that to it they owe in large measure their power and influence! -Occultist Helena Blavastky, ‘Theosophy or Jesuitism’.

If we do some research on some works of the Jesuits we find this to be the case. Anthony Escobar, Jesuit moral theologian, his first literary efforts were Latin verses in praise of Ignatius Loyola (1613) and Virgin Mary (1618), but his principal works focus on exegesis and moral theology. He wrote ‘Theologiae Moralis’ 1663, & Volume 4 (IV), section 6 under the heading ‘Magic’, he recognized magic is of the devil but believed it was lawful to use it: 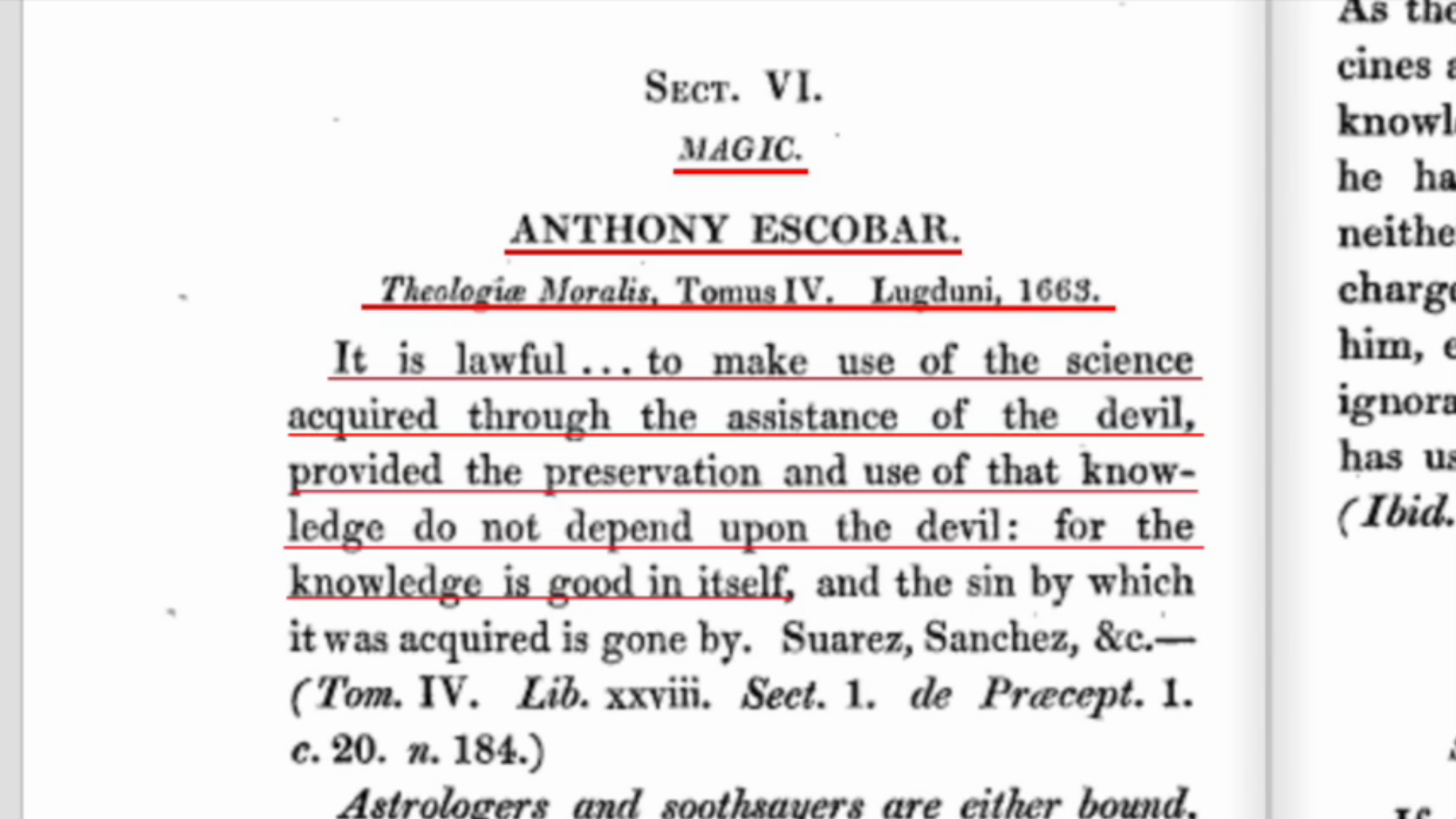 Kabbalah doctrine appeared first in Southern France in the 12th century and spreaded to the north regions of Spain (Catalonia, etc.). Many years before Loyola was born, a Catholic Franciscan mystic Ramon Llull  (1232-1315, from Majorca, Spain) who had a series of visions, wrote treatises on alchemy (occultism) & used kabbalah (Cabala in Latin) as a supposedly tool of conversion for Jews, and from there was born what some call ‘Christian kabbalah’ which reinterpreted Kabbalistic doctrine to a Christian perspective.

Among the first promoters of this kind of Cabala was Italian Giovanni Pico della Mirandola (1463-1494) a Catholic mystic nobleman and philosopher (also a converso), who is considered the founder of ‘Christian Kabbalah’.  He was a Gnostic that believed we are gods in the making.

“Although condemned by a tribunal, Pico [della Mirandola]’s synthesis [of Hermetism and ‘Christian Cabala’] was rehabilitated in 1493 by (pope) Alexander VI (Rodrigo Borgia), whose recognition of the Cabalist as a loyal son of the Church seemed to give some authority to Pico’s position.” – Watchpairsite.com

Athanasius Kircher, was a Jesuit who taught & promoted Kabbalah, his work Oedipus Aegyptiacus is full of witchcraft, alchemy, astrology & kabbalah.

Kabbalah is not compatible with the Bible or Christianity, it contradicts both Old and New Testament teachings. They believe Lucifer is the true god. It is an esoteric, twisted Jewish doctrine, an occultic system used not only in contemporary Judaism, but also by Masons, Theosophists, Luciferians and other occultic groups.

Kabbalah denies creation as a direct act of God and teaches God and His creation to be one, this is a pantheistic idea. But the Word of God says God created all from nothing (Gen.1:1) and God is separate from His creation (Isaiah 55:8-9) & He made Himself accessible to the world through Jesus Christ (John 3:16, etc).

Kabbalah denies the Deity of Jesus Christ and the necessity of faith in Him as the only way of salvation. It teaches reincarnation, astral projection, necromancy, astrology, numerology, cooperation with demons, etc. & no need for a Redeemer, it teaches that the blood atonement of a Messiah is unnecessary for salvation. Kabbalah is contrary to the teachings of the biblical patriarchs Abraham, Issac & Jacob or the Hebrew Torah/Tanach.

Some of the order’s tactics & methods were revealed in a book called the “The Secret Instructions of the Jesuits”. The book was released by a former Jesuit in 1717- (video).  Other books ‘The Enemy Unmasked‘ – Bill Hughes, ‘The Black Pope‘ – M.F. Cusack, ‘Fifty Years in the Church of Rome‘ – Charles Chiniquy, (Lincoln was Charles Chiniquy’s lawyer when the Jesuits were trying to put him in prison on false charges, Lincoln won the case). A short video of ex-Jesuit Alberto Rivera. More information here,.

“Between 1555 and 1931 the Society of Jesus [i.e., the Jesuit Order] was expelled from at least 83 countries, city states and cities, for engaging in political intrigue and subversion plots against the welfare of the State, according to the records of a Jesuit priest of repute [i.e., Thomas J. Campbell]. Practically every instance of expulsion was for political intrigue, political infiltration, political subversion, and inciting to political insurrection.” (1987) The Babington, p.12, by J.E.C. Shepherd (Canadian historian)

Pope Clement XIV under political pressure abolished “forever” the Jesuit Order in 1773. He said & some others rumored as well that he was poisoned by the Jesuits: “Alas, I knew they [i.e., the Jesuits] would poison me; but I did not expect to die in so slow and cruel a manner.” (1774)–Pope Clement XIV   (This way of poisoning is known as the Borgia cup)

After their restoration made by Pope Pius VII in 1814, the Jesuits started to return to most of the places from which they had been expelled. Over the last 450 years the Jesuits have established the largest network of schools and universities around the world.

“Since 1814 the Jesuit Order has been in complete control of the Vatican institution (Catholic clergy and its hierarchy) and also currently controls other organizations, like the Military Order of Malta, United Nations, Nato, European Commission, Council on Foreign Relations, Several central banks, numerous societies and cults such as Freemasonry and Opus Dei. ” Smoke Screens Chap.10, by J. Chick

Jesuits devotion is towards the Virgin Mary. The ‘Madonna Della Strada‘ (the Italian for Our Lady of the Wayside, or Our Lady of the Good Road ) is the patroness of the Society of Jesus, not Jesus. Loyola, was said to have been protected by the Virgin Mary during battle in his service as a soldier. You can read more about the History of the Jesuits here and here (by Principal Austin, A.M., B.D., 1889). Their current Superior General is Venezuelan communist Arturo Sosa.

The Jesuits are the masterminds behind the New World Religion (video -Ananda Temple of Light) & the New World Order. Please check pictures of all religions as one:

The future temple, with all religions of the World. Exhibited at the Jesuit Church of St. Ignatius of Loyola, in Rome, where he was buried. See video & pictures.

Scale model of a temple for a New World Religion. Notice countries names, the statues of saints on building, etc. 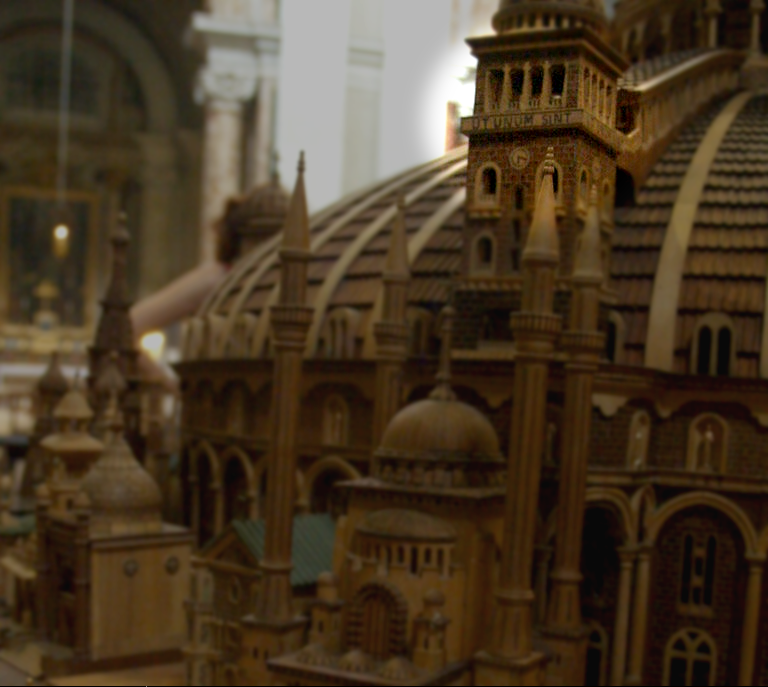 We can read a phrase in each tower of every (4) main entrance “Ut unum Sint” in Latin, which means “That they may be One“. 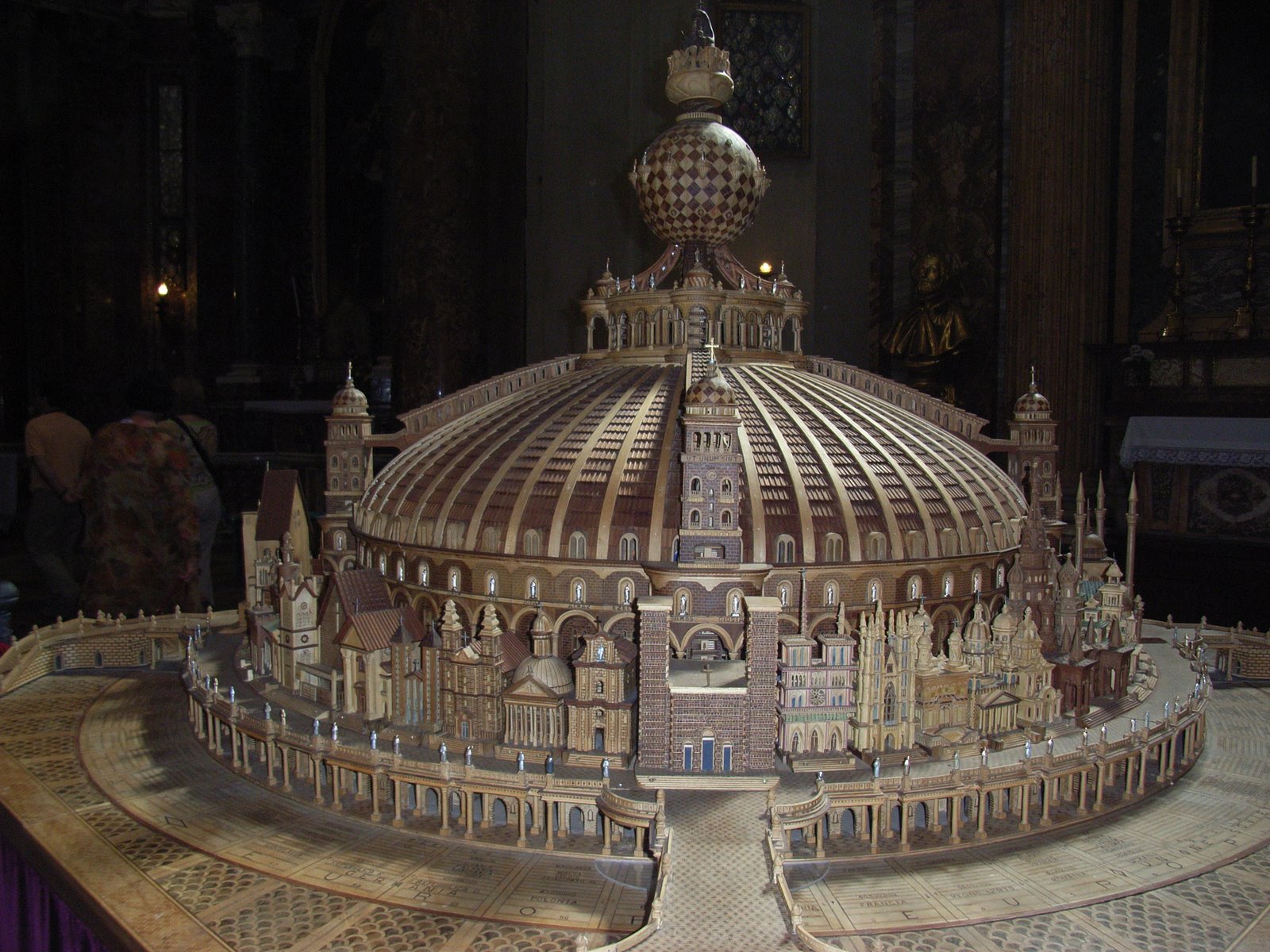 Wooden model of future world religions temple. The plaque reads “Wooden model of the temple of Christ the King” but we know this is the false christ & not our Lord Jesus.

You can look online for document ‘MINIATURA IN LEGNO DEL TEMPIO DEL CRISTO RE’ and translate document from Italian: “Ut unum sint” is this the dominant and inspirational thought on which the design and construction of the “Temple of Christ the King” by the Neapolitan artist Vincenzo Pandolfi was based. The work, a miniature in precious wood, was donated to the Holy Father (Pope John Paul II) on the occasion of his pastoral visit to the Diocese of Nola (Campania), in 1992. The idea of the artist is to bring together in one large large church all world religions, assuming the abolition of all wars in order to achieve universal peace. The work rests on a wooden base with a quadrellissoide surface of diam. m.2.80 with scale 1 to 200. In the peripheral area on the four sides of the temple, the artist has placed 16 buildings and four ramps through which you reach the upper floor. Each ramp is surmounted by a pedestal for the statue of the patron saint of each of the continents represented. At the center of the temple there is a three-storey altar; on the first floor there are four organs, on the second the plan for the Eucharistic celebrations and on the third the exposition of the Blessed Sacrament. . .”

Healing in the Atonement?