The John 17 Movement is one of many ecumenical groups that works to bring ‘unity’ between Evangelicals & Catholicism. It was founded in May 2015 by pastor Joe Tosini in Phoenix, AZ.

The slogan of the movement sounds good, & is:

‘‘Father, may we be one so that the world may believe you sent me.”

They say inspired in a prayer of Jesus found in John 17:21,22. But we’ll see exactly what Jesus said & prayed for, and how His words had been twisted. Please read the entire John chapter 17 so you can can read in context. And let us highlight some important words:

20 “I do not pray for these alone, but also for those who will believe in Me through their word; 21 that they all may be one, as You, Father, are in Me, and I in You; that they also may be one in Us, that the world may believe that You sent Me. 22 And the glory which You gave Me I have given them, that they may be one just as We are one: 23 I in them, and You in Me; that they may be made perfect in one, and that the world may know that You have sent Me, and have loved them as You have loved Me”. John 17

– It is clear that the unity that Jesus was talking about is not a unity with the world (which is the goal of this group) & that it should be centered in Jesus Christ & His Word, not our own ideas. The people that believe & keep His Word are the only ones that become ONE in Him! The Unity is of the Spirit of God! (Ephe.4:3) It’s already there, we are instructed to KEEP it. Without the Holy Spirit there is no true unity. “For all who are led by the Spirit of God are sons of God. Rom.8:14.

We can’t have unity at expenses of truth, we should have respect for all humans, yes, but not have ‘spiritual unity’ or be One with them, it would be a fake unity anyway. This interfaith unity will take the world under the authority of one religious leader (the false prophet of Rev.13 & 16) who is against God & will be the Antichrist right hand . These ecumenical/interfaith groups are deceiving the world with false promises of peace. 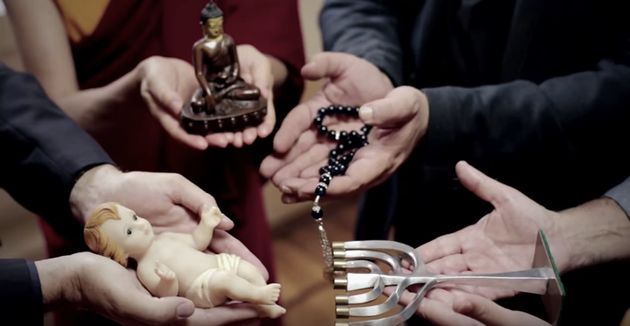 Pope Francis made a video not long ago to call for interfaith unity & said we ALL are God’s children.

We are all God’s creation, but the Bible says that only those who receive Him (His words included) & believe in Him are the children of God:

I don’t think their slogan was a coincidence since is also the title for an encyclical issued by Pope John Paul II on 25 May 1995, calling for ecumenical commitment.

We agree that prayer meetings & unity among Christians that worship & follow the same God & His Word is good. But not “unity” with the world or with those who contradict/reject God’s Word (Please see here & here), that for many years in the past killed thousands of Christians because didn’t agree with their teachings, & who’s maximum leader says having a direct, personal relationship with Jesus is dangerous & harmful! video.

The Word of God teach us that we are to hold to the doctrine of Christ. The word doctrine means teachings, instructions. For this reason ‘true’ Christians follow the teachings & instructions of Jesus Christ, found in the New Testament.

” Whosoever transgresseth (G3845 = depart, leave), and abideth (G3306 = remain, stay, continue) not in the doctrine of Christ, hath not God. He that abideth (G3306 = remain, stay, continue) in the doctrine of Christ, he hath both the Father and the Son. If there come any unto you, and bring not this doctrine, receive him not into your house, neither bid him God speed: For he that biddeth him God speed is partaker of his evil deeds.”  2 John 1:9-11 .

Jesus said: 15  If ye love me, keep my commandments (G1785=precepts).  -21  He that hath my commandments, and keepeth them, he it is that loveth me: and he that loveth me shall be loved of my Father, and I will love him, and will manifest myself to him. 22 Judas saith unto him, not Iscariot, Lord, how is it that thou wilt manifest thyself unto us, and not unto the world?  23  Jesus answered and said unto him, If a man love me, he will keep my words: and my Father will love him, and we will come unto him, and make our abode with him. John 14: 15,21-23

“Now I beseech you, brethren, mark (#G4648 consider) them which cause divisions and offenses (#G4625 stumbling block) contrary to the doctrine which ye have learned; and avoid them. For they that are such serve not our Lord Jesus Christ, but their own belly; and by good words and fair speeches deceive the hearts of the simple.” Rom. 16:17-18 , (see also Titus 3:10).

“14 Do not be unequally yoked together with unbelievers. For what fellowship has righteousness with unrighteousness? What communion has light with darkness? 15 What agreement has Christ with Belial? Or what part has he who believes with an unbeliever? 16 What agreement has the temple of God with idols? For you are the temple of the living God. As God has said: “I will live in them and walk in them. I will be their God, and they shall be My people.”  17 Therefore, “Come out from among them and be separate, says the Lord. Do not touch what is unclean, and I will receive you.”  18 “I will be a Father to you, and you shall be My sons and daughters, says the Lord Almighty.” 2 Cor.6:14-18

The word of God says about idols:

“You shall not make for yourself a carved image—any likeness of anything. . . you shall not bow down to them nor serve them” Exodus 20:4

“Take careful heed to yourselves, for you saw no form when the Lord spoke to you at Horeb out of the midst of the fire, 16 lest you act corruptly and make for yourselves a carved image in the form of any figure: the likeness of male or female” Deut. 4:15-16.

Of course the Catholic Church says they don’t worship Mary or saints they just venerate them. But even when I was a Catholic, we never knew the difference between veneration & worship, besides, we can notice the devotion to the Virgin Mary has always been stronger than any devotion to Jesus or to God. But the most important thing is, that the Word of God never teach us to adore (or venerate) or to PRAY to anybody except God alone! 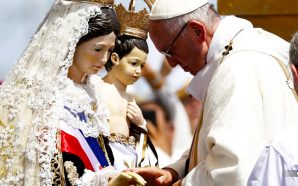 Pope Francis tells 600,00 Catholics gathered in Panama City Jan. 2019 to follow the footsteps of the Virgin Mary, calling her the biggest “influencer” of all times 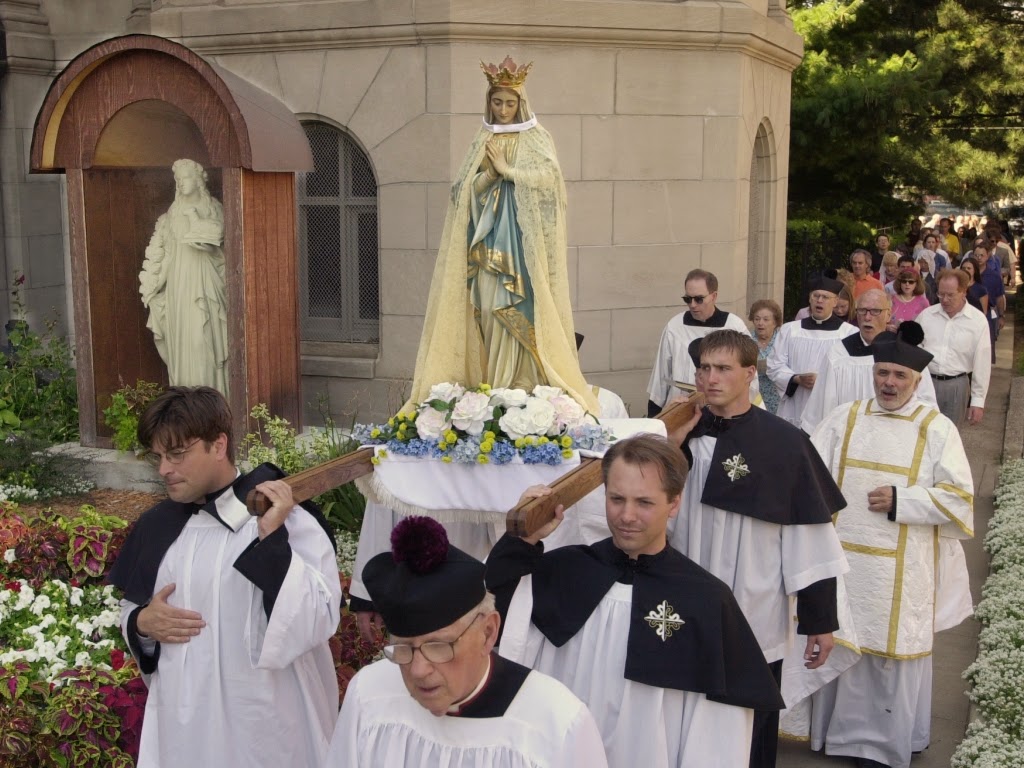 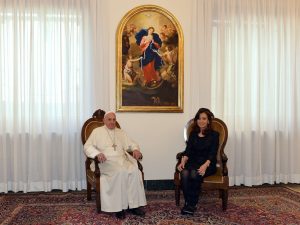 On Sept. 2014 Argentinian President Mrs. Kirchner presented a gift to Pope Francis of an image of ‘Our Lady, Untier of Knots‘, virgin that Pope Francis has promoted veneration throughout Latin America. See more about symbolism of knots.

Catholicism teaches Mary is the co-redeemer, co-mediator (mediatrix) along with Jesus, but the Bible says this about our only mediator:

“be it known to you all, and to all the people of Israel, that by the name of Jesus Christ of Nazareth, whom you crucified, whom God raised from the dead. . .Nor is there salvation in any other, for there is no other name under heaven given among men by which we must be saved.” Acts 4:12

“For there is one God and one Mediator between God and men, the Man Christ Jesus” (1 Timothy 2:5).

Why do they have so many contradictions if they also have the bible? Because their authority is not the Word of God alone but also their traditions (extra biblical teachings), e.g. In 1848 Pope Pius IX declared the dogma of Virgin Mary being born free from original sin or ‘immaculate conception’ (entirely holy and free from all stain of sin) & later on 1 November 1950 Pius XII declared dogma Mary’s bodily assumption, teachings that you wont find in the bible.

“ As a result the Church, . .”does not derive her certainty about all revealed truths from the holy Scriptures alone. Both Scripture and Tradition must be accepted and honored with equal sentiments of devotion and reverence.” Catechism of the Catholic Church #82

“Thus it comes about that the [Catholic] Church does not draw her certainty about all revealed truths from the Holy Scriptures alone. Hence, both Scripture and Tradition must be accepted and honored with equal feelings of devotion and reverence...”
-Austin Flannery, Vatican Council II: The Conciliar and Post Conciliar Documents, 1988, p. 755, ISBN: 9780918344151;

Catholicism does not keep the Word of God, nor does base their practices on it. On the contrary they are constantly contradicting the Word of God. Please beloved, read & study your Bibles, it is the only way to stand firm in the faith. Sadly the ones that are not well grounded in God’s Word, have been falling for the ‘Social Justice’ Gospel & are getting seduced by the deception of the enemy.

The Jesuits (pope Francis is a Jesuit) & many false Evangelical teachers are also using this twisted verse of John 17 to teach Union Mystica (mysticism) to the naive Christians.

Please beloved pray for all the Christians that are being deceived & for the good people following Catholicism, pray that the Lord Jesus will touch their hearts & open their eyes to see His TRUTH.

The Unity of the Spirit

Living in Times of Apostasy

My Journey Out of Catholicism