November 20, 2017 / cristolaverdad / Comments Off on Is the ESV (English Standard Version) a Good Bible Translation? Pt.3
This entry is part 3 of 4 in the series Bible Versions
Bible Versions

The ESV changes more than 2,800 words to make it a gender-neutral bible (Gnostics believe in a both gender or androgynous god).

But there are many more changes, you can see some tables of comparison, ( remember ERV is the basis for ESV,  with only 5%-10% of changes from original ERV): differences. Altered Verses,  Another Bible – Another Gospel,   Bible Version Comparison.

A quick test that we can do to find out is: Any version of the Bible which omits Acts 8:37, “Philip said, “If you believewith all your heart, you may.” (be baptize) He answered, “I believe that Jesus Christ is the Son of God.”  and that also omits the words “through his blood” in Col. 1:14  “In whom we have redemption through his blood, even the forgiveness of sins:”  then evidently has for its foundation a corrupted manuscript. 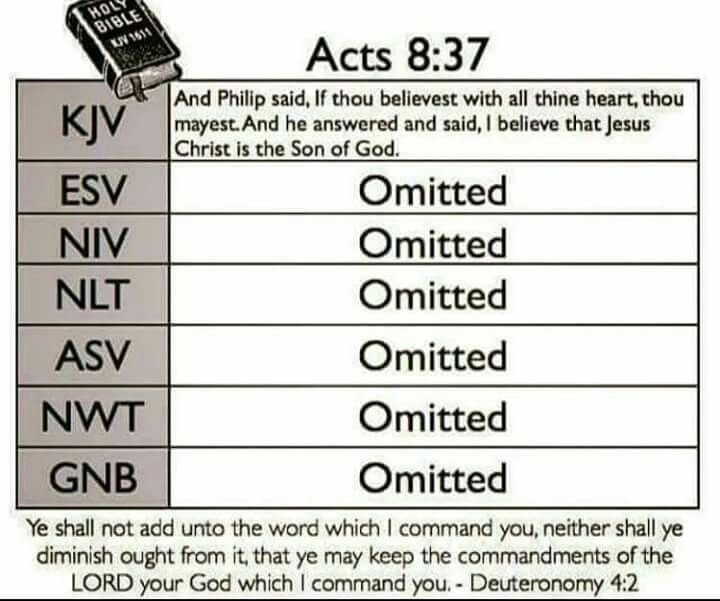 We will talk more about the Textus Receptus (or Majority Text) in future posts. But for now it is very important to understand that there are many antique bibles found, many are older than the Greek Alexandria texts (Sinaiticus & Vaticanus dated 4th century AD) and that follow closer the Textus Receptus, but are not been considered by modern translations, only because they are in a different language than Greek. Examples:

Syrian bibles, with some major versions: The Peshitta, with more than 350 manuscript some as early (A.D. 145) but some others as old as 5th century (the Peshitta is considered the third & last stream of family manuscripts, an Aramaic translation that even it is close to Textus Receptus it has significant variations ).  The Diattessaron, Syriac Bible (A.D. 165-175), the Old Syriac (A.D. 400), the Palestinian Syriac (A.D. 450), and the Philoxenian (A.D. 508) This last one was revised by Thomas of Harkel, in A.D. 616, and because of that it’s also known as the Harclean Syriac.

The Old Latin Vulgate or Italia 157 A.D. (this is not Jerome’s Latin Vulgate of 382 A.D. but this translation was made for the young churches established in the northern Italian Alps & was one of the manuscripts used by Erasmus), notice it was made two hundred years before the Sinaiticus and Vaticanus were produced, & a full century before the theorized “Lucian Recension”),.

The Waldensian (A.D. 120 & onwards), The Gallic Bible A.D. 177 (Southern France), The Gothic Bible (A.D. 330-350), The Armenian Bible (A.D. 400) There are around 1,244 copies of this bible version still in existence today! But if all these wasn’t enough the New Testament quotations of the writings of the early church, Chrysostom, the early Fathers of Antioch in Asia Minor, etc.  (more than 86,000 citations from Scriptures) agree with the Textus Receptus manuscripts .

Does it Really Matter?

Is the ESV a Trustworthy Translation?

What About the NASB, NIV & Other Translations?

The History of English Bible Revision