The English Standard Version or ESV has become a very popular bible. It’s being heavily promoted by pastors, organizations, some scholars and bible teachers from different denominations including Catholics around the world, and Calvinist, but it’s gaining acceptance in other denominations as well. According to Calvinist teacher John MacArthur the ESV is the best translation which he compares with the Authorized King James, he now sells ESV study bibles with his signatures & notes. But is the ESV a good bible translation? Aren’t all bibles the same? Where does it comes from?

“The version [ESV] had its roots in discussions that took place before the May 1997 meeting called by James Dobson at Focus on the Family headquarters to resolve the inclusive NIV issue. . . The group discussed the merits of the Revised Standard Version, first published in 1952 by the National Council of Churches and recently replaced by the New Revised Standard Version, a regendered update. Some months later, Trinity Evangelical Divinity School professor Wayne Grudem and Crossway President Lane Dennis entered into negotiations with the National Council of Churches to use the 1971 revision of the Revised Standard Version as the basis for a new translation.”   (David Bayly, “Decline of the NIV?”, World Magazine, 5 June 1999)

In 2007 Murdoch bought Beliefnet one of the largest (inter) faith networks. He also owns 20th Century Fox, Fox News, pornographic Sky Network (Sky now owns and operates its own pornographic channels), his News Corp. company is a major owner of DirecTV. He is a prominent shareholder in BskyB Which platforms pornography channels such as Playboy, Telx, red hot tv. etc. Murdoch’s media ownership extends to Asia, western Europe, Africa, the Middle East, and Latin America. Because of his faithfulness to the Roman Catholic Church (even he is the biggest producer of worldwide pornography) Murdoch was given papal knighthood of the Pontifical Order of St Gregory the Great (Order of Malta) in January 1998, which makes him a commander in the order. 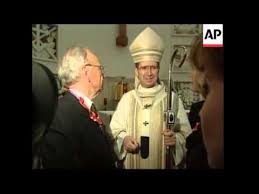 Rupert Murdoch the day of his papal knighthood

The Catholic Church before the Reformation claimed to have exclusive right over the exegesis of the Holy Scriptures no body else could posses, translate or publish the bible. The Vatican on 16th century had an official bible on one language, the Latin Vulgate canonical version by Jerome (many confuse this with the Old Latin Vulgate, but these are not the same). To keep control they discouraged people from reading the Scriptures on their own. This control intensified trough the middle ages, the possession of bibles and the translations into any other languages was hindered by confiscating and burning bibles, but on top of that people were, imprisoned, persecuted & burned at the stake on the basis of heresy.  Like the Catholic Latin Vulgate, the ESV & the modern bible versions have the same Alexandrian manuscripts, and the right to copy & publishing bibles is getting in the hands of a powerful & devout Catholic . . . is history about to be repeated again?

The RSV, NRSV and now the ESV claim to be in the “Tyndale-King James legacy” but this is only a trick to sell. To clarify, we are not part of the ‘King James only’ movement, but we believe the King James Bible is one of the best translations of the bible in the ‘English’ language, as well as other Bibles translated from the Textus Receptus or Received Text (also known as Majority Text). We have been, and always will be “Textus Receptus Only”. The arguments should not be about whether the King James is the best bible, but about which text of manuscripts is more reliable. There are only few bibles left today in every language that still uses the Textus Receptus, examples in English language: Authorized King James; ‘The Interlinear Bible’ by Jay P. Green Sr.; George Ricker Berry, Interlinear Greek-English New Testament, World Publishing, 1997, 1999; New King James (which unfortunately had some changes and words removed & also had a triquetra occult symbol on cover, which after many complaints was removed from later editions) & the Modern English Version, MEV.

Sound doctrine is important because what we believe has an impact on what we do. There is a direct correlation between belief and behavior. Sound doctrine leads to life. Jesus warned us to be wise & build our lives on the solid rock of His words/teachings (doctrine), not doing so will be a foolish thing that will cause us a great fall or ruin (Matthew 7:24-27). Unsound doctrine leads to apostasy, to spiritual ruin.

Because we consider sound doctrine important we prefer a bible version translated from the Received Text (Textus Receptus or Majority Text) that doesn’t remove or add important words.

“For I know this, that after my departing shall grievous wolves enter in among you, not sparing the flock. Also of your own selves shall men arise, speaking perverse (G1294= distort, corrupt ) things, to draw away disciples after them. Therefore watch, and remember, that by the space of three years I ceased not to warn every one night and day with tears”.  Acts 20: 29-31

-For the time will come when they will not endure sound doctrine; but after their own lusts shall they heap to themselves teachers, having itching ears; and they shall turn away their ears from the truth, and shall be turned unto fables. ( 2 Timothy 4:3-4  )

“Take heed unto thyself, and unto the doctrine; continue in them: for in doing this thou shalt both save thyself, and them that hear thee.” (1 Timothy 4:16).

Most modern translations like New International Version NIV, The Living Bible, New Revised Standard NRS, ESV, etc. weaken core doctrine. I remember having trouble to prove the divinity of Jesus Christ or His death on the cross (not a stake) to a Jehovah’s Witness who knocked on my door, when I used an NIV. One word from God omitted or changed can produce doubt & doubt is contrary to faith (and without faith it is impossible to please God, Heb.11:6). That has been the enemy’s strategy from the very beginning : “And the Lord God commanded the man, saying, “Of every tree of the garden you may freely eat, but of the tree of the knowledge of good and evil you shall not eat,...” Gen.2:16-17, & we see in Gen.3:1 how the enemy changed God’s words: “Now the serpent was more subtle than any beast of the field which the Lord God had made. And he said to the woman, “Has God said, ‘You shall not eat of any tree of the garden’?” After Adan & Eve doubted God, then the enemy was ready to saw his seed of deception.