I believe that the Antichrist is coming out from the gentile world but is of Jewish descent not only because that’s the only way it will be accepted by the Jews as their Messiah, but also because the Bible mentions few things that point to that direction:

“And the king shall do according to his will; and he shall exalt himself, and magnify himself above every god, and shall speak marvellous (H6381=wonders, hard, difficult) things against the God of gods, and shall prosper till the indignation be accomplished: for that that is determined shall be done. 37 Neither shall he regard the God of his fathers, nor the desire of women, nor regard any god: for he shall magnify himself above all. 38 But in his estate shall he honour the God of forces: and a god whom his fathers knew not shall he honour with gold, and silver, and with precious stones, and pleasant things. Dan.11 :36-38  (AKJV)

This man prophesied in Daniel is also found in the New Testament were he is called the Antichrist, the man of sin & son of perdition:

“Let no man deceive you by any means: for that day shall not come, except there come a falling away first, and that man of sin be revealed, the son of perdition; 4 who opposeth and exalteth himself above all that is called God, or that is worshipped; so that he as God sitteth in the temple of God, shewing himself that he is God..” 2 Thes. 2: 3-4. (AKJV)

The God of his ‘fathers‘ refers to the God of Abraham, Issac & Jacob, the patriarchs that founded Judaism. Which means that even he (Antichrist) is of Jewish descent, he doesn’t practice real Judaism of Biblical times (today’s Judaism is passed trough the mother in accordance with the Oral Law), nor worships almighty God but exalts himself as god & honors ‘the god of forces‘ (Dan. 11:38). Kabbalah (Jewish mysticism) honors an androgynous god of forces ‘Ein Sof’ the emanator of the ten constellation of forces or ten sefirot (Tree of Life), for this reason I believe the Antichrist is a Kabbalist (Hasidic) Jew.

“In later Jewish literature, the ten sefirot refer either to the ten manifestations of God; the ten powers or faculties of the soul; or the ten structural forces of nature.

In Cordoveran Kabbalah, the forces of creation are considered as autonomous forces that evolve linearly from one another. By contrast, in Lurean or Lurianic Kabbalah (the Kabbalah of Isaac Luria), the sefirot are perceived as a constellation of forces in active dialogue with one another at every stage of that evolution.          . . .

Kabbalah sees the Hebrew letters as channels of spiritual life force. This derives from the account in Genesis of the Creation of the World, where Creation takes place through 10 Hebrew “Sayings” of God (“Let there be..”). In Kabbalistic theology, these letters remain the immanent spiritual forces that constantly recreate all existence”. –Wikipedia

-“The Jewish mystical doctrine known as “Kabbalah” (=”Tradition”) is distinguished by its theory of ten creative forces that intervene between the infinite, unknowable God (“Ein Sof“) and our created world.

Through these powers God created and rules the universe, and it is by influencing them that humans cause God to send to Earth forces of compassion or severe judgment. –Jewish Virtual Library

-“A kabbalist is a person who studies nature and discovers its common force. This force produces the energy that build the entire universe. We call this force the Creator and study it” –Kabbalah teacher Dr. Laitman

The Antichrist will come to the Jews in his own name (John 5:43) & will appear as a smart man, full of good ideas in the political and economic arena, (Daniel 11: 21-24, 28). Helping with the peace process in the Middle East, he is like a political savior, giving direction and advice to a world in chaos and his motto will be world ‘peace’. But his helper or right hand will be a universal religious leader, the ‘False Prophet‘, the Pope.

If this is true, them we should see more & more in these last days in the general media and all the religions of the world, but mainly in Christianity a pressing for mysticism, Hebrew roots & Kabbalah indoctrination. As an example in the media, we have the books of Harry Potter, tv series, movies, e.g ‘Star Wars’ by George Lucas is Kabbalah indoctrination. I wont go into detail here but you will get the idea with next quotes from Star Wars: ‘May the Force be with you‘, ‘When you learn to calm your mind, you will access the Force‘, ‘Trust your feelings and you can access the Force‘.  George Lucas has stated on several occasions that he was heavily influenced by Kabbalah, Theosophy, etc.

Sadly undiscerning Evangelical are uniting with the Pope & Catholic leaders which besides siding with the antichrist, are also planning a ‘Global Revival’ to deceive many. Next are just a few of the many connections that we can find between the Vatican & Kabbalah:

1/ The Pope is the only person who can celebrate mass at the Papal Altar. Above the Papal altar that is in the center of the St. Peter’s Basilica in Rome there is a hieratic canopy or baldachin, made & designed by Gian Lorenzo Bernini, commissioned by pope Urban VIII (Who was educated by Jesuits & issued the canonization of Jesuit founders Ignatius of Loyola & Francis Xavier). It is said Bernini’s columns got inspired from the smaller marble helical columns once thought to have been brought to Rome by the Emperor Constantine from Solomon’s Temple in Jerusalem.

In the 4th century, Constantine the Great brought a set of columns to Rome and gave them to the original St. Peter’s Basilica for reuse in the high altar and presbytery; The Donation of Constantine, a painting from Raphael’s workshop, shows these columns in their original location. According to tradition, these columns came from the “Temple of Solomon”, even though Solomon’s temple was the First Temple, built in the 10th century BCE and destroyed in 586 BCE, not the Second Temple, destroyed in 70 CE. These columns, now considered to have been made in the 2nd century CE,[2] became known as “Solomonic”. In actuality, the columns probably came from neither temple. Constantine is recorded as having brought them de Grecias i.e., from Greece, and they are archaeologically documented as having been cut from Greek marble.[2] Probably, the most ancient example of such a column is the Serpent Column, from Delphi, Greece, (478 BC), relocated to Constantinople by Constantine the Great in 324 . Wikipedia

Strangely enough you will find these Vatican columns also on the cover of the Kabbalistic book the Zohar (Splendor). 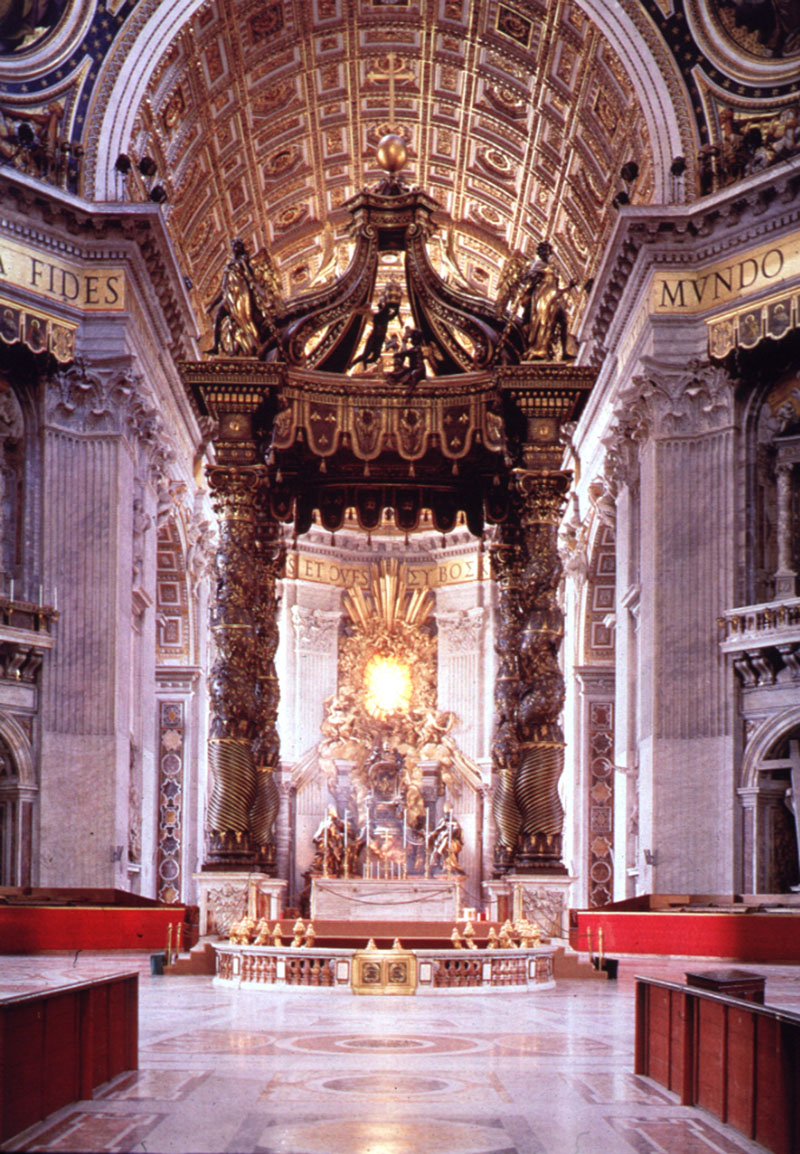 The columns of the Papal altar, work started on 1623 (inaugurated on June 29th, 1633) are almost identical to the ones in the Zohar cover. 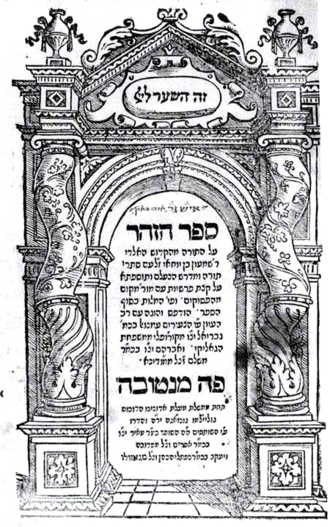 Cover page of the first printed edition of the Zohar in book form, published in Mantua, Italy in 1558. Pope Paul IV permitted the printing of the Zohar.

Detail of the Vatican’s columns, with laurel leaves, bees, cupids & lizards. This ‘Solominic’ columns signify ‘Supreme Wisdom” according to Masons. You will find same column inside temple of pedophile J. Epstein (Min.4:00)

The bronze used for the columns were taken from the lattice of the portico of the Pantheon, as we are told by the commemorative stone inserted there. The marble pedestal (2.68m) under the columns is said to have the coat of arms of the family of Pope Urban VIII, the Barberinis, they also have images of estrange woman faces & grotesque masks, please see http://stpetersbasilica.info/Altars/PapalAltar/COA-Pedestals.htm.

2/ The main Kabbalah book the Zohar right from the beginning speaks about ‘Rosa Mystica‘, which we also find in the Catholic tradition, the Virgin Rosa Mystica, which is related with the number 13th as well:

3/ Hebrew letters of Kabbalah tradition were found in Michelangelo frescoes in the Catholic Sistine Chapel – Please see here. The Vatican have now a tour for the visitors from a Jewish (Kabbalistic) Perspective “Let your private guide regale you with stories of Michelangelo’s immersion in the Talmud, Torah, and Kabbalah”. – (Emphasis in the original).

4/ Also Pope Francis made a decree on Dec. 2015 that Catholics should not try to convert Jews. 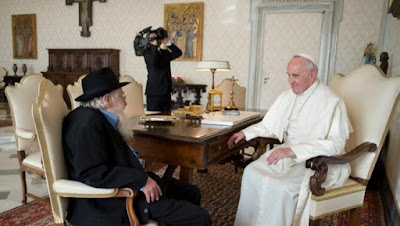 6/ ‘Christian’ Kabbalah (an oxymoron, because Kabbalah rejects Jesus Christ) started in the Catholic Church around the 15th century mainly by Giovanni Pico de la Mirandola (a converso or Crypt Jew). For more information please see here. Later kabbalah completely infiltrated the Catholic Church trough the Catholic mystics, Ignatius of Loyola & the Jesuit Order.  Most Catholics don’t know about this & many will even get offended or wont believe this is even possible, since they recognize that Kabbalah is evil.

7/ Many Evangelical Christians don’t really understand what it means to be a Jesuit & that Pope Francis is a follower of the Jesuit’s founder,  Mystic & Crypt Jew Ignatius of Loyola who practiced Kabbalah. Kabbalah is an occult practice & the foundational element in all modern witchcraft. Virtually all of  witches, sorcerers, occult sects, & secret societies of the past thousand years were & are Kabbalists.

8/ I just found this video after writing this post, which proves to me that many Christians have also noticed & are finding out about the connection between Catholicism & Kabbalah.

According to the writings of occult leaders, Kabbalah Initiation must occur worldwide before their “Moshiach”/messiah can appear. That is the “assignment” of all these false doctrines & false teachers: to initiate Christians into Kabbalah, so their messiah can be revealed.

Update: Article from a Catholic:  The Catholic Church . . . : Jorge Mario Bergoglio signed as a Freemason since 1977