Gospel according to John, Chapter 6:  Read &/or listen from the Bible. 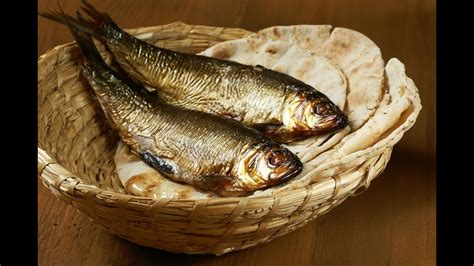 After these things Jesus went over the Sea of Galilee, which is the Sea of Tiberias. 2 Then a great multitude followed Him, because they saw His signs which He performed on those who were diseased. 3 And Jesus went up on the mountain, and there He sat with His disciples.

4 Now the Passover, a feast of the Jews, was near. 5 Then Jesus lifted up His eyes, and seeing a great multitude coming toward Him, He said to Philip, “Where shall we buy bread, that these may eat?” 6 But this He said to test him, for He Himself knew what He would do. 7 Philip answered Him, “Two hundred denarii worth of bread is not sufficient for them, that every one of them may have a little.”

8 One of His disciples, Andrew, Simon Peter’s brother, said to Him, 9 “There is a lad here who has five barley loaves and two small fish, but what are they among so many?”

10 Then Jesus said, “Make the people sit down.” Now there was much grass in the place. So the men sat down, in number about five thousand. 11 And Jesus took the loaves, and when He had given thanks He distributed them to the disciples, and the disciples to those sitting down; and likewise of the fish, as much as they wanted. 12 So when they were filled, He said to His disciples, “Gather up the fragments that remain, so that nothing is lost.” 13 Therefore they gathered them up, and filled twelve baskets with the fragments of the five barley loaves which were left over by those who had eaten. 14 Then those men, when they had seen the sign that Jesus did, said, “This is truly the Prophet who is to come into the world.”

15 Therefore when Jesus perceived that they were about to come and take Him by force to make Him king, He departed again to the mountain by Himself alone.

Aside from the resurrection, the feeding of the more than five thousand is the only miracle that is repeated in the four gospels: Matthew 14:13-21, Mark 6:30-44, & Luke 9:10-17. Also, no other miracle of the Lord Jesus Christ was performed in the presence of so many witnesses. The Greek word G435 used in Matthew 14:21 specifies the five thousand were men & emphasizes the point by adding, “Besides women and children.” Many Bible scholars believe the actual number fed could have been around 15,000—20,000 people. One denarius was the wage for one day’s labor, then two hundred denarii (pl.) was the equivalent of about 8 months of income.

This miracle of the multiplication of the loaves and fishes served to show the compassion (Mt.14:40 & Mr.6:34) but also the creative power of Jesus. He created something that did not exist before, as he had done before when he turned water into wine at the wedding in Cana.  The crowd was attracted by the miracles of Jesus, because of the curiosity that His miracles aroused. Still, the Lord did not stop doing them good. This passage highlights the love and grace of our Lord Jesus, His glory is revealed by His willingness to once again pour out His divine favor on an ungrateful crowd whom he knew  well (Jn 2: 24-25). But we know His grace is not activated by human merits, but precisely by the lack of them.

We also see here a contrast between the kind of Messiah that the people were waiting for, and what Jesus was like, the Messiah sent by God. As we see, after Jesus had multiplied the loaves and fishes, the crowd came to Him with the intention of making Him king (Jn 6: 14-15). They wanted  a Messiah or king who would solve their material problems, but the freedom He had come to bring was not political, but spiritual, freedom from their sins and their consequences. When they went to make Him king, Jesus withdrew from them and did not give in to their wishes. And in fact, when they came to look for Him the next day, Jesus exhorted them to work for “the food that endures to eternal life” and not for “the food that perishes” (Jn 6:27). Jesus’ teachings & His attitudes left no doubt that His interest was focused on spiritual and eternal realities,  & it was at that point that they lost their interest in Him (Jn 6:64-69).

Many people live with the idea that God has to constantly bless them with material things, and they are willing to put their faith in Him as long as He fulfill their wishes, but they will be disappointed, and even murmur or complaint, if He does not.  In these passages we will see that Jesus refused to feed them again and that He did not want to be their king under those conditions. All this help us to reflect on the type of Messiah in which we have believed.

16 Now when evening came, His disciples went down to the sea. 17 They got into a boat and went across the sea toward Capernaum. It was now dark, and Jesus had not come to them. 18 The sea was stirred up because a strong wind was blowing. 19 So when they had rowed about three or four miles, they saw Jesus walking on the sea and coming near the boat. And they were afraid. 20 But He said to them, “It is I. Do not be afraid.” 21 Then they gladly received Him into the boat, and immediately the boat was at the land to which they were going.

From the other evangelists we know that it was the Lord who made the disciples get into the boat and go to the other shore (Mt 14:22) (Mr 6:45).

The disciples struggled rowing the boat amid the waves and the strong wind. Then “they saw Jesus walking on the sea and approaching the boat.” Surely when the Lord commanded them to get into the boat and go ahead of him to the other side, they must have thought that their purpose was to join them by land, since there was no other boat there (Jn 6:22). But as we see, the Lord is not limited by the laws of nature and he can come to help us at any time He wants and in the way we least expect.

When the Lord came walking on the sea, the disciples “were afraid.” They evidently did not expect Him to do something like that, but Jesus reassured them by saying: “It is I. Do not be afraid.”
His purpose was to assist them and help them in their struggles and needs. But in order for Him to truly comfort them, they would first have to understand who He was. Of course, He did things that no human being can do, and by approaching them while walking on the sea, He demonstrated that He is above the forces of nature and the physical laws that govern us. And the very way he addressed them, he conveyed the security and authority of the Son of God himself. But there is still something else. The passage reminds us of (Psalm 77: 16-20), where the terror of some sailors surprised by a storm is described, until the Lord becomes present and guides His people in the same way as in the past He had done.