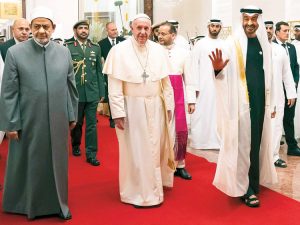 There was a WORLD peace plan document signed on Feb. 4th 2019 by Pope Francis in Abu Dhabi, UAE, called ‘Document on Human Fraternity for World Peace‘ : ‘The pope and the grand imam of al-Azhar have signed a historic declaration of fraternity, calling for peace between nations, religions and races, in front of a global audience of religious leaders from Christianity, Islam, Judaism and other faiths.” see more here.

Three days after Pope signed the ‘Human Fraternity for World Peace‘, document the UAE news announced the construction of a multi-faith “Abrahamic Family House” complex in Abu Dhabi. They unveiled more details of the plan on Sept. of same year.

In this document of Human Fraternity for World Peace, they agree to form an interfaith council called ‘The Higher Committee of Human Fraternity‘ (also responsible for supervising the Abrahamic Family House) & urged political leaders and influencers to “work strenuously to spread the culture of tolerance and of living together in peace.” This document of World Peace (signed by Pope & and the grand imam of al-Azhar) was the official beginning of the One World Religion, that now has as the back bone the 3 monotheistic religions.

In December 5, 2019 the elected ‘Higher Committee of Human Fraternity‘ (which was formed also with the help  of Sheikh Mohamed bin Zayed Al Nahyan, Crown Prince of Abu Dhabi), met in New York, with the United Nations Secretary-General, António Guterres. Commenting on the meeting, Guterres said:

“The Human Fraternity Document, signed by the Grand Imam and Pope Francis, represents the practical application of religious tolerance and respect, and a direct and intended message to all believers that diversity in religion is a divine wisdom, just like difference in color, gender and language.  . . . “The signing of this document by the world’s top religious figures reflects the universality of its message that involves necessity of respecting and protecting the principle of religious freedom. This couldn’t have been possible without the support and efforts of His Highness Sheikh Mohamed bin Zayed Al Nahyan, Crown Prince of Abu Dhabi and Deputy Supreme Commander of the UAE Armed Forces, in getting this document signed and implemented to promote global coexistence and understanding. . . “. See:  https://wam.ae/en/details/1395302808328

We cannot choose where are we born (nation & language), nor our gender or race, but we can choose our beliefs or religion. For this reason diversity in religions is not comparable with diversity of gender, race, etc. There are diversity of religions in the world, but it has to do with earthly wisdom, they are man-made, it is not divine wisdom, since all these religions contradict each other! Truth cannot contradict itself or then it’s not truth. We know there is only one true God, creator of all things, & Jesus Christ His Son, the only way to the Father Jn.4:16, who die & pay for our sins, so people of all nations, race & languages could be together in Him (Rev. 7:9-11). That’s God’s plan or Divine wisdom.

A month later after this Higher Committee meeting at the UN headquaters, the “Abrahamic Faiths Initiative” inspired by the signing of same document of World Peace (see here), had a gathering in Rome of 25 Jewish, Muslim and Christian world leaders in January 14-16, 2020 at the Pontifical Gregorian University of Rome.  Callista Gingrich (wife of Newt Gingrich) nominated by president Trump in 2017 as U.S. Ambassador for the Holy See said in a speech “The United States is proud to support this Initiative, organized by the Multi-Faith Neighbors Network . . . The Abrahamic Faiths Initiative was inspired in part by the seminal Document on Human Fraternity and Living Together, signed by Pope Francis and the Grand Imam of Al-Azhar in Abu Dhabi last year. Indeed, this Initiative responds directly to their invitation to reconciliation and fraternity among all believers and people of good will”.

-Same month on January 28, 2020, president Trump presented his vision for Middle East Peace Plan in the White House, to prime minister Benjamin Netanyahu. The White House briefings stated: “President Donald J. Trump recognizes it is time for a new approach to achieve peace, security, dignity, and opportunity for Israel and the Palestinian people.” What I found later is UAE was also present in that meeting “The United States and Israel recall with gratitude the appearance of the United Arab Emirates at the White House reception held on January 28, 2020, at which President Trump presented his Vision for Peace, and express their appreciation for United Arab Emirates’ related supportive statements.”

On August 13, 2020 there was an announcement of a historical peace accord between Jews an Arabs that proponents say it will bring Peace & Security in the Middle East. Many Christians haven’t realized yet that this ‘Abraham Accord’ is part or a continuation of the same document signed by Pope Francis & the Grand Iman of Al-Azhar in Abu Dhabi last year, which includes nations & it was made possible because of the support and efforts of Sheikh Mohamed bin Zayed Al Nahyan, Crown Prince of Abu Dhabi, UAE.

Trump announces historic peace agreement between Israel & UAE. He said that expects more Arab countries to “follow the United Arab Emirates’ lead.” & also stated “I made clear that the problems of the Middle East can only be solved when people of all faiths come together“. (see also video of J. Kushner). In an interview Kushner said: Israel-UAE deal is the culmination of three & a half years of diplomacy, which included also talks with the Pope.

-We know one of those talks was the closed-door meeting of VP Pence with the Pope, Mike Pence & Pope Francis meet in a long first visit, (1). Pence once said, “I made a commitment to Christ. I’m a born-again, evangelical Catholic.” The Pope gave him a medallion depicting “the angel of peace,” a copy of his message World Day of Peace 2020, as well as copies of some of Pope’s writings, including “The Joy of the Gospel” and the environmental encyclical “Laudato Si” inspired in the works of mystic St. Francis of Assisi (first stigmatic recorded, that did penances like long vigils, frequent flagellation, etc). That commitment was symbolically underscored by the presentation of a green Tau Cross to all signatories.

The Tau Cross is considered Saint Francis’s “trademark”. ( to see meaning of Tau scroll to the bottom of link). That’s also same cross that Constantine saw in his vision ‘on this sign conquer’.

I agree on being a good steward of God’s creation, but this encyclical is really an ecology movement taken to the extreme, bringing people to worship mother earth. Please see some ‘Laudato Si‘ in action, which also includes talking, praying to animals & spiritual salvation of animals, (1, 2, 3, etc.). This ‘Laudato Si’ is going on one direction, which the Bible mentions about the last days in 1 Timothy 4:3 : “forbidding to marry, and commanding to abstain from meats, which God hath created to be received with thanksgiving of them which believe and know the truth“.  -Please see Update Jul. 11th 2022

The Abraham Accord will include establishing embassies and exchanging ambassadors, investments into the Israeli security, education, trade, economy, direct flights between Tel Aviv and Abu Dhabi, health care trade, including an investment in Israeli efforts to develop a coronavirus vaccine, visits of Arabs to the Dome of the Rock , etc.

“Now about the times and seasons, brothers, we do not need to write to you. For you are fully aware that the Day of the Lord will come like a thief in the night. When they say “Peace and security,” destruction will come upon them suddenly, like labor pains on a pregnant woman, and they will not escape. But you, brothers, are not in the darkness so that this day should overtake you like a thief For you are all sons of the light and sons of the day; we do not belong to the night or to the darkness. So then, let us not sleep as the others do, but let us remain awake and sober” 1 Thess.5:1-6

These statements of ‘peace & security’ (see video , & also on day of unveiling Peace plan, etc.) are prophetic 1 Thess.5:1-6 & very significant now that Jerusalem is the capital of Israel once again.