Addendum to the 10 Commandments?

We can see the New World Religion finishing the last details to be presented globally. First in September 14th 2022, there was an interfaith meeting for peace, with religious leaders of 50 countries at the World Religious Congress,  & recently Nov. 6-18, in Egypt at the Climate Change Summit of the UN called “COP 27” some religious leaders proposed an addendum to the 10 commandments:

SHARM EL-SHEIK, EGYPT–Amid the United Nations COP27 “climate change” conference in Egypt, Religious leaders from various faith traditions gathered in Sinai, London and Jerusalem to repent of their climate sins and unveil what one organizer described as an “addendum” to the Ten Commandments. In this interview with The New American magazine’s foreign correspondent and senior editor Alex Newman, the figures also touched on what was referred to as a “Third Covenant” to build on the two referenced in the Bible. The controversial exercise, which is deeply intertwined with UN efforts to bring religious people on board, drew heated criticism from various Christian voices and Americans concerned about globalism and efforts to unify world religions.

See all of TNA’s COP 27 coverage at: https://thenewamerican.com/tag/cop/

DISCLAIMER: Views and opinions expressed in this interview are solely those of the interviewee and do not necessarily represent those of The New American. TNA is not responsible for, and does not verify the accuracy of any information presented.

They are not melting into one yet, but they are being officially organized with global authority & later those that won’t accept their new religion proposal or oneness, will be persecuted. But don’t be afraid the Lord won’t leave us, nor forsake us.

You may notice their logo is a sun w/ 13 rays in the superior half & like 9 hands in the lower section. Those hands looked familiar, then I remembered I had seen them before on an ancient Egyptian relief (when looking for information about the ouroboros). 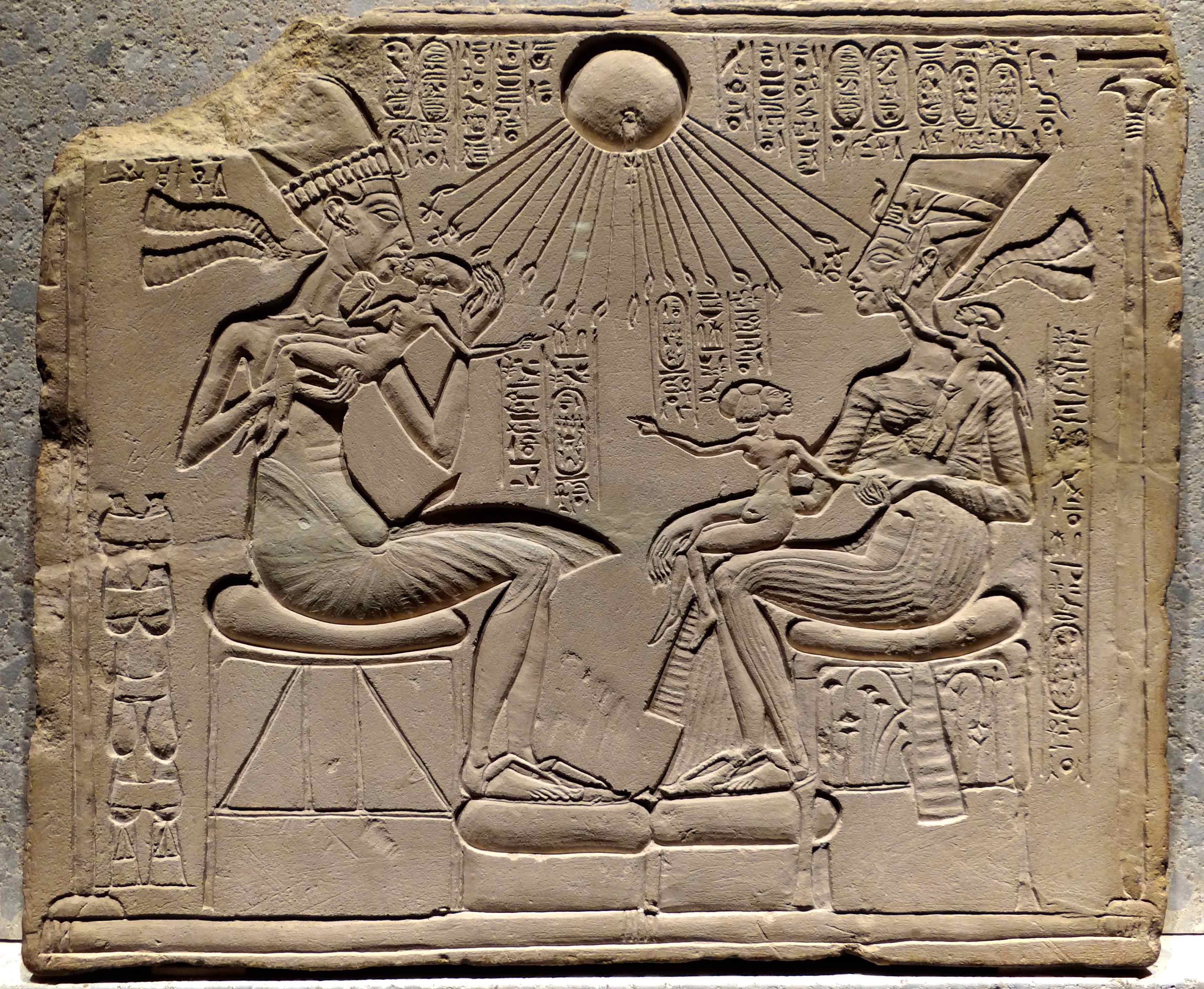 Pharaoh Akhenaten (father or grandfather of Tutankhamun) broke a long tradition of worship of  multiple gods to replace it with the worship of a sole deity, the sun god (Aten). Here Akhenaten worshiping the Aten as a family.

So it’s clear to me that their logo is their sun god Aten (sun disk god, w/long hands representing the sunlight rays or corona) & the ‘worship of a sole deity or composite god‘ is also their plan behind these climate change & interfaith meetings.  But we know they won’t choose Almighty God, our creator, they will rather continue worshiping one of God’s creations who is a revel & his false messiah.

Things will continue to get worse since the enemy knows he has a short time. But God’s people needs to be prepared spiritually for battle, we need to surrender to His will & seek His face. He will equip us, but we need to be really separated for Him & not mingle with the world any longer. This are serious times but the Lord has prepared us for such a time as this. Be ready beloved!

I believe we have entered the ‘Beginning of Sorrows” mentioned in Mat.24:7-8.

“For nation will rise against nation, and kingdom against kingdom. There will be famines, epidemics, and earthquakes in various places. 8 All these are the beginning of sorrows.”

The earthquakes reminds me about some plans of the enemy exposed by a Christian journalist, I think it has started to develop, & if so then we’ll see an increment on earthquakes & volcanic eruptions, and at some point very soon, we will be presented with new FAKE discoveries (exposed by the earthquakes) that will make people doubt the teachings of the main religions.

No long after that, we may see a  simulation of the coming of the ‘christ/universal messiah’ with technology & holographic projections in the sky, of simultaneous images in different regions of the earth in their own language, along with new religious teachings to unite us all as ONE. They may even simulate a FAKE rapture, and I believe all this represents the great deception with signs & wonders spoken on Matthew 24:23-25. Also in Luke 12 & Mark 13.

Then He said to them, “Nation will rise against nation (G1484= race, ethnic group, tribe, group of people) , and kingdom against kingdom. 11 And there will be great earthquakes in various places, and famines and pestilences; and there will be fearful sights and great signs from heaven.” Luke 21:11,

So this won’t take us by surprise. (I believe here nation against nation (G1484) may refer to civil wars & riots, and kingdom against kingdom refers to nations).

According to the Christian journalist the plan consist of four stages:

First, earthquakes will expose new archaeological discoveries, revealing that all religions’ basic doctrines have been misunderstood and misinterpreted.

Second, the image of God speaking in all languages will appear in a gigantic Space Show with laser projections of multiple 3-dimensional holographic images worldwide showing the false ‘christ’ maitreya, the new world messiah for the immediate implementation of the new world religion.

Third, electronic telepathy involving ELF, VLF, and LF waves will reach inside brains, interlacing and interweaving with the natural thinking to form diffused artificial thought and making everyone believe that God is speaking to them from within their own souls.

Fourth, electronic universal “supernatural” manifestation designed to deceive will make mankind believe an alien invasion is imminent, make Christians believe a rapture is imminent and the aliens have come to rescue them, and convince all that global satanic supernatural forces and manifestations penetrating worldwide–traveling through optical fiber, coaxial cable, electric and phone lines–are everywhere and inescapable. This part contains three different orientations.

These are not prophecies but plans of men that worship the adversary, so things may have slight changes & prayers can advert many things, it has also been delayed several times. But eventually the world will reap what they have been sowing.

Before all these global events happen, it seems the enemy has prepare darkness & a series of events for the US (& some other countries). Please pray for this country, for all the people that leave on the coasts or what the Lord brings to your heart. May God bless you & keep you in His ways always.