The following is a picture and excerpt from the ‘Satanic Bible’: (We pray protection for the viewers in the name of Jesus Christ, the Son of the living God). The only purpose of this pictures is to expose the enemy & his works of darkness.

Horned Hand or The Mano Cornuto: This gesture is the Satanic salute, a sign of recognition between and allegiance of members of Satanism or other unholy groups. 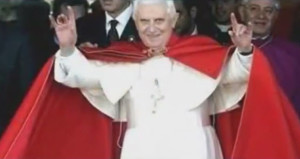 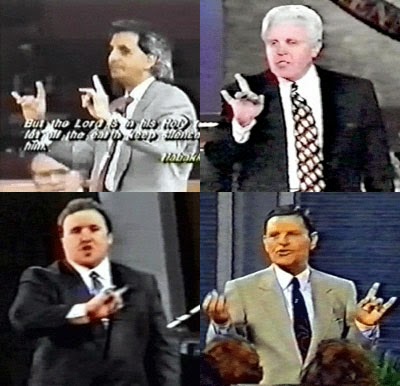 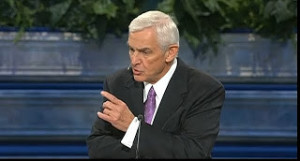 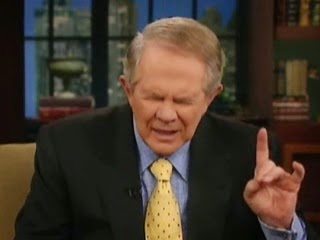 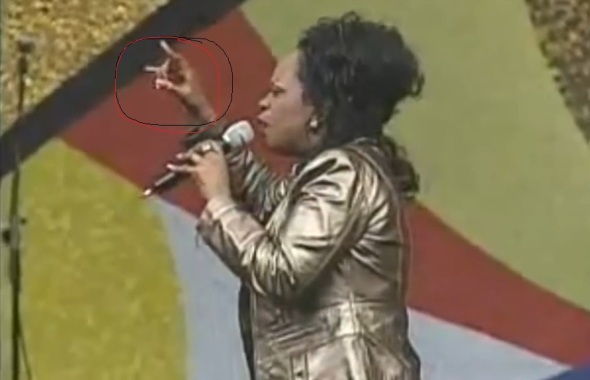 Many people use also the ‘I love you‘ sign, which is very similar, but what they don’t know is that the person who created the sign language Hellen Keller was an occultist & a Theosophist.

I know this is very difficult to believe, it’s tragic, it’s also scary, but even if you are not completely convinced that this is true, please exercise caution with these Word of Faith preachers as well as the New Apostolic Reformation , and all of those that have good connections or alliances with them. People usually take time and check every detail when buying a car or a house, how much more should we do when choosing a teacher of God’s Word? The Word of God tell us to test the spirits in 1 John 4:1, are we doing this?

Why would the Holy Spirit contradict Himself ?  or create confusion?  No, He would not, He is Holy!  The common denominator in these manifestations is the fact that they are uncontrollable.  But Paul says the spirits of the prophet is subject to the prophets,  (1 Corinthians 14:32) so there can be right order in the church.  So it doesn’t sound it is uncontrollable. Also the bible tells us:

“But the fruit of the Spirit is love, joy, peace, long-suffering, gentleness, goodness, faith, meekness, temperance (#G1466 self control): against such there is no law.” Gal. 5:22-23

“In 1983, Bob Jones prophesied to Mike Bickle that he would be a part of leading a worldwide youth movement of prophetic singers and musicians who intercede for the nation of Israel. He said that the movement will have a ministry like President Harry S. Truman, one of the greatest “political intercessors” for Israel. He then told him that we would move right next to Harry S. Truman.”

IHOP ended up buying Truman’s property.  But what they don’t mention is that Truman was a 33o Mason.
The complex have a street named Harry S. Truman Drive, a new Truman Prayer Centre that was scheduled to open on summer 2013, and a Truman Corners Shopping Center.  (Later phases call for dorms, a hotel and office towers, said Erin Bardon, who is not an IHOP member but an architect in the project). 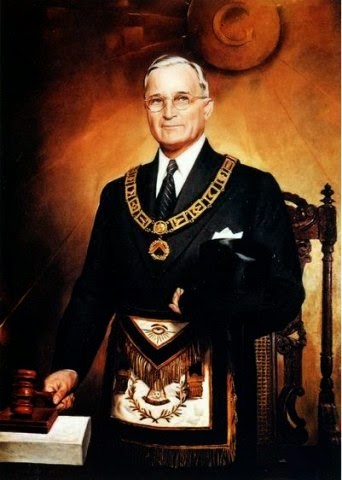 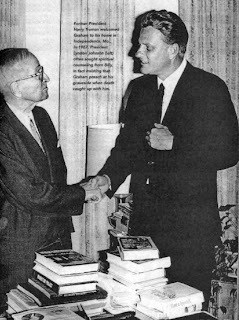 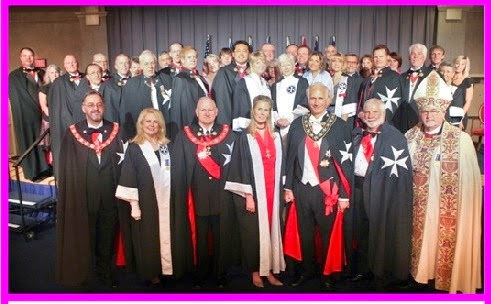 Ecumenical Order of St. John of Jerusalem, Knights of Malta

The grand master of both Rick Joyner & Boykin seen here in the picture, is Nicholas Papanicolaou a Freemason member of the Masonic Order of Amaranth,  Also the Knight of Malta Cross and the double headed eagle are both Masonic symbols, as well as are their ceremonies, protocols, etc. The principal requirements to enter the Order are: (i) a strong commitment to the Roman Catholic religion and (ii) having achieved distinction in civil society. (like masons or militaries). Papanicolaou & Boykin work closely with Rick Joyner in his Oak Initiative.  In their page you can find that all their leadership and board of directors are part of Billy Graham’s ecumenical Lausanne Covenant, and many of them, if not all, are also Freemasons.

Pagan origins of the Cross pattee or Cross of Malta. Knights of Malta use a white cross & Knight Templars use a red cross. 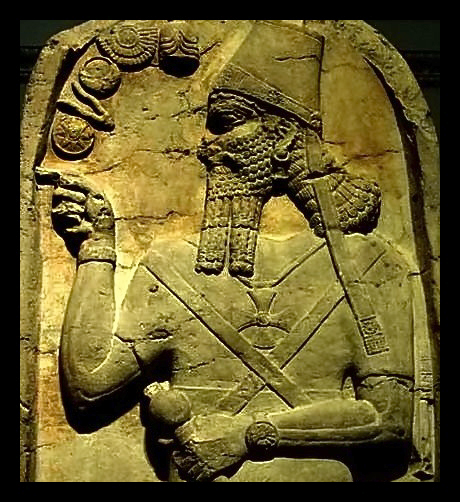 In Moravian Falls, North Carolina, Rick Joyner has shared that he and his staff have had numerous angelic visitations on their property that was once owned by Count Von Zinzendorf and the Moravian community of faith. They say several portals exist on this land which had been prayed over by the Moravian brethren for over 100 years. here.  Also check Mike Bickle, Rick Joyner and their adoration of  Count Zinzendorf & Moravian .  Count Von Zinzendorf was part of the aristocracy & was involved in a Masonic Order, a Rosicrucian, and used metaphysical rituals that he learned from the Kabbalah, check here.  He started the prayer movement of 24/7 that Mike Bickle and Peter Grieg revived. He also started the Order of the Mustard Seed. 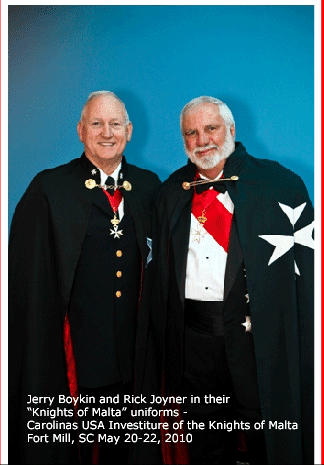 The Knights as well as Jesuits made oaths/vows to be guided by and to protect their orders and their mother church against the true Christians. What the Bible says about oaths: “But above all things, brethren, swear not, neither by heaven, neither by the earth, neither by any other oath: but let your yea be yea; and your nay, nay; lest ye fall into condemnation.” James 5:12

Most churches pastored by these leaders are full of manifestations that they call ‘signs and wonders’ and say come from the Holy Spirit.  The manifestations of gold dust, feathers, gems, diamonds, oil, stigmatas, etc. seen in most of these churches reminds me of the manifestations seen in the Mary apparitions & worship, etc. of the Catholic Church.   We just need to be very careful and try the spirits as the Word of God says:

“Beloved, believe not every spirit, but try (test) the spirits whether they are of God” 1 John 4:1

Many Christians don’t know that to be slain in the spirit, or laying of hands, is also seen in New Age teaching, and is related directly to the Hindu practice of the Shakti Pat that has been practiced for thousands of years:

“Shakti Pat or Divine Touch Robert Walker described what takes place in Kundalini yoga: ‘Few Christians realize that for thousands of years gurus have operated with gifts of healing, miracles, gifts of knowledge, and intense displays of spiritual consciousness as they stretch out and connect with a cosmic power which, though demonic in origin, is very real. The meetings which mystic Hindu gurus hold are called ‘Darshan’. At these meetings devotees go forward to receive spiritual experience from a touch by the open palm of the hand, often to the forehead, (also the part they call the 3rd eye) by the guru in what is known as the Shakti Pat or divine touch. The raising of the spiritual experience is called raising Kundalini. The practice is quite intricate but is brought on by Shakti Pat in conjunction with the repetition of mantras or religious phrases and by holding physical positions for a long time. After a period when the devotee has reached a certain spiritual elevation they begin to shake, jerk, or hop or squirm uncontrollably, sometimes breaking into uncontrolled animal noises or laughter as they reach an ecstatic high. These manifestations are called ‘Kriyas’. Devotees sometimes roar like lions and show all kinds of physical signs during this period. Often devotees move on to higher states of spiritual consciousness and become inert physically and appear to slip into an unconsciousness when they lose sense of what is happening around them. This state is called ‘samadhi’ and it leads to a deeper spiritual experience”  Discern it

“33 Mason, Manly P. Hall writes that Hiram Abiff is symbolic of the Spirit Fire of the Kundalini of Hindu mysticism. This is an extremely dangerous occult practice and shows the very real danger of coming into contact with demons during occultic initiations”  Ritual abuse.

It was back in 1991 at a Benny Hinn Crusade that we see Rodney Howard Browne is on stage and called forward by Hinn, “Rodney, God has given you a great anointing for this ‘ referring to the laughter anointing.  So t was Hinn who gave Rodney the laughter anointing, from there to Randy Clark, Toronto Blessing, etc.  Also notice how a word is repeated many times. Repeating over and over a word is called mantra in New Age, a technique used to enter into a “trance” or altered state of consciousness, also used in hypnosis.   Rodney says he is the Holy Ghost bartender.   (Update: This is the 3rd time in less than a month that this video is deleted from a different youtube account, but you can find a similar copy of same crusade, not as good quality here).  This other video is reporting the death of 2  employees of Benny Hinn in the local news .

John MacArthur a 5 point Calvinist (Reformed Theology) teacher, has a good reputation as being doctrinally sound. To know more about what a Calvinist believe please go here & here.

I’m not stating he is or is not a Mason but that certainly he has good connections with them and you can make your own conclusions by reading the links below. I know this may shock & upset many, but we don’t follow men but Christ. This is not a personal attack on Mr. MacArthur’s character, his sincerity, his salvation or Christian experience. I am interested only in the soundness of his doctrine, whether or not his statements are true, especially because he’s a very popular bible teacher.

Among other things, his popular book, ‘Slave: The Hidden Truth About Your Identity in Christ‘, has references to the heretical works of some Gnostic, modernist & postmodern scholars who deny the fundamental doctrines of the Christian faith. That in it self, is very shocking.  e.g. (pg 38) Yale Professor Dale B. Martin, (1) an admitted homosexual who also has a book named ‘Slavery as Salvation‘. In his book ‘Sex and the Single Savior’ blasphemes Jesus Christ as a homosexual, and is dedicated to Bart D. Ehrman (pg. xii).  Bart D Ehrman is also cited by MacArthur as translator of the Shepherd of Hermas. Ehrman writes books that debunk the Bible and promote the false God and counterfeit Jesus found in non-canonical writings.”.  Also he cited (pg. 29) The Shepherd of Hermas– an Apocryphal work identified by Theosophist H. P. Blavatsky as a “kabbalistic” text.  See more information : MacArthur

“Henceforth I call you not servants (slaves); for the servant knoweth not what his lord doeth: but I have called you friends; for all things that I have heard of my Father I have made known unto you. John 15:15 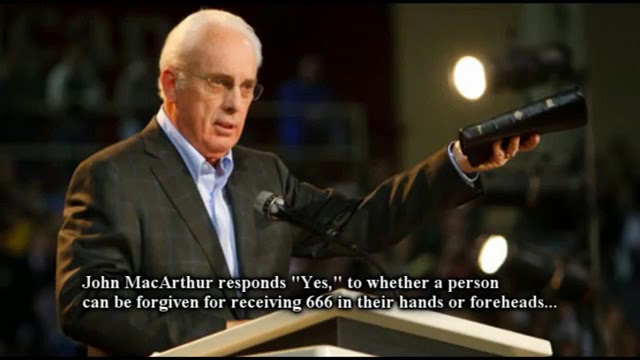 – John Fullerton MacArthur – pastor of Grace Community Church,  teaches that those who take the Mark of the Beast during the Tribulation period can still be redeemed. – The Mark of The Beast

–Encounter with John MacArthur & his bodyguards

His spiritual mentor was a Jewish Rabbi. There is a lot of controversy on his teaching regarding that the Blood of Christ doesn’t save us, but is just symbolic of His death. See also here.

Even he often preaches against ecumenism, MacArthur frequently speaks at ecumenical forums, such as the Moody Bible Institute Founder’s Week. For example, at the February 1986 Moody Bible Institute conference, MacArthur joined hands with two of the chief ecumenists of our day, Billy Graham and Luis Palau. Both Graham and Palau regularly join together in ecumenical relations with Roman Catholics. In July 1988, MacArthur spoke at the Congress on the Church and the Disabled at the Billy Graham Center at Wheaton College, which featured Roman Catholic and New Evangelical speakers (Moody Monthly, Oct. 1988). But he still speaks in the Moody Bible Institute until today, here is their conference in 2013.  More on MacArthur teachings & recommendations.

Video Documentary : Did Augustine Corrupted The Church With Gnostic Doctrine?

Masonry in the Church? – Introduction

Masonry in the Church? – Counterfeit Christianity