April 13, 2016 / cristolaverdad
This entry is part 3 of 4 in the series Calvinism
Calvinism

i. Our first parents, being seduced by the subtlety and temptation of Satan, sinned in eating the forbidden fruit. This their sin, God was pleased, according to His wise and holy counsel, to permit, having purposed to order it to His own glory.

II. By this sin they fell from their original righteousness and communion with God, and so became dead in sin, and wholly defiled in all the faculties and parts of soul and body.   – Westminster Confession of Faith, Chapter 6 (Calvinist Catechism).

John Calvin regarding the lost : “it was his good pleasure to doom to destruction” (Institutes of the Christian Religion, III:xxi,7.)

But the Word of God says:

R.C. Sproul wrote in his book ‘Chosen by God’ pg. 15, that anyone who doesn’t agree with his Calvinistic belief (as expressed in the Westminster Confession of Faith) about predestination –God’s determination of ALL events– then he should be a ‘convinced atheist‘. To Calvinists God’s determination is God’s sovereignty. But Sproul doesn’t seem to understand that many ‘Christians’ agree with him that God’s Sovereignty (supreme Power & Authority) is an essential part of God’s Attributes, but at the same time we completely disagree with his interpretation of that sovereignty. We don’t question God (like some of them like to point out), we just question the Calvinistic interpretation.  In pg. 26 he states “If He decides to allow something, then in a sense he is foreordaining it.”  Sproul also repeats the words of Jonathan Edwards, by saying “What God permits, he decrees to permit” including sin. In other words God’s permission is willing. 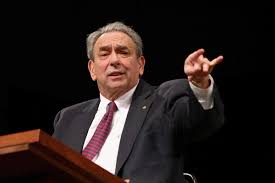 Also, his son, wrote that is God himself, who “introduced evil into this world” (Almighty Over All, p. 51).  Regarding the origin of evil in the garden he stated: ‘In fact, God acted according his strongest inclination; he acted on what he most wished to come to pass—as he always does. God wills all things that come to pass…God desired for man to fall into sin…God created sin.” (R.C. Sproul, Jr., Almighty Over All , p. 54).

Edwin Palmer: “All things that happen in all the world at any time and in all history—whether inorganic matter, vegetation, animal, man or angels (both good and evil ones– come to pass because God ordained them, Even sin– the fall of the devil from heaven, the fall of Adam, and every evil thought, word, and deed in all of history.” The Five Points of Calvinism, 1999

Writings from Christians of the early church, before Calvinism existed, contradict their view:

“Let some suppose, from what has been said by us, that we say that whatever occurs happens by a fatal necessity, because it is foretold as known beforehand, this too we explain. We have learned from the prophets, and we hold it to be true, that punishments, chastisements, and good rewards, are rendered according to the merit of each man’s actions. Now, if this is not so, but all things happen by fate, then neither is anything at all in our own power. For if it is predetermined that this man will be good, and this other man will be evil, neither is the first one meritorious nor the latter man to be blamed. And again, unless the human race has the power of avoiding evil and choosing good by free choice, they are not accountable for their actions.” -Justin Martyr, First Apology, XLIII (100-165 A.D.) –

“But man, from the fact of his possessing a capacity of self-determination, brings forth what is evil, that is, accidentally; which evil is not consummated except you actually commit some piece of wickedness. For it is in regard of our desiring anything that is wicked, or our meditating upon it, that what is evil is so denominated. Evil had no existence from the beginning, but came into being subsequently. Since man has free will, a law has been defined for his guidance by the Deity, not without answering a good purpose. For if man did not possess the power to will and not to will, why should a law be established? For a law will not be laid down for an animal devoid of reason, but a bridle and a whip; whereas to man has been given a precept and penalty to perform, or for not carrying into execution what has been enjoined. For man thus constituted has a law been enacted by just men in primitive ages.” (Hippolytus, ( 170-236 AD) Against all Heresies, Bk. X, ch. xxix)

Under God’s sovereign rule and within his sovereign will, he allows man to make free choices. . . .

However Calvinist themselves consider that Hyper-Calvinism ‘is the belief that God saves the elect through His sovereign will with little or no use of the methods of bringing about salvation (such as evangelism, preaching, and prayer for the lost). To an unbiblical fault, the hyper-Calvinist over-emphasizes God’s sovereignty and under-emphasizes man’s responsibility in the work of salvation“. Quote from Calvinist page, Got a Question?

I don’t know of anyone who considers himself a Hyper-Calvinist. No Calvinist like to be called extreme, so they evangelize, but while omitting their believe that the offer is limited only to a few (that when they say Jesus died for your sins they only mean the elect,). But they call Hyper or extreme, their Calvinist brother that is honest or consistent about their Calvinistic view on election.  See more: Why Hyper-Calvinism Is Consistent Calvinism.

Next are some examples of how some Calvinists over emphasize God’s Sovereignty but neglects God’s other attributes, His wisdom, His justice, His love and also His command to love others. 1 John 4:7-9.  None of these men are called Hyper-Calvinist by other Reformers because they evangelize, but if this  is not extreme I don’t know what else could be . .  decide for yourself. 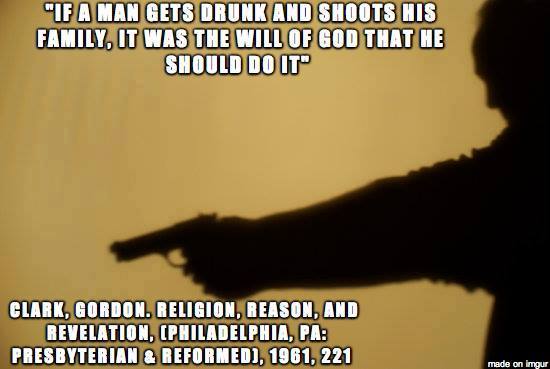 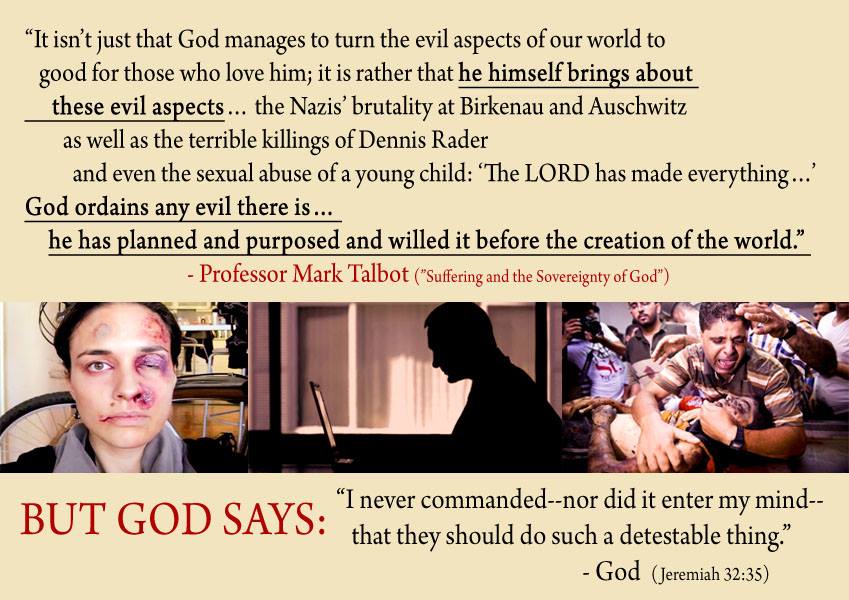 Calvinist theologian James White teaches the same thing. The rape of a child ordained by God?  They say because everything happens according to His plan, for His glory! How can God be glorified by that deprave & demonic act? &  how is then God different from Satan in terms of character?    Calvinism distorts the character of our Holy and loving Father & make Him look like the god of this world. How can we as Christians stay silent about this matter or promote these teachers & their theology?

We know God’s character because He revealed Himself in His Word & through His son Jesus who died for us. God is Holy & undefiled.

Love suffers long and is kind; love envies not; love flaunts not itself and is not puffed up,does not behave itself improperly, seeks not its own, is not easily provoked, thinks no evil. 1 Cor. 13:5

He is the Rock, His work is perfect; For all His ways are justice, A God of truth and without injustice; Righteous and upright is He. Deut. 32:4

Wherefore now let the fear of the Lord be upon you; take heed and do it: for there is no iniquity with the Lord our God, nor respect of persons, nor taking of gifts. 2 Chro. 19:7

For thou art not a God that hath pleasure in wickedness: neither shall evil dwell with thee. Psalms 5:4

Your eyes are too pure to look on evil, and You cannot look on wickedness. Habakkuk 1:13

This then is the message which we have heard of him, and declare unto you, that God is light, and in him is no darkness at all. 1 John 1:5

And they built the high places of Baal, which are in the valley of the son of Hinnom, to cause their sons and their daughters to pass through the fire unto Molech; which I commanded them not, neither came it into my mind, that they should do this abomination, to cause Judah to sin. Jeremiah 32:35

Baptist pastor Dave Hunt writes answering to Calvinist James White: “White contents that if God doesn’t decree evil, ‘evil has no purpose.’ Evil must have a purpose? Yet evil comes from man’s heart (Matthew 15:19) and ‘worketh not the righeousness of God’ (James 1:20). God allows evil and can prevent, control, or use it, even for good (Genesis 50:20), but He doesn’t even tempt anyone to evil (James 1:13), much less decree it.” (Debating Calvinism, p.327).  – “God calls Israel’s sin ‘this abominable thing that I hate’ (Jeremiah 44:4), yet we are called upon to believe that He foreordained it? We are to believe that God caused Israel to practice things that were abominations to Him?” (Debating Calvinism, p.313)

Calvin writes: “For myself, I take another principle: Whatever things are done wrongly and unjustly by man, these very things are the right and just works of God. This may seem paradoxical at first sight to some….” (Concerning the Eternal Predestination of God, p.169)

Calvinists teach that God decrees sin, foreordains sin, created sin, was pleased with sin but still some also teach that this does not make God the ‘author’ of sin. This is a contradiction , don’t they understand  that the mastermind behind any crime is always guilty? Read the story of king David.

5 point Calvinist John MacArthur in his book, ‘Slave: The Hidden Truth..‘, has favorable references to the heretical works of some men who deny the fundamental doctrines of the Christian faith.   e.g. (pg 38) cited Yale Professor Dale B. Martin,who is openly gay and well-known for his gay-leaning interpretations & has a book named ‘Slavery as Salvation‘. In his book ‘Sex and the Single Savior’ he attempts to prove that Jesus was a homosexual, he dedicated this book to Bart D. Ehrman (pg. xii). Bart D Ehrman is also cited by MacArthur as translator of the Shepherd of Hermas.  But Ehrman writes books debunking the Bible. More Here.  Also cited (pg. 29) The Shepherd of Hermas– an Apocryphal work identified by Theosophist H. P. Blavatsky as a “kabbalistic text. and many others. Please see MacArthur.  MacArthur favorably quotes Jack Hayford & the Contemplative pioneer Dallas Willard , he also promotes the gospel of  Lordship Salvation.

NOTE: We are not attacking or questioning the Calvinists Salvation or their character, only their doctrine in light of the Scriptures, because it contradicts the Word of God. There is a big difference between  exposing error using Scriptures and hateful character assassination. We are not aiming at the messengers but at the message (doctrine).

Some when confronted with a doctrinal error that is taught by them, don’t use the Word of God to defend it or support it, but often attack the character of the person that is showing the error, we don’t do that, not even when many of them do it to us.

We avoid following men & are very careful with their teachings, or their interpretations of the bible, (Col. 2:8, Mark 7:7-9, etc).  Our final authority in doctrine & morals is the Word of God, not men (nor their catechisms or doctrines).  We are not perfect, (no men is), the Lord Jesus Christ alone is our righteousness. We are grateful for God’s mercies every day.  Lamen. 3:23 , & all glory goes to Him alone.

The Love of God: A Powerful Refutation of Calvinist Doctrine

Does God Predestine EVERYTHING?

5 points Out of Calvinism

Is God the Author of Sin?

Commentary: The Attributes of God

The Parable of the Wicked Fireman

Did God ordained the fall of man? Decreed rape? – video

The Five Points of Calvinism: Weighed and Found Wanting

Calvinism & who was John Calvin

Is the ESV a Trustworthy Translation?

Words of Calvinism & The Word of God