April 11, 2016 / cristolaverdad
This entry is part 1 of 4 in the series Calvinism
Calvinism

We understand Calvinism is a divisive and controversial issue, but we believe it must be faced because it is growing, and affects the Gospel of Salvation and the very Person of God. Brushing it under the carpet has made the problem worst with time. And as some Reformed have recognized ‘What could be more relevant to the Gospel than how sinners are saved? ‘

What makes things more difficult, is that we know there are many nice, God loving & sincere people involved in this religious system, a lot of them get in it by default, thinking they need to choose between Calvinism or Arminianism. But they don’t have to follow any men’s doctrine, just Jesus Christ & His Word. Many that follow this doctrine don’t even know who was John Calvin, or haven’t read his writings.

“God preordained, for his own glory and the display of His attributes of mercy and justice, a part of the human race, without any merit of their own, to eternal salvation, and another part, in just punishment of their sin, to eternal damnation.” ― John Calvin

“I admit that in this miserable condition wherein men are now bound, all of Adam’s children have fallen by God’s will.” (John Calvin, Institutes of Christian Religion, Book 3, Chapter 23, Paragraph 4)

Teachers that believe in Reform theology sadly mix the Word of God (Truth) with their Calvinistic interpretations (errors), so at first glance it appears that their sermons are good, specially if we don’t know their semantics or what to look for. Also there are divisions among them, some are more consistent with Calvinism than others, for this reason is very difficult for many Christians to see their errors.

Calvinism also called Reformed Theology is a theological system that came about in the 16th century after John Calvin read & followed St. Augustine’s, teachings, a Catholic monk that was influenced by Gnosticism & prayed to Mary for salvation.

Calvinism follows the teachings of John Calvin. (Short 8 min. video ).  Calvinism have many distinctive doctrines found in the Catechisms of  Westminster Confession of Faith but the main ones consist in 5 points known by the acronym T.U.L.I.P. This system of theology was reaffirmed by the Synod of Dort in 1619 as the doctrine of salvation. This theology is also called the doctrine of Grace. But in short Calvinism is a theological system that emphasizes God’s Sovereignty & His eternal decrees. 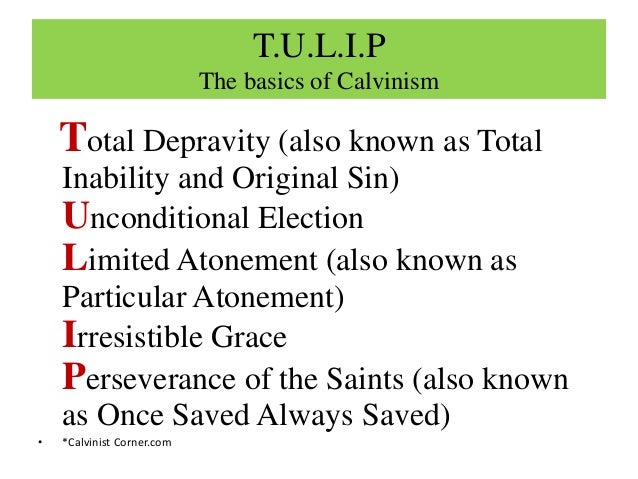 If Calvinism is right, & you are a Calvinist then you should not (& I sincerely hope you don’t) get offended by this series of posts, because you should believe everything was predetermined by God, ( including this post),  and everyone that was elected will go to heaven and what ever we do, won’t change anything, so there is no harm done in our part, you don’t have anything to worry about.

But in the other hand please try to understand our position, if Calvinism is wrong & I believe it is, then it’s perverting the gospel of Christ & also it’s perverting God’s character. Calvinism teaches His love is just for a few but His hate is for the majority of humanity created in His image. It also portraits a God who decrees that people do what He forbids or hates, a God who contradicts Himself, and that also ordains sin & evil.

Calvinism is causing much division among God’s people. And out of love we feel the need to warn people about it, including Calvinists, because we know many brothers & sisters in Christ unfortunately follow this theology.

Most Calvinist teachers & theologians believe in the 5 points of Reformed Theology , we are going to mention in this post the first 2 points. For more information you can go to this link: The 5 Points of Calvinism, or may check links on ‘Related Articles’ at bottom of page.

Total Depravity a doctrine derived from the Augustinian concept of original sin, teaches that man is born totally depraved & evil from birth, is dead, not able to hear or believe the gospel.  Because of this doctrine most Calvinists have a wrong view of children’s innocence and some go to an unbiblical & very depraved extreme:

Jonathan Edwards a very admired teacher among many Calvinist (e.g.John Piper), wrote: As innocent as children seem to be to us, yet if they are out of Christ, they are not so in God’s sight, but are young vipers, and are infinitely more hateful than vipers.  –

Calvinist theologian Loraine Boettner said that every single human being (even a new born child) “is so morally blind that he uniformally prefers and chooses evil instead of good, as do the fallen angels or demons.” The Reformed Doctrine of Predestination, reprinted 2013.

J. Richard Fugate: ‘Perhaps the child who receives unfair treatment at the hand of his parents requires just that kind of pressure in order to submit his will to God. Perhaps God is preparing such a child to glorify Himself through suffering just as Job did.

Voddie Baucham: “One of the reasons that God makes human babies small is so they won’t kill their parents in their sleep. They’re evil.”

A must read for parents Homeschoolers Anonymous.org

But the Word of God says:

Take heed that ye despise not one of these little ones; for I say unto you, That in heaven their angels do always behold the face of my Father which is in heaven. Matt. 18:10

And when the chief priests and scribes saw the wonderful things that he did, and the children crying in the temple, and saying, Hosanna to the Son of David; they were sore displeased, And said unto him, Hearest thou what these say? And Jesus saith unto them, Yea; have ye never read, Out of the mouth of babes and sucklings thou hast perfected praise? Matthew 21:15-16,  Psalms 8:2. (H5797).

New born babies & little children are innocent, they don’t know right from wrong. But still many Calvinist believe un-regenerated babies are evil & go to hell because they have to pay for the sin of Adam. The problem is nobody knows which baby is elected. My heart goes out to the Calvinists parents when they loose a child, that besides their loss they have add to their suffering this crazy & unending nightmare.  –  Consistent Calvinism – Babies go to Hell!

Most Christians believe in men’s depravity, that salvation is of God only not of man, that man cannot safe himself or overcome sin on his own, but still we don’t agree depravity is total & some men are more deprave than others, and according to the Bible lost men are able to hear & believe the gospel.

Calvinism erroneously equates spiritual death with physical death. The physically dead can’t believe & can’t sin either. But the spiritually dead can sin and also can hear and believe:

A former Calvinist stated: ‘The Calvinist has exchanged a faith in Jesus that saves for a “faith” in a sovereign God who decreed his or her salvation unconditionally before the foundation of the world.‘ Steve Hitchcock

There are 3 religions that believe their followers are the elect, or selected for salvation: Jews (who don’t believe in Jesus), Jehovah’s Witness (who have a different Jesus & a lot of Gnosticism) & Calvinists/Presbyterians.  But the Scriptures state that Jesus died for the sins of the ‘whole world’, not just for a few. (1 John 2:2). God loves the world and sent His son Jesus Christ, not to condemn the world, but to save it. (John 3:16-17)

Those who believe in selective or Unconditional Salvation say God loves only the elect but “hates” all of the non-elect. Yet, we read in the Word of God, when the rich man turned his back on Jesus, the Bible said Jesus “loved” him (Mark 10:21). Do we believe God? God doesn’t lie or make mistakes but men do. Rom.3:4

This error about believing God loves only the elect & hates all the non-elect was caused by a misinterpretation of Romans 9.

Related Articles: (These links are not endorsements, we may have some doctrinal differences with some of them, but we consider the authors of these links brothers in Christ ).

A Question for My Beloved Calvinists

What love is this? Dave Hunt – Spanish

Why Selective Salvation Can’t be True

If God only loves SOME -his elect- Why cannot also we love SOME people?