Gospel according to John, Chapter 7:  Read &/or listen from the Bible.

John chapters 7 through 9 took place during the Feast of Tabernacles, and it is interesting to note that chapters 5 (Sabbath) & 6 (Passover) also revolved around other Jewish holidays. On each of these occasions the Lord went up to Jerusalem to deliver important discourses in which He identified Himself as the fulfillment of the spiritual significance that each of these feasts had. But we must also realize that each section addresses new issues of vital importance. Thus in chapter 5 the relationship of the Son to the Father was presented, while in chapter 6 it was His relationship to His true disciples. Now throughout this chapter 7 we will see that the dominant theme will be the relationship with the Holy Spirit.

7 1After these things Jesus walked in Galilee; for He did not want to walk in Judea, because the Jews sought to kill Him. 2 Now the Jews’ Feast of Tabernacles was at hand. 3 His brothers therefore said to Him, “Depart from here and go into Judea, that Your disciples also may see the works that You are doing. 4 For no one does anything in secret while he himself seeks to be known openly. If You do these things, show Yourself to the world.” 5 For even His brothers did not believe in Him.

Jesus’ family, who also participated in this celebration, began preparations to go to Jerusalem. And it was then that there was a certain disagreement between Jesus and his brothers. These brothers were the children that Joseph and Mary had after the virgin birth of Jesus. They had already been mentioned by John at the beginning of Jesus’ public ministry (Jn 2:12) and their names appear in (Mt 13:55). -Acts 1:14 says that Jesus’ disciples “all continued with one accord in prayer and supplication, with the women and Mary the mother of Jesus, and with His brothers.” So Jesus’ brothers eventually became believers and one of them, James, even became a Christian leader. But that’s after Jesus’ resurrection.

This was one of the 3 feasts (Passover, Pentecost & Tabernacles) that every Israelite was to celebrate in Jerusalem (Dt 16:16).  The Feast of Tabernacles lasted 7 days (Lv 23:42-43) and was celebrated 5 days after the great Day of Atonement or Yom Kipur (Nm 29: 7,12), therefore the idea of joy after redemption and forgiveness of sins was very prominent.

10 However, after His brothers had gone up to the feast, then He also went up, not publicly, but secretly. 11 Then the Jews looked for Him at the feast, and said, “Where is He?”

12 There was much complaining among the people concerning Him. For some said, “He is a good Man.” Others said, “No, He deceives the people.” 13 Yet no one spoke openly of Him for fear of the Jews.

14 Now about the middle of the feast Jesus went up into the temple and began teaching. 15 The Jews marveled, saying, “How has this Man become educated, having never been taught?”

16 Jesus answered them, “My teaching is not Mine, but His who sent Me. 17 If any man desires to do His will, he shall know whether the teaching is from God or whether I speak on My own authority. 18 He who speaks on his own authority seeks his own glory. But He who seeks the glory of Him who sent Him is true, and no unrighteousness is in Him. 19 Did Moses not give you the law, and yet none of you keeps the law? Why do you seek to kill Me?” . . . . . . .  24 Do not judge according to appearance, but judge with righteous judgment.”

The Jews implied that they had a problem accepting Jesus’ doctrine because He was not taught by them, they didn’t know where His teachings came from. But in His response, Jesus tells them that their real problem lay in the fact that they were unwilling to do God’s will (Jn.7:17). If we desire to follow God & do His will we need to know weather a teaching we hear is from God, from His Word or is from the teacher own interpretation & his own ideas Acts 17:11.

False teachers preach that we are not suppose to judge but this isn’t biblical, we are to judge, but with a righteous judgment, which is according with  God’s Word & not our own ideas. We need to judge to avoid danger & to separate false from sound doctrine. But we don’t judge to condemn people or to put them down, only to restore them, or to separate from evil deeds. More here. 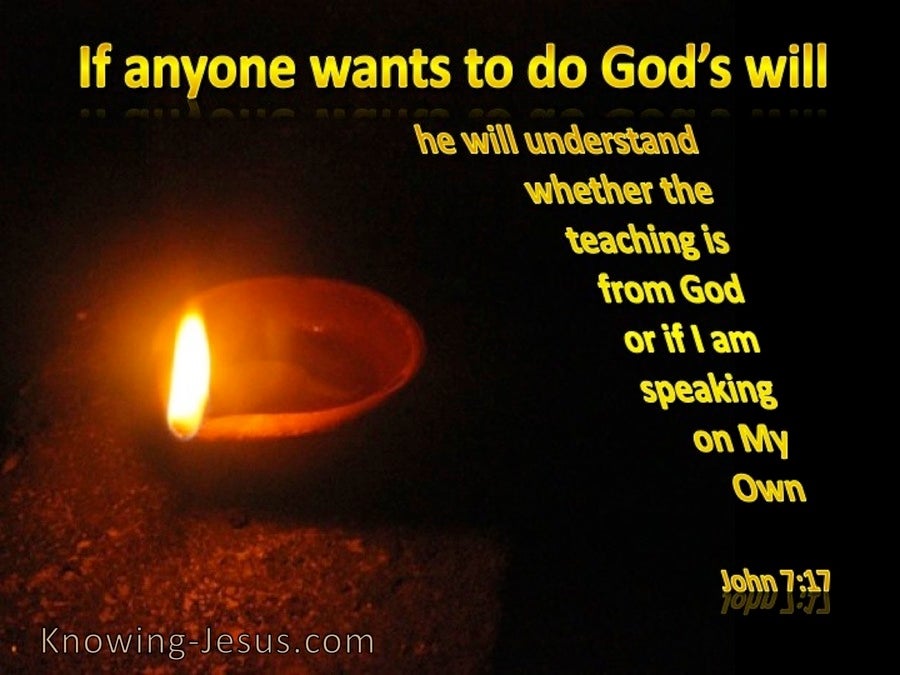 Regarding the development of the feast, different sacrifices were carried out to show the gratitude they felt towards God (Nm 29: 12-38). The festival reached its summit on “the last and great day of the feast” in which special ceremonies were held.
At the same time that sacrifices were offered, a priest, accompanied by a joyous procession with music, descended to the pool of ‘Siloam’ (which means ‘Sent’), from where he drew water that would later be poured next to the altar. With this outpouring of water they wanted to symbolize the future outpouring of the Holy Spirit (Is 44:3).

25 Now some of them from Jerusalem said, “Is this not He whom they seek to kill? 26 But look! He speaks boldly, and they say nothing to Him. Do the rulers know indeed that this is truly the Christ? 27 However, we know where this Man is from; but when the Christ comes, no one knows where He is from.”

28 Then Jesus cried out, as He taught in the temple, saying, “You both know Me, and you know where I am from; and I have not come of Myself, but He who sent Me is true, whom you do not know. 29 But I know Him, for I am from Him, and He sent Me.”

30 Therefore they sought to take Him; but no one laid a hand on Him, because His hour had not yet come. 31 And many of the people believed in Him, and said, “When the Christ comes, will He do more signs than these which this Man has done?”

In this passage there are a lot of questions about Jesus & who He is. They were addressing the question of the origin of Jesus Christ, but the people were divided over several  issues, that we will check on Pt.2.