Gospel according to John, Chapter 11:  Read &/or listen from the Bible.

38 Then Jesus, again groaning in Himself, came to the tomb. It was a cave, and a stone lay against it. 39 Jesus said, “Take away the stone.”

Martha, the sister of him who was dead, said to Him, “Lord, by this time there is a stench, for he has been dead four days.”

40 Jesus said to her, “Did I not say to you that if you would believe you would see the glory of God?” 41 Then they took away the stone from the place where the dead man was lying. And Jesus lifted up His eyes and said, “Father, I thank You that You have heard Me. 42 And I know that You always hear Me, but because of the people who are standing by I said this, that they may believe that You sent Me.” 43 Now when He had said these things, He cried with a loud voice (G2905= Cry aloud, shout), “Lazarus, come forth!” 44 And he who had died came out bound hand and foot with graveclothes, and his face was wrapped with a cloth. Jesus said to them, “Loose him, and let him go.”

What a joyful day for Lazarus’ family & friends! The raising of Lazarus is only mentioned in the Gospel of John & is the last miracle John mentions, since Jesus will be arrested and crucified not long after this. This to me was one of the greatest miracles found in the Bible, to raise a dead person, but then I realized, and see here a beautiful similitude with salvation. We were dead in trespasses and sins, for many years, but then we heard His voice, His Word & believed Him, & now we have been made alive to God, in Christ Jesus!  That’s the greatest of ALL the miracles!! And that was what Jesus really wanted to accomplish, salvation for all who believes in Him. 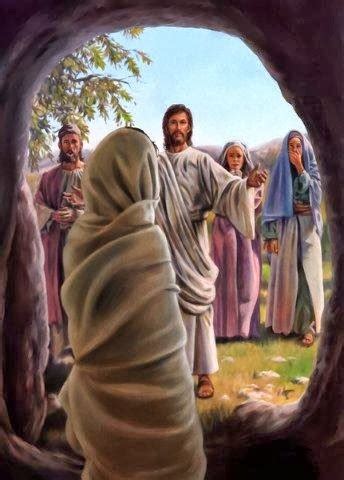 45 Then many of the Jews who had come to Mary, and had seen the things Jesus did, believed in Him. 46 But some of them went away to the Pharisees and told them the things Jesus did. 47 Then the chief priests and the Pharisees gathered a council and said, “What shall we do? For this Man works many signs. 48 If we let Him alone like this, everyone will believe in Him, and the Romans will come and take away both our place and nation.”

49 And one of them, Caiaphas, being high priest that year, said to them, “You know nothing at all, 50 nor do you consider that it is expedient for us that one man should die for the people, and not that the whole nation should perish.” 51 Now this he did not say on his own authority; but being high priest that year he prophesied that Jesus would die for the nation, 52 and not for that nation only, but also that He would gather together in one the children of God who were scattered abroad.

53 Then, from that day on, they plotted to put Him to death. 54 Therefore Jesus no longer walked openly among the Jews, but went from there into the country near the wilderness, to a city called Ephraim, and there remained with His disciples.

55 And the Passover of the Jews was near, and many went from the country up to Jerusalem before the Passover, to purify themselves. 56 Then they sought Jesus, and spoke among themselves as they stood in the temple, “What do you think—that He will not come to the feast?” 57 Now both the chief priests and the Pharisees had given a command, that if anyone knew where He was, he should report it, that they might seize Him.

Many people believed in Him that day, but sadly even the greatest miracles don’t guaranty belief. Now we understand why our Lord had previously said the following words, in Luke 16: 31 “If they do not hear Moses and the Prophets, neither will they be persuaded if someone should rise from the dead. ”

The chief priest & the Pharisees’ excuse in vs. 48, is a lie, because the Romans had already taken away their nation, but not their freedom of religion. So what they really were worried about was for their place as leaders to be taken away. Their place that they had on the top of all the social, economic & religious Jewish hierarchy. But it’s important to note that although they killed Jesus to supposedly safe the nation, the entire nation perished years later, in 70 A.D. when the Roman general Titus arrived and destroyed it.

From that day of the raising of Lazarus, they plotted to kill Jesus. This was not just a few men as before, but this time was the entire Sanhedrin as a powerful religious organization that decided to persecute & commit murder. Because of this Jesus was not able to walk openly any longer among the Jews. Days later He was detained, torture & crucified, right after He celebrated that Passover with His disciples. But none of this took Jesus by surprise, He already knew what they were planning to do to Him, still He lay His life because of His love for us.

Jesus’ public ministry began when John the Baptist pointed to Him as the ‘Lamb of God’, & now we have come to the end of His ministry with the resurrection of Lazarus. Almost half of the Gospel of John was dedicated to the last 2 days of Jesus’ life. The other evangelists, Matthew, Mark, and Luke, did so as well, and they placed greater emphasis on the last 8 days of His life. Therefore the gospels have as their central theme, the events of Jesus’ last days, and place their greatest emphasis on His death and resurrection.

There are 89 chapters in the entire four gospels & of these, only 4 chapters deal with the first 30 years of Jesus’ life. And the remaining 85 chapters cover the last 3 years of His life.