Gospel according to John, Chapter 7:  Read &/or listen from the Bible.

32 The Pharisees heard the crowd murmuring these things concerning Him, and the Pharisees and the chief priests sent officers to take Him. 33 Then Jesus said to them, “I shall be with you a little while longer, and then I go to Him who sent Me. 34 You will seek Me and not find Me, and where I am you cannot come.”

36 What is this thing that He said, ‘You will seek Me and not find Me, and where I am you cannot come’?”

They begin by addressing the question of the origin of Christ (Jn 7: 25-31), and later dealing with his destiny (Jn 7: 32-36). But if they didn’t believe what Jesus told them about were He was coming from, then it’s logical that they wouldn’t understand were He was going. Also they didn’t even ask Him were He was born (in Bethlehem not Galilee). The Lord did not deny his human origin, the gospel affirms: “And that Word was made flesh, and He dwelt among us” (Jn 1:14). but far more important than His human origin was His heavenly origin. Regarding this, their problem was fundamentally rooted in the fact that they did not know the One who had sent Him: “Then Jesus cried out, as He taught in the temple, saying, “You both know Me, and you know where I am from; and I have not come of Myself, but He who sent Me is true, whom you do not know. 29 But I know Him, for I am from Him, and He sent Me.” (Jn.7:28). 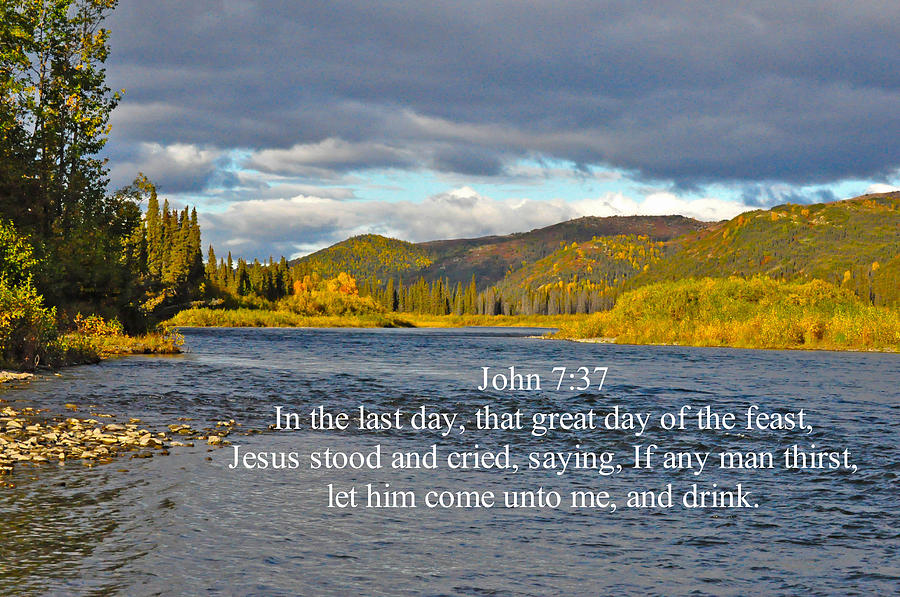 On the last and greatest day of the feast, Jesus stood and cried out, “If anyone is thirsty, let him come to Me and drink. 38 He who believes in Me, as the Scripture has said, out of his heart shall flow rivers of living water.” (heart) 39 By this He spoke of the Spirit, whom those who believe in Him would receive. For the Holy Spirit was not yet given, because Jesus was not yet glorified.

The water poured out in the ceremony of the last day of the feast of Tabernacle as a symbol of the future outpouring of the Holy Spirit, was used by Jesus to make an important statement: ” If anyone is thirsty Come to me and drink. He who believes in me, as the Scripture says, from within will flow rivers of living water” Jesus was speaking of the Holy Spirit that those who believe in Him would receive.

40 Therefore when they heard these words, many of the people said, “Truly, this is the Prophet.” 41 Others said, “This is the Christ.”

But some said, “Will the Christ come out of Galilee? 42 Has the Scripture not said that the Christ comes from the seed of David, out of the town of Bethlehem where David was?” 43 So there was a division among the people because of Him. 44 Some of them wanted to arrest Him, but no one laid hands on Him.

The people were divided over the person of Jesus:
His character (Jn 7:12). While some said that he was “good“, others thought that he was not and that he was deceiving the people.
His doctrine (Jn 7: 14-18). When Jesus taught the people he was amazed at his doctrine, because he spoke “as one who has authority” (Mark 1:22). Even the officers who went to arrest him when he was teaching in the temple, returned saying, “No man has ever spoken like this man!” (Jn 7:46). However, the Jewish leaders questioned his teaching because he had not studied in any of their rabbinical schools.
His motivation (Jn 7:18). The Jews not only thought that he promoted his own ideas, but that he did it to gain fame and honor for himself. But there was nothing in his words or attitudes that made him suspect such a thing, in fact, when he spoke, he always made clear that his purpose was to seek the glory of the Father who had sent Him.
His works (Jn 7: 19-24). The Lord had healed a paralytic on the Sabbath. This was interpreted by the Jews as a clear transgression of the law. They didn’t care about the miracle and didn’t appreciate that the man had been restored to his dignity and could once again enjoy the Sabbath as he had not done for years. But they disapproved what Jesus did under the excuse that it had been done on the Sabbath.
The origin of Him (Jn 7: 25-31). The Jews believed that the Messiah’s birth would be mysterious & supernatural. For that reason they ruled out that Jesus could be the Messiah, since they thought they knew where He was from. Moreover, they even accused him of having been born of fornication (Jn 8:41). They did not believe that he was virginally born to Mary. Faced with this, Jesus affirms over and over again that He had come from the Father. And as a man, he had been born in Bethlehem, just as the prophet had announced centuries ago (Mt 2: 4-6) (Mi 5: 2).
His destiny (Jn 7: 32-36). Jesus announced to them that He would still be with them for a little while and then return to the one that had sent Him. By this He meant His return to glory with the Father after finishing His Work in this world (Jn 17: 4-5). But once again the Jews did not understand what he was saying.

45 Then the officers came to the chief priests and Pharisees, who said to them, “Why have you not brought Him?” 46 The officers answered, “No man ever spoke like this Man!”

47 Then the Pharisees answered them, “Are you also deceived? 48 Have any of the rulers or the Pharisees believed in Him? 49 But this crowd that does not know the law is accursed.”

50 Nicodemus (he who came to Jesus by night, being one of them) said to them, 51 “Does our law judge a man before it hears him and knows what he is doing?”

52 They answered and said to him, “Are you also from Galilee? Search and look, for no prophet has arisen out of Galilee.” 53 And everyone went to his own house.

The reason they rejected Jesus as Messiah did not arise from a lack of evidence. No one questioned the authenticity of his miraculous works, or the authority of his teaching, or his blameless life. The problem lay in the fact that it didn’t conform to the mistaken expectations that the Jews had made regarding the coming of the Messiah & also to the jealousy of the religious leaders as they watched the popularity of Jesus grow among the people.