September 11, 2022 / cristolaverdad
This entry is part 5 of 6 in the series Revelation
Revelation

The 4 horses of the Book of Revelation correspond to the first 4 seals opened by our Lord Jesus. Then the 5th seal corresponds to the persecution of the saints that will be killed for the Word of God & for their testimony during this time:

9 When He opened the fifth seal, I saw under the altar the souls of those who had been slain for the word of God and for the testimony they had held. 10 They cried out with a loud voice, “How long, O Sovereign Lord, holy and true, until You judge and avenge our blood on those who dwell on the earth?” 11 Then a white robe was given to each of them, and they were told to rest a little longer, until the number of their fellow servants and brothers should be completed, who would be killed as they were.  Rev. 6:9-11.

The 6th seal corresponds to great & terrible terrestrial and celestial disturbances. There will be a ‘great earthquake‘, & because the sun becomes black & the moon red, many have said that this is a solar eclipse, etc.

12 I watched as He opened the sixth seal. And suddenly there was a great earthquake. The sun became black, like sackcloth made from goat hair, and the moon became like blood. 13 And the stars of heaven fell to the earth, as a fig tree drops its unripe figs when it is shaken by a strong wind. 14 Then the heavens receded like a scroll when it is rolled up, and every mountain and island was removed from its place.

15 Then the kings of the earth and the great men and the rich men and the commanding officers and the strong and everyone, slave and free, hid themselves in the caves and in the rocks of the mountains. 16 They said to the mountains and rocks, “Fall on us, and hide us from the face of Him who sits on the throne, and from the wrath of the Lamb, 17 for the great day of His wrath has come. Who is able to withstand it?” Rev.6:12-17

During a solar eclipse the moon moves directly in front of the sun, & the moon doesn’t look red,  but black, this happens for just a few minutes & this is something common that occurs at least twice every year. The shadow of the moon on earth is small, & only a very small part of the earth will have a shadow. Wikipedia says “Typically, the umbra is 100–160 km wide, while the penumbral diameter is in excess of 6400 km.” I really don’t think this is what the book of Revelation is talking about.  Also an eclipse of sun & an eclipse of moon can’t happen at the same time. 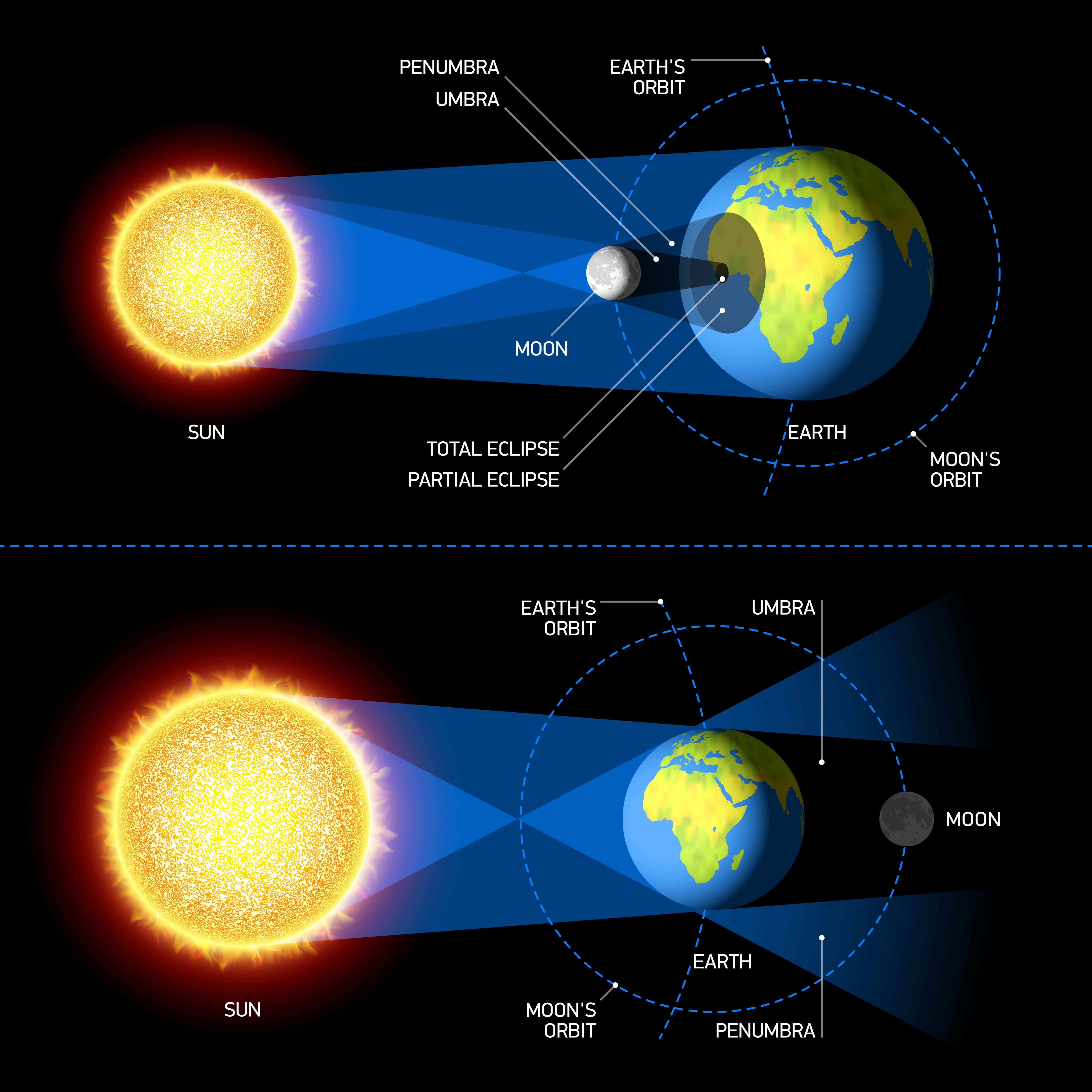 Top image is a solar eclipse & bottom a moon eclipse (or blood moon), so as we can see both can’t happen at the same time. But if something blocks the sun light the moon won’t be able to reflect it & it would look red.

There is a also a possibility, that the great earthquake, dark sun & red moon could be caused by nuclear wars, since the tall mushroom cloud & ashes could block out the sun light for few days & with no sunlight the moon won’t be able to reflect it Joel 2:30 & Acts 2:20 . But let us not forget, that in recent years some influential people have been  talking about solar geoengineering, or to do experiments to block the light of the sun, as a climate solution! See video.

There are some other accounts in the Bible where this darkness of the sun is mentioned & all seems to be the same event. Could you just imagine for a moment how the days would look like & the effects on earth (plants, animals, etc.), if there isn’t any light from the sun for several days?

See, the day of the Lord comes, cruel, both with wrath and fierce anger . . . For the stars of heaven and their constellations shall not give their light; the sun shall be dark when it rises, and the moon shall not cause her light to shine. Isaiah 13:10

30 Then I will work wonders in the heavens and the earth — blood and fire and columns of smoke.
31 The sun will be turned to darkness, and the moon to blood, before the great and awe-inspiring day of the Lord comes. Joel 2:30-31 & Acts 2:20

-In next paragraph the Lord Jesus is answering the apostle’s question about the signs of His coming & of the end of the age:

“4 Jesus answered them, “Take heed that no one deceives you. 5 For many will come in My name, saying, ‘I am the Christ,’ and will deceive many.

6 You will hear of wars and rumors of wars. See that you are not troubled. For all these things must happen, but the end is not yet. 7 For nation (G1484 = race, ethnic group) will rise against nation, and kingdom against kingdom. There will be famines, epidemics, and earthquakes in various places.

8 All these are the beginning of sorrows. 9 “Then they will hand you over to be persecuted (afflicted) and will kill you. And you will be hated by all nations for My name’s sake. 10 Then many will fall away, and betray one another, and hate one another. 11 And many false prophets will rise and will deceive many.   12 Because iniquity will abound, the love of many will grow cold. 13 But he who endures to the end shall be saved. 14 And this gospel of the kingdom will be preached throughout the world as a testimony to all nations, and then the end will come. 15 “So when you see the ‘abomination of desolation,’ spoken of by Daniel the prophet, standing in the holy place (let the reader understand), 16 then let those who are in Judea flee to the mountains.  . . .  21 For then will be great tribulation, such as has not happened since the beginning of the world until now, no, nor ever shall be.  . . .

29 “Immediately after the tribulation (G2347 = Affliction, persecution) of those days, ‘the sun will be darkened, and the moon will not give its light; the stars will fall from the sky, and the heavenly bodies will be shaken.’ Matthew 24.

So this ‘great tribulation’ will be unique & it wont be repeated. It seems like we just started this prophetic time that is called ‘the beginning of sorrows‘ (Wars, ethnic/civil wars, famines, epidemics & earthquakes in several places) in Matthew 24:6-8 & it coincides with the first 4 seals of the book of Revelation. There will be persecution vs.9 (5th seal) & before His wrath or before the coming for His Church, the great earthquake (I believe this could be a magnetic polar shift of the earth) & celestial disturbances as mentioned in the 6th seal.

The events (after the persecution) in reference to celestial phenomenon are 4 signs, they are mentioned one after another or close to each other, in the sun, moon, stars & heavenly bodies.

Because of some false teachers, the  people of the Church in Thessalonica thought that the ‘rapture’ or the day of Christ was at hand in their time 2 Thes.2 . But the apostle Paul explained things that needed to happen first. One of those sad things would be the great falling away & the other one is that the man of sin will be revealed, before Jesus’ coming & our gathering with Him (The rapture). But the Antichrist won’t have power when he is revealed, he won’t get it until after his head wound is healed miraculously, & then he will only reign for 3 & 1/2 years, when the Church is gone.

1 Now we beseech you, brethren, by the coming of our Lord Jesus Christ, and by our gathering together unto him,

2 That ye be not soon shaken in mind, or be troubled, neither by spirit, nor by word, nor by letter as from us, as that the day of Christ is at hand.

3 Let no man deceive you by any means: for that day shall not come, except there come a falling away first, and that man of sin be revealed, the son of perdition;  2 Thes. 2:3

Many will fall away, because they are not close enough to the Lord, they love the world but also because the enemy has prepared a BIG deception with signs & wonders to deceive all the earth & if possible even the elect (Mat.24:24).  So please, make you decision today, to follow Him according to what He taught us in the Scriptures during the difficult times ahead. We must trust the Lord with all our hearts especially in the coming days of darkness & deception, He is our LIGHT! (Jn.8:12, Eph.4:14, etc).

The enemy’s new strategy, is to pretend some of his big pawns are falling (dying/resigning, etc). Some of the people that worships the enemy have been sending signs of their plans to their adepts, & for that reason many already knew about the queen, also next in the plan will be the pope, JB, & others, changes to the UN, etc. but it’s just a changing of the guards. It seems to me (I could be wrong) that they may do a partial uncovering of the false pandemic, & fake the punishment of some of their puppets, in order to deceive & gain the trust of the people that are aware of their lies, that are resisting & warning others, but please don’t let your guard down, don’t let them deceive you!  Are they looking to catch people distracted, & disoriented to then present to all the next BIG deception (Holograms UFOs?). Also in Christian churches many false prophets speak in God’s name, they are not telling the future, but letting you know an already prepared agenda that their masters are looking to execute. Many Christians are easily deceive because they don’t try the spirits (1 John 4:1).

Go to the Lord in prayer & He will show you the truth. Don’t forget our Lord Jesus is our Mighty king, He is Lord of lords & King of kings, if we are God’s people we don’t imitate the unbelievers, don’t make the same mistake the Israelites did when they were looking for an earthly king to solve their problems (1 Samuel 8), do not trust men, (Jer.17:5). Their offers of ‘Peace & Security’ are lies. Seek God, ask Him for wisdom and it shall be given to you (James 1:5-6).

27 But the anointing which you have received from Him remains in you, and you do not need anyone to teach you. For as the same anointing teaches you concerning all things, and is truth, and is no lie, and just as it has taught you, remain in Him. 1 Jn. 2:27

Our Lord Jesus gave us these specific signs in Revelation so we could know the time or season of His return, so we could be ready!