The 4 Horses of Revelation

February 1, 2022 / cristolaverdad
This entry is part 2 of 7 in the series Revelation
Revelation

The main character of the entire book of Revelation is the Lord Jesus Christ, in chapters 2 and 3 we saw the risen Lord from heaven addressing the churches on Earth. Now after chapter 4 the scenario changes completely, placing the readers in Heaven. The Apostle John sees a door open in heaven & a voice calls him “Come up here, and I will show you things which must take place after this.” He then sees a throne in heaven & heavenly worship.

In Chapter 5, Jesus, the Lamb of God, is the only one found worthy to break 7 seals of the scroll, He came and took the scroll out of the right hand of Him who sat on the throne. (some translations say ‘book’, but compare the Greek word scroll G975 w/ same word in Rev.6:14).

This post is regarding chapter 6 & the possible timing for the opening of the seals, more specific about the 4 horses of the Book of Revelation. When the seals are open, the 4 horses begin to ride. I think knowing the time is important because it may help some people to see how close we are to the Lord’s coming, some will look for Him & get saved, and it may also help many believers to put their houses in order & get ready for His coming. I saw when the Lamb opened one of the seals. Then I heard one of the four living creatures saying, with voice like thunder, “Come and see.” 2 And I looked, and there before me was a white horse. He who sat on it had a bow. And a crown (corona) was given to him, and he went forth conquering that he might overcome.

3 When He opened the second seal, I heard the second living creature say, “Come and see.” 4 Then another horse that was red went forth. Power was given to him who sat on it to take peace from the earth, causing people to kill one another. Then a great sword was given to him.

7 When He opened the fourth seal, I heard the voice of the fourth living creature say, “Come!” 8 So I looked, and there was a pale horse, and the name of him who sat on it was Death, and Hades followed him. Power over a fourth of the earth was given to them, to kill with sword, with hunger, with death, and by the beasts of the earth.  Revelation 6:1-8

There are some differences in the interpretation including the timing since the Bible doesn’t mention a date. But we have no doubt that what the prophecy of this book says will come to pass, & it is clear what each horse represent, most agree they are Conquest, War, Famine/hunger, and Death. Verse 8 also says that they together have the power to kill w/ war, hunger, death & by the beast of the earth,  1/4 of earth population. These 4 horses are ‘judgments‘ see also Ezek 14:21, Jer.14:12, 2 Chron.20:9. “for when Your judgments are in the earth, the inhabitants of the world learn righteousness.” Is. 26:9.

I always heard that these 4 horses would ride at the beginning of the great tribulation period, & the Church wouldn’t be here to see them. So I didn’t worried to much about it & because of it I was not in a hurry about studying the Book of Revelation since we wouldn’t be here for that time. Studying the Scriptures I understood that the Church wouldn’t be here (or it would be protected, Rev. 3:10) from the wrath of God, (John 3:36, 1 Thess. 5:9). The wrath of God is only for those who do not follow Jesus the Son of God as their Savior. “Let no one deceive you with vain words, for by these things comes the wrath of God upon the children of disobedience” (Eph. 5:6, see also Eph. 2:1-3), wrath is not for the ones that have received Jesus Christ & obey His Word.

Have the 4 horses began to ride? I think there is a very good possibility that not long ago (2 yrs) we started the timing of the white horse or the 1st seal of Revelation. Time will tell, but just let us be prepared, we got nothing to loose by doing that.

WHITE horse- Notice the emphasis is given to the horses & their colors, not the riders, the riders only help us to understand more about what the horses represent. The color white in the world has always represented PEACE (a white dove, white flag, etc). I don’t think is a coincidence that an emblem of the United Nations (published in May 1991, Vol.6, No.5; pg.14, from the newspaper “The Omega Letter”) was a white horse, the heading stated: “The white horse, like a messenger of Peace“. The article said that the dove, symbol of peace between nations had competition now, this horse represented also freedom and global unity; on the horse’s head was the emblem of the United Nations & 5 ribbons of different colors representing 5 continents.

(Note: This brings to mind a character of the Greek & Roman mythology -already known at the time of the apostles, Artemis/Diana Acts 19:34, was his twin sister-, the  god of archery, plague, medicine, music, poetry, art, oracles, sun, light & knowledge: Apollo (in Greek means the Destroyer). During the Trojan war, Apollo sided with Trojans & shot arrows infected with plague into the Greek encampment, spreading the disease among them. Please check this, coincidence? Check also here). 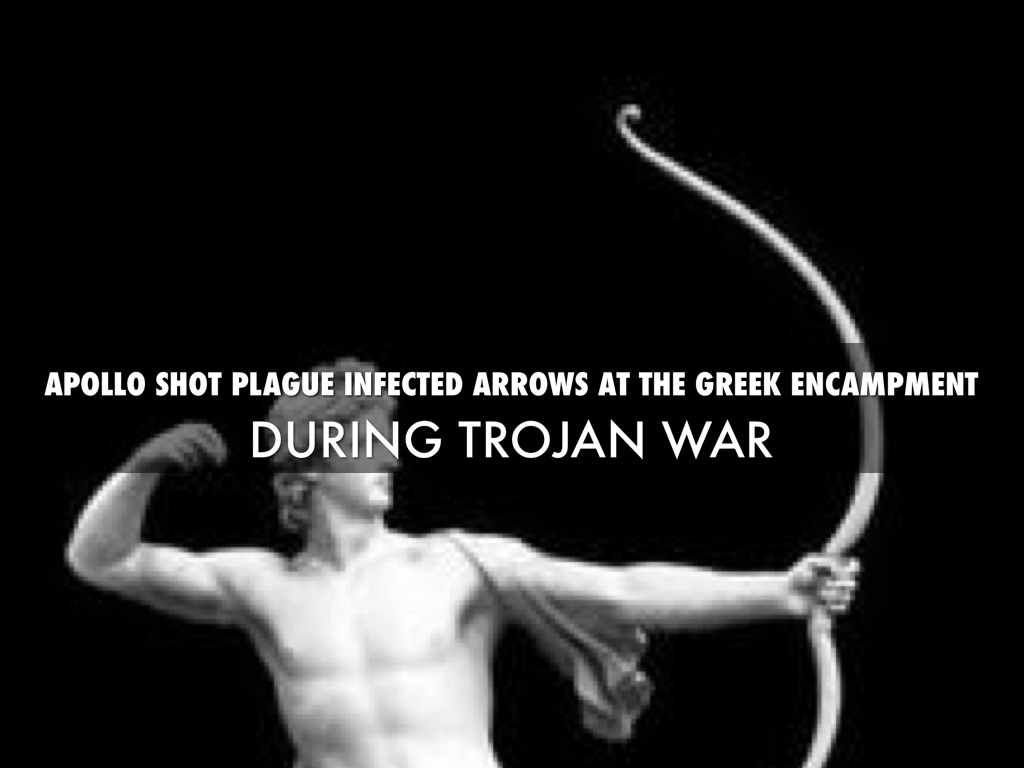 This rider represents a hunter, we Christians are compared with fishermen (Matt.4:19) but hunting skills use more force or violence to catch their prey, also these skills were mainly used in the Bible by people that were rebellious against God.

‘Surely He shall deliver you from the snare of the hunter and from the deadly pestilence’. Psalm 91:3

For this & other reasons we don’t believe the rider of the white horse represents Jesus, but we think it has to do with the antichrist & his system.  The rider has also a ‘crown‘ G4735 (corona) which means ‘exalted rank’ a ruler or the victory garland given in public games as reward (This rider has a single crown or stephanos, but Jesus is crowned with many crowns, Rev.19:12 & all of His crowns are diadems (G1238), the mark or badge of royalty, and figuratively, empire; supreme power). The rider is a hunter (with poisonous hunting tools?), advancing under the guise of peace but he intends to conquer or subdue the world & victory was given to him.

I believe this white horse has to do with the Peace Treaty of the Middle East, which the antichrist will later confirm (Daniel 9:27 & 11:3-32). When says ‘confirm’ means it was already made or signed before hand, but it will be ratify or made stronger, & this time for 7 years (& may include stipulations for the construction of the temple, which will eventually cause the abomination of desolation, Matt.24:15).

A historical event, a peace agreement” was already presented in January 2020 & later signed during the pandemic, on September 15, 2020 called also a “Dawn of a new Middle East” (Is.14:12), see details w/maps. But it’s not over yet, because more countries will enter to be part of it, until it will be confirmed for 7 years. Also notice that since that ‘peace treaty’ was presented, coincidentally we started the pandemic of a ‘corona‘ virus, which is being used to subdue or control the entire world, nothing like this has ever been seen before, but also the technology used in the poisonous shots to subdue the people globally, is a nano-technology network called ‘Corona‘, see more details here.

According to 1 Thessalonians 5:3 words of peace & security (<- pls see link) should be heard at the end times before the coming of the Lord (1 Thess.4:13-18) & before the coming destruction, that will intensify like the contractions of a woman giving birth. If you go to that link you will see we are hearing them more loudly now.

“For when they shall say, Peace and safety (G803=security); then sudden destruction cometh upon them, as travail upon a woman with child; and they shall not escape.” 1 Thess. 5:3

If the white horse didn’t start riding when that initial peace treaty was presented or signed in 2020 (which I’m more inclined to believe), then it may do so when that peace treaty is confirmed for 7 years. But if we are right about the timing of the white horse of Revelation, then we will see the calamities of the other 3 horses soon after, & next would be war.  Also in vs 4 we read there is relative peace before the red horse rides : “4 Then another horse that was red went forth. Power was given to him who sat on it to take peace from the earth, causing people to kill one another. Then a great sword was given to him.”

Remember that during the riding of all the 4 horses (time during white horse included) 1/4 of the earth or  a lot of people will die around the world, so be spiritually & mentally prepared, as close as possible to our Lord, because we (the Church) may be here to see the seals open. God told us about it long ago, so we could be prepared, put your lives & of your love ones in His hands. Pray for the Church, sadly many believers will go more deeply into apostasy (2 Thess.2:3), but also pray for the souls that will be saved during these difficult times. I also believe the Lord will empower His true followers to bring a big harvest before His wrath.

The other 3 horses interpretation are very clear:

PALE horse- Death, this is the only rider that was given a name, but it’s not a person. Is a figure of speech, in which a thing or an idea is given human qualities.  I believe that all 4 horses represent events & not persons. Same with the rest of the seals, they all are EVENTS before God’s wrath, and we believers may go through them.