August 9, 2022 / cristolaverdad
This entry is part 7 of 7 in the series Revelation
Revelation

Something very disturbing happened recently in England. They are more blatant with time, nonetheless I’m glad that there is more people noticing these presentations aren’t normal but are full of darkness & hidden meanings.

Thus they changed the glory of God  for the image of an ox that eats grass. Psalms 106:20 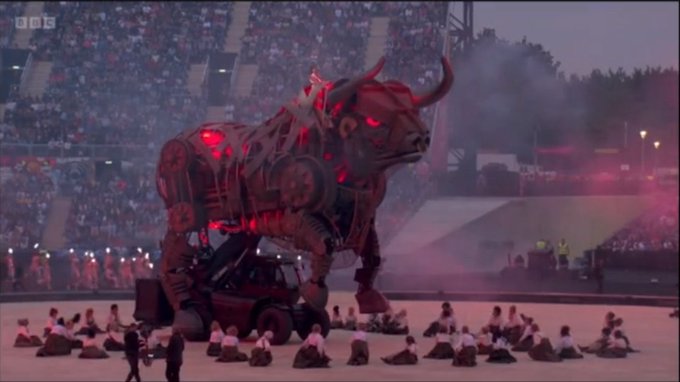 The bull  in the Opening Ceremony of the 22th Common Wealth games in Birmingham was the star attraction, the games were held in second-largest city in the United Kingdom, from July 28th-August 8th, 11 days, & dates coincide with the Helical rising of the star Sirius, (1). A total of 72 nations participated in the Commonwealth Games, and so this opening ceremony was viewed by millions around the world.

The first thing they show at the opening ceremony is different regions of the world, then the space & planet Saturn, (min.1:36) aka ‘the Lord of the rings’, the 6th planet, Saturday is the day of Saturn, which symbol is a 6-pointed star. But also we notice some stars falling , it seems they come from Saturn’s region & fall unto the earth in different countries, near the houses of a group of young people.

You also took up the tabernacle of Moloch, And the star of your god Remphan, Images which you made to worship; And I will carry you away beyond Babylon. Acts 7:43, Amos 5:26

Later on 50 women pulled with chains a giant bull onto the stage at the Alexander Stadium. They say 50 people spent 5 months building the mechanical bull that was 10 meters high (about 33 ft) & it had been given the nickname “Raging Bull”. Its creator said he wanted to be revealed as a creature of LIGHT!? (also the narrators said that). The bull got loose & escaped, one of the narrators said it caused ‘Pandemonium‘. They really love that word, I remember them using it at the Olympic games of London in 2012. ‘Pandemonium, noun (archaic) A place where all demons live; Hell. Chaos; tumultuous or lawless violence. The great hall or council chamber of demons or evil spirits.

[The word comes from Greek pan– “all” (see pan-) +  Greek daimonion G1140 “evil spirit/demon”.  The words panic, pandemic & pandemonium come from same roots.  But also there is a god called Pan. Manly P. Hall, a 33rd degree Mason, in his book “The Secret Teachings of all ages” says the god Pan is “a symbol of Saturn because this planet is enthroned in Capricorn, whose emblem is a goat“. – Pan is also known as the androgynous Goat of Mendes or Baphomet].

The names of the 21 victims killed in Birmingham, in the 1974 Mulberry Bush and Tavern in the Town bombings by the Irish Republican Army were inscribed on the forehead (a headpiece) of the bull, among other unrelated phrases like ‘Chronic hunger can bind tighter than any iron link‘. The organizers failed to inform the families of the victims about it.

Stella (her name means star or Ishtar), the girl with a purple lion on her shirt, was the hero of the Opening Ceremony, accompanied by 5 close friends, she calms the bull down with one of the star’s fragments that fell from heaven, that previously she whispered her hopes & dreams or prayed to it. These group of people with the supernatural luminous star fragments (the light bearers) were called ‘dreamers’. Then  the rest of the performers gathered around the giant bull, the woman appears on top of the bull & people began to bow down and worshiped the BEAST. (Rev. 13:4). See picture & here.

– In the opening education activist & youngest Nobel Peace Prize laureate Malala Yousafzai says ‘welcome to Babylon! (1). We also find in the stage a growing tower. A woman narrator even says the ‘Tower of Babel‘ (min.3:44) when the drummer was on top of the tower. Also a theme repeated several times was ‘All be one‘ & ‘Together/United’. Which bring us to mind:

And the whole earth was of one language, and of one speech. . . 4 And they said, Go to, let us build us a city and a tower, whose top may reach unto heaven; and let us make us a name, lest we be scattered abroad upon the face of the whole earth. .  . 5 And the Lord came down to see the city and the tower, which the children of men builded. 6 And the Lord said, Behold, the people is one, and they have all one language; and this they begin to do: and now nothing will be restrained from them, which they have imagined to do. Genesis 11

There were bull cults in Babylon, Marduk, the primary Babylonian god, can be translated to “bull of Utu”. Marduk was later known as Bel, a name derived from the Semitic word baal, or “lord.” The Tower of Babel has been popularly associated with the ziggurat of the great temple of Marduk in Babylon.

Reconstruction of the Etemenanki. -Wikipedia

“Etemenanki (Sumerian: “temple of the foundation of heaven and earth”) was the name of a ziggurat dedicated to Marduk in the city of Babylon. It was famously rebuilt by the 6th-century BCE Neo-Babylonian dynasty rulers Nabopolassar and Nebuchadnezzar II, but had fallen into disrepair by the time of Alexander‘s conquests. He managed to move the tiles of the tower to another location, but his death stopped the reconstruction, and it was demolished during the reign of his successor Antiochus Soter.” Wikipedia

Interesting to know that Alexander the Great tried to reconstruct this temple of Marduk/Baal but the reconstruction stopped with his death, and now we have an allegoric reconstruction of same temple in a ceremony at the Alexander Stadium, with 72 nations of the world represented there.

In Rome & ancient Greece, the bull was a powerful symbol. For instance, ZEUS, the chief deity of ancient Greeks (or his Roman equivalent JUPITER) was often personified in the form of a bull. According to mythological tales, Zeus would trans-mutate into a bull, & abduct young human females to rape them (as in the abduction of Europa. The continent of Europe is named after her).

In ancient Egyptian religion, Apis was a sacred god bull & it was linked with Osiris, as the incarnation of Osiris or becoming Osiris-Apis, historians describe the creation and the establishment of his cult center at Alexandria, historian Plutarch described the Apis god bull as the “fair and beautiful image of the soul of Osiris”. So even today we have secret societies that worship Osiris, & that are involved in bull worshiping. 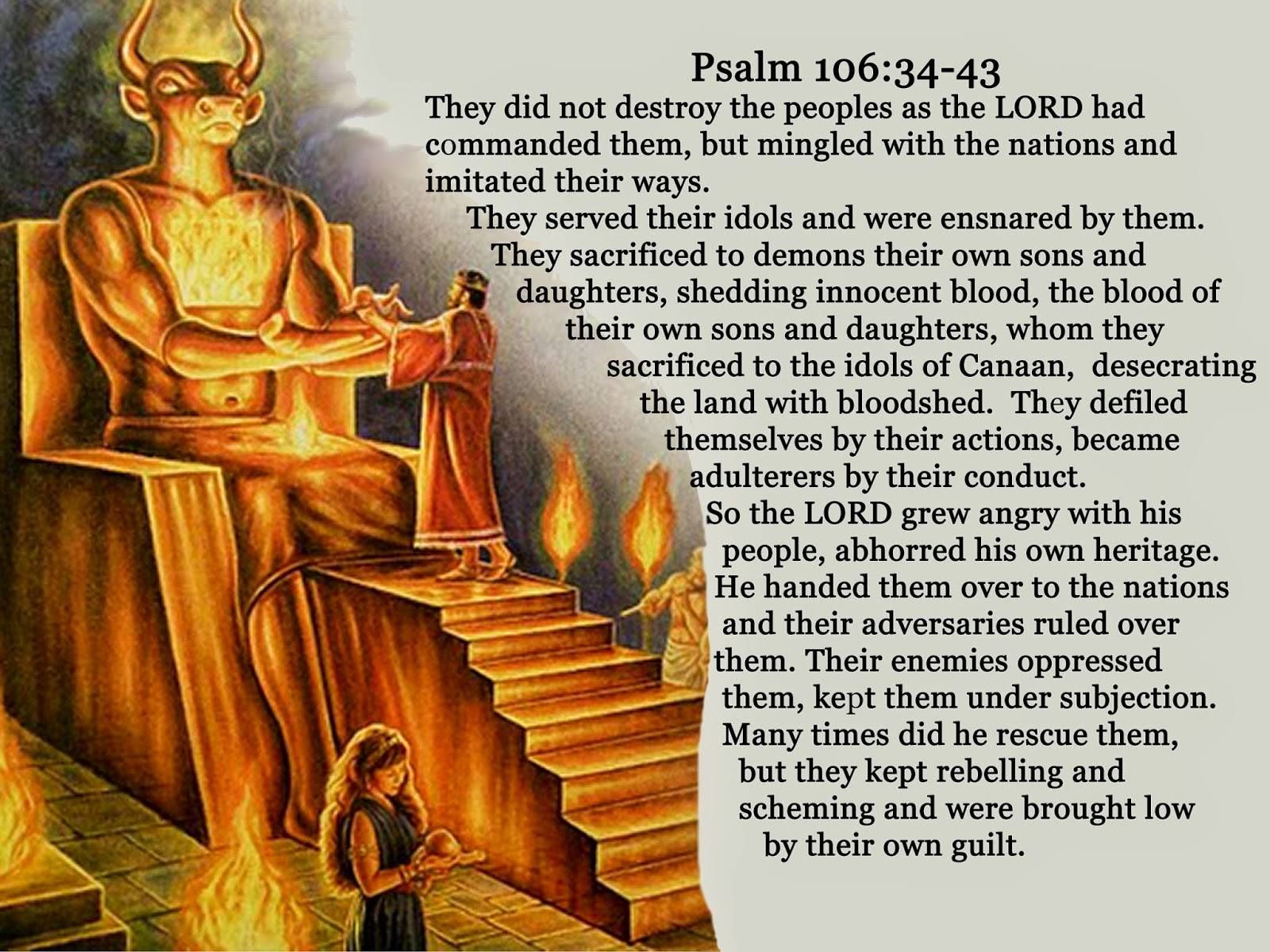 In ancient Israel the Canaanite and Phoenician god Baal also known as Molech or Moloch was personified as a Bull. And it calls my attention that this bull in the ceremony has red light or fire inside just as Baal did. Bulls are naturally aggressive animals & this is called a Raging bull. So there is no doubt that the red colored ‘beast’ with a woman riding it, represents pure evil. And I think this is the main thing they were trying to portrait in the ceremony:

3 So he carried me away in the spirit into the wilderness: and I saw a woman sit upon a scarlet coloured beast, full of names of blasphemy, having seven heads and ten horns. 4 And the woman was arrayed in purple and scarlet colour, and decked with gold and precious stones and pearls, having a golden cup in her hand full of abominations and filthiness of her fornication: 5 and upon her forehead was a name written, MYSTERY, BABYLON THE GREAT, THE MOTHER OF HARLOTS AND ABOMINATIONS OF THE EARTH. 6 And I saw the woman drunken with the blood of the saints, and with the blood of the martyrs of Jesus: and when I saw her, I wondered with great admiration. Rev. 17:3-6

The woman in the ceremony had a light or star fragment in her hand. The woman of Rev. as it did in the past, (but I believe this time using the technology of the new system (AI) of the Beast/Antichrist, & their demons/aliens, which could be the ones CERN is summoning ), will persecute & kill some saints, vs.6.

But why the color red or scarlet? what it means? scarlet & red in the Bible has several meanings (Rev. 6:4, etc.) but it also represents  sins:

In the ancient world the color purple was a mark of high rank and nobility.

-The star attraction for the closing ceremony on the night of the 8/8/2022 was Ozzy Osborn aka Prince of Darkness. (Opening- icon of light/Closing- icon of darkness?).

These ritualistic ceremonies are preparing the world to accept the soon to be revealed Beast or Antichrist, but with the raging bull they also announce the coming persecution of all the people that go against their plans & agendas. Let us not forget that God knows everything, He told us in advance & He still has good plans for His children before He caught us up.

Yes, some believers will die (Rev.6:11), they will have no more pain (Rev.21:3-4) & will be very happy in heaven with our Precious Lord Jesus, but remember that this time, very shortly after they depart, we’ll encounter them in the day of the rapture. Please let us consider that this world system that we live in is almost over, & we won’t like the new one that’s is replacing it (represented by the ‘Tower of Babel’ that burned down but is repaired back by the 6 dreamers with their 6 lights, making  a 6 point star).

Meanwhile most of us still have things to do for the Lord. He has been equipping us & will direct us on what to do . We believers aren’t afraid of death, because we now live for Him “For none of us lives for himself, and no one dies for himself. 8 For if we live, we live for the Lord. And if we die, we die for the Lord. So, whether we live or die, we are the Lord’s“. Rom 14:7-8. “Now when these things begin to happen, look up and lift up your heads, because your redemption draws near.” Check what things: Luke 21-25-28. Get ready beloved, our Lord is coming very, very soon!! Come Lord Jesus!!!

Therefore rejoice, ye heavens, and ye that dwell in them. Woe to the inhabiters of the earth and of the sea! for the devil is come down unto you, having great wrath, because he knoweth that he hath but a short time. Rev. 12:12

Many bulls encircle me; strong bulls of Bashan surround me.
13 They open their mouths against me, as a preying and roaring lion. Psalm 22

The ‘Star of Remphan” & Saturn Worship

The worship of Saturn

The World Together –Pandemic Treaty, tied to a digital passport and digital ID system