July 22, 2020 / cristolaverdad / Comments Off on The Bible Project & Mysticism

About a year ago a relative showed me a couple of videos made by the Bible Project, they are short animated videos teaching the Bible and I really loved their animations, & the high quality of their presentation. After watching a few more videos, I found that the most important part, their bible teachings, have a lot of interpretation or personal opinions, not everything was biblical base. Later in another video I found they didn’t believe in hell, even this is a basic doctrine accepted by all Christians, which is denied only by sects like Jehovah Witnesses & others like them. So even a lot of ministries were using their videos as tools to teach the Bible, I stopped watching them, because after my personal experience of coming out from a system full of wrong doctrines (Catholicism), I value sound doctrine more than anything else.

Recently, I was asked about my opinion about the Bible Project’s videos on the book of Revelation. I checked them & I couldn’t believe they are still so popular in Christian circles, because these videos even they are beautifully made, they don’t sound biblical at all, they completely changed the entire book of Revelation! So I decided to do some search about the spiritual beliefs of the founders.

Because I know some (specially the younger followers of Bible Project) may get offended, let me tell you that my true intention is to always show the truth even if it make us sad. It’s better to be sad for a few minutes than to be sad eternally. Bible Project is a public study (not private lessons) and is affecting the life of thousands of Christians, then I can publicly give my personal opinion for the sake of those people & also the ones who asked me. Please understand in doing this, I’m not shooting at the messenger, I just disagree with their many errors in their message/doctrine, since they say ‘their videos explore the books and themes of the Bible‘, but when you compare them with the Bible in reality you will find a lot of serious doctrinal contradictions. I just pray for them & ask you to please do the same.

I will let the review of their 2 videos about the book of Revelation for latter, since it will take more space & time.

These are just some of the many red flags I found:

-1 / Tim Mackie & Jon Collins are co-founders of the Bible Project, they reject the biblical understandings of the Atonement (propitiation), the normally accepted teachings of the rapture, judgment,  hell, etc. Tim Mackie said (<=pls see link) that “modern Christianity has done piecemealed bits and words and images out of the Bible and made up a new narrative“, but I think that’s exactly what they are doing.

-2 / When you go to Tim Mackie’s personal page, you will find a list of people that were spiritual influences on him & he recommends their writings, but if you research you will find that several of them teach mysticism, including a rabbi (Abraham Heschel) & a Jewish professor (Fishbane) since both are teachers of kabbalah or Jewish mysticism. Kabbalah is mystical enlightenment through meditation & contemplation.

-3/  Another issue with Tim Mackie’s doctrine, is that he is teaching Lectio Divina in his church.  This is a form of contemplative prayer & Catholic mysticism. Just hearing Mackei speak it shows that he is very involved in mysticism, but these shouldn’t be a surprise when we know about his spiritual influences. Also is important to note that Catholic Mysticism comes from Kabbalah.

-The Enneagram as practiced today started in 19th century with George Gurdjieff -1866-1949 (secular site so skeptics don’t say this are ‘religious’ Christian’s invention) an Eastern Orthodox that turned into esoteric teachings & got involved with several religions, including the Sufis (Islamic Mysticism). To Gurdjieff & to the Sufi mystics who he was involved with, the enneagram was primarily about numerological divination. 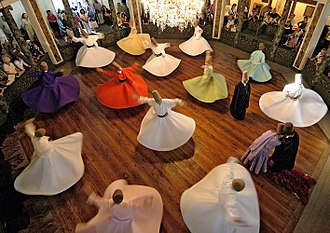 ‘Sufi whirling’ a sacred dance or a form of physically active meditation practiced among mystics of the Sufi sect.

According to his principles and instructions, Gurdjieff’s method for awakening one’s consciousness, supposedly unites the 3 methods, of the fakir (body), monk (emotions) and yogi (mind), and for this reason he referred to it as the “Fourth Way“. Gurdjieff tells in his writings that the earliest indications of the teaching of The Fourth Way lie in prehistoric Egypt. One of the principal symbols of The Fourth Way is the enneagram. He wrote a complex book (10 books in 3 series) called “Beelzebub’s Tales to His Grandson“. Beelzebub means “the lord of flies,” is the name given to Satan & the Canaanite deity Baal, his name is  found in the Old Testament 2 Kings 1:2-3, 6, 16 & in the New Testament ( Matt. 10:25 ;  12:24 & 27 ; & Mark 3:22 ), he was worshiped as a god. Beelzebub is believed to be responsible for many cases of demonic possession in the 16th & 17th centuries. Why would any true Christian look to have any connection with this occultic practices of Gurdjieff?

The Enneagram has become the symbol of Gurdjieff. Some promoters say the mystic Sufis call it “the face of God.” or ‘nine faces of god‘ But what god are they talking about? (See 2 Cor.4:4)

Enneagram is practiced by new agers, witches, gnostics, kabbalists, etc. & now sadly this new trend have been embraced by a growing number of evangelicals. It was first introduced into the Christian church by followers of Roman Catholic priest, mystic and” contemplative, “Father Richard Rohr” (who was a disciple of Jesuit priest Robert Ochs, who is credited with bringing the Enneagram to Catholics in the USA). Is good to note that many Catholics reject the enneagram.

At the very epicenter of today’s Enneagram movement is Franciscan priest Father Richard Rohr, founder of the Center for Action and Contemplation (CAC). Rohr’s website states:

Seven of the nine Enneagram types are associated with the “capital” or “deadly” sins which originated with the Desert Fathers. But it was not until the late 1960s that Oscar Ichazo began teaching the Enneagram as we know it today. From Ichazo’s school in South America, a group of Jesuits learned the system and brought it back with them to the United States. Richard Rohr learned about the Enneagram from this group and was one of the first people to publish a book about it in English.

The Enneagram gained popularity as a tool within spiritual direction.* Today it is widely taught as a way of understanding personality, addiction, relationships, and vocation.

After Rohr learned about the Enneagram in the 1970s, he shared his Enneagram teaching on ten tapes, later writing his now classic best-selling book, ‘Discovering the Enneagram: An Ancient Tool for a New Spiritual Journey’ (now titled The Enneagram: A Christian Perspective). – New Booklet: The Enneagram—An Enlightening Tool or an Enticing Deception?

Among that group of Jesuits that learned from Ichazo was Rober (Bob) Ochs. Ichazo, a Sufi-inspired mystic, claims to have had out-of-body experiences since childhood. He further claimed that he had received instructions from a highly evolved spirit being called ‘Metatron’ (an archangel or demon mentioned in Gnostic & Kabbalah literature) & that this revelation was crucial to the Enneagram project.

Some say the enneagram has Christian origins & started with Ramon Llull (1232-1315) because he taught a philosophy and theology of nine principles in an attempt to integrate different faith traditions. Even there is no evidence of him teaching the Enneagram. But if they want to say it came from R. Llull it is still not a good origin, since he was a Catholic Franciscan mystic who had a series of visions, wrote treatises on alchemy (occultism) & used kabbalah as a supposedly tool of conversion for Jews, which reinterpreted Kabbalistic doctrine to a Christian perspective.

Most proponents of the Enneagram are clear this is not a personality profile (9-personality type model of the human soul and their inter-connectedness as that started with mystic Claudio Naranjo, via automatic writing), but 9 individual paths back to your “True self,” the self that supposedly we actually are, which never sinned and that is with God already & was never separated from God. All these are opposed to the basic doctrines of the Christian Faith.

When popular teachers like Tim & Jon embrace the Enneagram, many of their followers (most of them babies in the Lord) unfortunately will accept this practice & false teaching as valid. But if we open ourselves to such occultic practices no matter how harmless they may seem to us, it may open us up (& our children also) to demonic infestation.

Always seek to learn from people who are well anchored in the Word of God, not people that you already know have doctrinal errors, such as not believing in basic doctrines like salvation, bodily resurrection, hell, etc. We already know that the majority of those who do not believe in hell &/or bodily resurrection are sects. We also know that a basic doctrinal error can have a big effect on other doctrines. To go against the bible interpretations that are clear & accepted by all Christians, is because a rejection of some bible verses occurred first & that distortion will affect other doctrines as well, like a domino effect.