September 1, 2020 / cristolaverdad
This entry is part 5 of 9 in the series Mysticism
Mysticism

Your word I have hidden in my heart, That I might not sin against You. Psalm 119:11

When you check the doctrine of Catholic mystics you realize they didn’t understand the gospel according to the Bible (salvation by faith in Jesus  sacrifice, not by works, Eph.2:8-9). But they believed their works & sacrifices were needed to ‘ascend‘ & get closer to God. Jesus Christ was not their mediator, but different ‘saints’ that they called patrons or advocates. Most of their doctrines (& even their visions) came from the traditions of the Catholic Church, not the Bible.

Catholics believe in the cleansing fires of purgatory (from Apocrypha book of 2 Maccabees 12 & misinterpretation of 1 Cor.3:15 & 1 Pet 1:7) & believe sin has a double consequence (CCC #1472), which are non-Biblical concepts, but interpretations according to their traditions. In other words they believe Jesus’ sacrifice was NOT sufficient to clean us from sin!

“The Catholic Church holds that “all who die in God’s grace and friendship but still imperfectly purified” undergo the process of purification which the Church calls purgatory, “so as to achieve the holiness necessary to enter the joy of heaven”. -Wikipedia.

Sadly all these Catholic mystics were trying to get purified (by punishing their sinful attachment to the world with prayer, meditation, suffering, physical punishment, etc.) while on earth, in order to be holy & enter heaven without passing through purgatory. They believed that pain and suffering played a crucial role in salvation. Most mystics had the following characteristics (for modern mystics disregard 3 & 4):

Teresa of Avila (28 March 1515 – 4 October 1582) was a Catholic mystic born in Spain from a family with Jewish roots. Her real name was Teresa Sánchez de Cepeda y Ahumada (a.k.a. Teresa de Jesus). Her grandfather Juan Sánchez de Toledo (1440-1507- born in Toledo Spain) was a converso, who was condemned by the Spanish Inquisition for returning to his Jewish faith, he received reconciliation in 1485 which helped him to preserve his economic and social status, & was condemned to wear in procession for six weeks the sanbenito, a yellow garment of those condemned by the Inquisition. In order to clean his lineage he purchased a certificate of limpieza de sangre [cleansed blood] and moved to Avila were was able to assume a Catholic identity.

When Teresa’s mother die, she (a teenager) embraced a deeper devotion to the Virgin Mary as her spiritual mother. Teresa was influenced by reading books of mystics, among them Francisco de Osuna & his book The Third Spiritual Alphabet (he was a follower of Catholic mystic Francis of Assisi,  first stigmatic recorded, that did penances like long vigils, fasts, frequent flagellation, etc.) & also by the mystical ascetic works of St Peter of Alcantara another follower of Francis of Assisi, who was often seen in ecstasies and levitation, & who became her first counselor.

After starting her life in the monastery of the Incarnation in 1536, she got sick & was paralyzed for almost 3 years, at this time, she claimed to have experience ecstasy and to have created a perfect union with God. But she believed this & many other illnesses she had, were given by God, she had a lot of guilt of her past & present sins. Her father took her home but after she was healed she went back to the Monastery. She claimed she was healed by ‘glorious St. Joseph’ (husband of Mary) who she chose as her ‘patron & lord’, he was her mediator & advocate– Autobiography, Chap.6 p.51. She reformed the Carmelita Order to make it more strict, limited the nuns to 13 per house, maximum 21 if not enough alms, instituted the great/grate veil, wearing of sandals ‘Discalced’ & founded other monasteries for men with the help of John of the Cross (also a  converso). 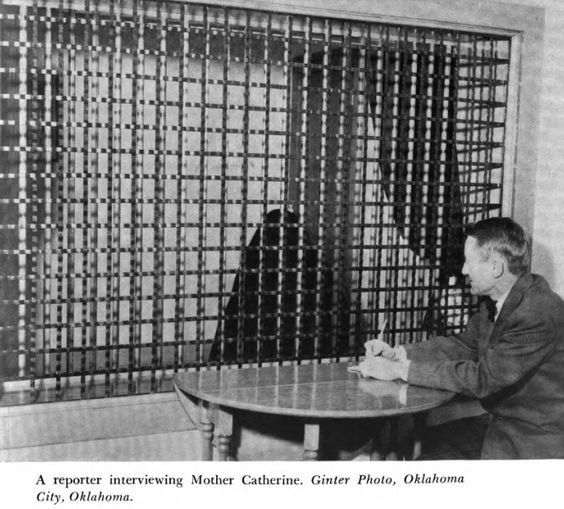 Carmelite nuns for hundreds of years lived secluded & wore a veil when had a visitor. 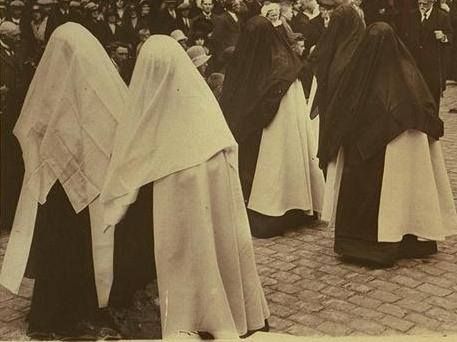 “From long experience I have learned that there is nothing like holy water to put devils to flight and prevent them from coming back again. They also flee from the Cross, but return; so holy water must have great virtue.” – St. Teresa of Avila. 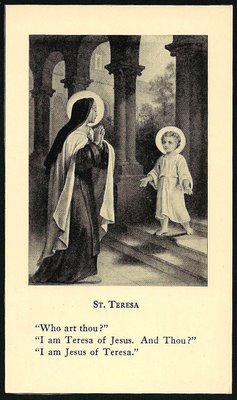 Teresa of Avila had many apparitions of infant Jesus.

Teresa spent long periods of time in meditation, which she called the “prayer of quiet” & the “prayer of union.” During these prayers she often fell into a trance. She was closely watched suspected of heresy & was investigated for several years by her superiors who requested her to write about her experiences. The Jesuits started to visit her in 1555. In 1557 her confessor, Jesuit General Francis of Borgia (also of Jewish roots), approves of the spirit of the mystic. He reassured her of the divine origin and inspiration of her thoughts. No long after that visit, she gets her first involuntary levitation & a vision of Hell.

She had numerous visions of the souls in Purgatory, apparitions of infant Jesus, later, of her deceased friend Peter of Alcantara, etc. In 1559 she was having encounters with an angel (she said a seraphim) that pierced her heart, causing her pain & ecstasy. (Saint Francis of Assisi had also said he encountered a seraphim, who gave him the stigmata wounds, no cases of stigmata occurred before him). Isaiah 6 is the only place in the Bible that specifically mentions the name seraphim. But they have six wings, also mentioned in Rev.4:8, about the living creatures.

“It pleased our Lord that I should see the following vision a number of times. I saw an angel near me, on the left side, in bodily form. This I am not wont to see, save very rarely…. In this vision it pleased the Lord that I should see it thus. He was not tall, but short, marvelously beautiful, with a face which shone as though he were one of the highest of the angels, who seem to be all of fire: they must be those whom we call Seraphim…. I saw in his hands a long golden spear, and at the point of the iron there seemed to be a little fire. This I thought that he thrust several times into my heart, and that it penetrated to my entrails. When he drew out the spear he seemed to be drawing them with it, leaving me all on fire with a wondrous love for God. The pain was so great that it caused me to utter several moans; and yet so exceeding sweet is this greatest of pains that it is impossible to desire to be rid of it, or for the soul to be content with less than God.” –The Life of St. Teresa of Jesus, autobiography. 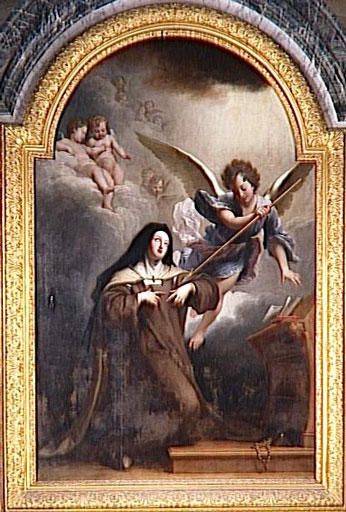 In Talmud & Kabbalah, the Seraphim are considered the higher angels, but the Bible doesn’t say that. The seraphim has a mystic role according with Catholic & Kabbalist Giovanni Pico della Mirandola‘s discourse ‘Oration on the Dignity of Man’ (1487): ” . . .he spoke of three divisions in particular: the Seraphim, Cherubim, and Thrones. These are the highest three choirs in the angel hierarchy, each one embodying a different virtue. The Seraphim represent charity (love), and in order to obtain the status of Seraphim, Mirandola declares that one must “burn with love for the Creator“. Wikipedia

Also her experience of mystical union with God is found in Gnosticism:

The symbolism of bridal mysticism is found already in early gnostic forms of Christianity, where the central sacrament is called the Bridal Chamber. There the feminine soul of the gnostic unites with the masculine spirit and is in this way spiritualized, that is, liberated from the limitations of mundane existence.

Related symbolism is found as well in the writings of the early Christian mystic Origen and the Neoplatonic mystic Plotinus. These three forms of mysticism are related and serve as the foundation for the history of mysticism in Christianity. – ARAS (Archive for Research in Archetypal Symbolism)

Correcting the last statement, is the foundation for the history of mysticism in Catholicism, we don’t see bridal mysticism in the New Testament nor in primitive church writings who fought Gnosticism infiltration. The Bridal Chamber is described in the gnostic Gospel of Philip as the means to attain Christhood, & also found in gnostic gospel of Thomas. The Bridal Chamber is taught with Catholic adoration of the Eucharist.

Gnostic Jews tried to infiltrate the early church, and were considered heretics by the apostles & were exposed. Gnostics (as Kabbalists) believe in calling angels so they can take prayers to God on behalf of humankind – a practice similar to Catholics praying for the intercession of saints. The Gnostics valued what they experienced and what they learned from ‘angels’ over Holy Scripture, this is the main reason apostle Paul warned about angels in Col. 2:18 & Gal.1:8, 2 Cor. 11:14. The Nicolaitans were also a Gnostic sect. “Thus you also have those who hold the doctrine of the Nicolaitans, which thing I hate.” (Rev.2:6, 14-15).

Promoters of Bridal mysticism always quote from Song of Songs. Which is also found in the opening of the Zohar ( -Main book of Kabbalah):

See Queen of Sabbath. The Catholic tradition of the Virgin Rosa Mystica, also uses the 13th.

In her book the The Inner Castle, chap. 1 Teresa wrote:

“. . .to consider our soul like a castle of a diamond or clear crystal, where there are many dwellings, just as in heaven there are many mansions. That although we consider it, sisters, is it not the soul of the righteous but a paradise where He has his delights? … and in the center, in the middle of all is the main dwelling place where the very secret exchanges between God and the soul take place. (1.1.3)