April 1, 2019 / cristolaverdad
This entry is part 2 of 9 in the series Mysticism
Mysticism

Mysticism promoters are especially targeting the younger generation. Not surprisingly there is a connection between the mysticism of the Emerging Church movement and Roman Catholic Mysticism .

Pope Francis, on Jun. 21st, 2017 said: “What the world today really needs is mystics and saints, men and women who “believe so deeply in Jesus that they become the image of Christ for the world,” -Pope Francis is a Jesuit & Jesuits follow the disciplines of Mystic Ignatius of Loyola.

Can mysticism lead to God?

“Mysticism is an attempt to gain ultimate knowledge of God by a direct experience that bypasses the mind. The strong influence of Catholic mysticism has helped immensely to transform the New Age Movement from being merely a counter-culture sub-culture to becoming a new source of spiritual vision for the world. Catholic mysticism has very effectively and subtly invaded many facets of life without being recognized or critically examined.

This has been actively promoted through self-help medical, educational and psychological programs employing methods such as meditation, philosophical programming, and self-hypnotic contemplation.

In melding Eastern subjective spirituality with Western self-assurance, Catholic mysticism has done much to effectively hijack public and private religious life and to invert core beliefs and values of the West. Mystical God consciousness is an attempt to replace Christ’s redemption and salvation. 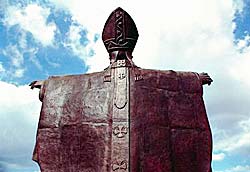 For centuries, the Roman Catholic Church has assimilated to herself the mystery elements of pagan religions. Subjective religious experience, or mysticism, continues to be the meeting point of pagan religions and Catholicism, particularly so since Vatican Council II, when Rome changed her major strategy in an attempt to bring Protestants back under the papal fold.

The marriage between Romanism and paganism is documented in official statements from Rome. For example, in Vatican Council II documents she states,

“…In Hinduism men explore the divine mystery and express it both in the limitless riches of myth and the accurately defined insights of philosophy. They seek release from the trials of the present life by ascetical practices, profound meditation and recourse to God in confidence and love. Buddhism in its various forms testifies to the essential inadequacy of this changing world. It proposes a way of life by which man can, with confidence and trust, attain a state of perfect liberation and reach supreme illumination either through their own efforts or by the aid of divine help. …The Catholic Church rejects nothing of what is true and holy in these religions.” [1] Vatican Council II Documents, No. 56, Nostra Aetate, “Declaration on the Relation of the Church to Non-Christian Religions,”, 28 Oct. 1965, Vol. I, Para. 2, p. 739.

“Then came the Second Vatican Council (1962-1965). Overnight the Catholic Church which had been a Western institution exporting its wares to the East became a world community. Asian and African bishops and theologians assembled in Rome and, with their European and American confreres, acknowledged that the Spirit of God is at work in all peoples and in all religions. Since then, most theologians recognize non-Christian religions as ‘valid ways’.” [2] William Johnston, The Mirror Mind (New York: Fordham University Press, 1990) p. 7.

It is on such a quagmire that Catholicism stands hand-in-hand with Buddhism and Hinduism, and out of which well-known Catholic mystics such as William Johnston and Thomas Keating have emerged. . . ”

– Modern day Contemplatives/Emergents will often refer to some of the following mystics in their books, videos, seminars,  etc.

The Cloud of Unknowing (anonymous monk)

Thomas a Kempis, (1380-1471. -His book ‘Imitation of Christ‘ influenced Ignatius Loyola & it’s still used as spiritual exercise by Jesuits. The book places emphasis on the devotion to the Eucharist as key element of spiritual life).

Through Which Avenues is this New Mystical Spirituality Entering the Church?