Dream of a ‘Storm approaching’

September 10, 2020 / cristolaverdad / Comments Off on Dream of a ‘Storm approaching’

I published this dream on January 1st 2014 in a blog (in Spanish), but I decided to publish it here also. It is about an event that I think we may see in the very near future and I ask each reader to please seek God for confirmation & direction. I do not know with certainty the time when it will occur, but I’m posting this mainly so that believers (the Church) can intercede and prepare spiritually for things coming our way.

This was a vivid dream I had on October 23, 2001 that I wrote down, (yes, 19 years ago). Recently I found that Oct. 23 in Julian calendar is equivalent to Nov. 5 in the Gregorian calendar that we use today. Even so many years already passed, I still remember the dream very clearly. I had this dream weeks after the catastrophe of  September 11th. I believe that the United States of America as a nation was given God’s warning that day, of the judgment that was coming in the near future. Please see (Luke 13: 4-5).  Like the towers, America will collapse, it will happen by design from within even it may look differently or that media says it was done by outsiders.

At the time of the attack of the towers many reacted with patriotism & desires of rebuilding, but no seeking God’s face, no repentance, & the prayers of some didn’t last long, the church went back to sleep (& into apostasy). Because of the lack of repentance and not seeking God genuinely, sadly this country will soon reap the fruits of what it has been sowing for so many years. The lost don’t know any better, but as it was in the past & as it is today, its always the believers responsibility to pray, intercede for others & seek Almighty God.

– The dream begins when I go out the threshold of the front door of my (earthly) father’s house. With one hand I hold my son’s hand, and with the other hand a girl, who is the daughter of the intercessory prayer leader in the church that we were attending at the time). We (the 3 of us) were interceding in tongues. I don’t think it’s a coincidence that both children birthdays happen on the same day, Nov. 5.

When I walked out the door the  first thing I saw was the the girl’s father (a church leader, today he is a pastor) who was just beginning to cross the road next to an intersection, and was heading towards the house where we were at. We kept on praying, we were in front of the door and we turned west of the front porch. I looked up at the skies (Northwest) as I saw very dense black clouds coming, swirling, moving violently and advancing very fast, looked as if hooves of hundreds of horses were galloping inside the clouds. 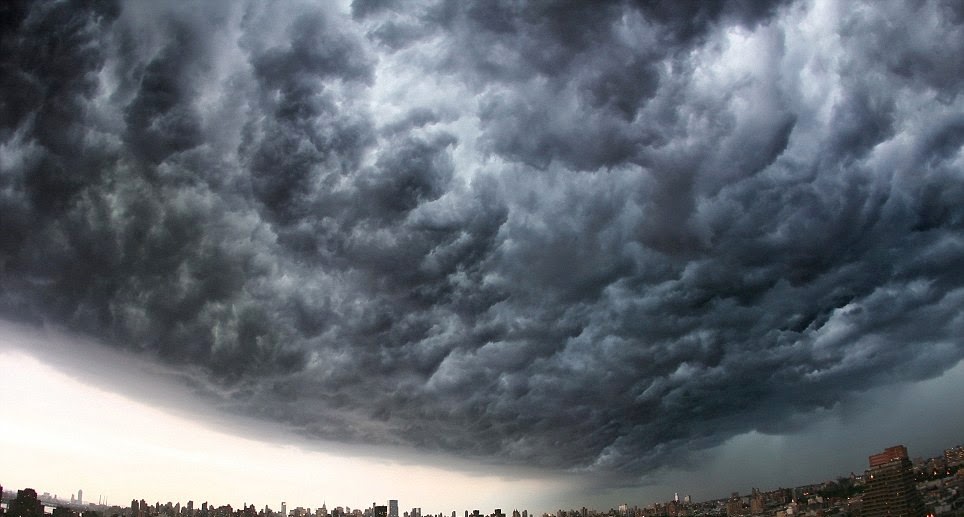 I recognized a looming danger, and I said “Something bad is coming“.  I turned and tried to go back to the house, but the girl who I was still holding her hand, couldn’t walk. Because of the imminent danger I didn’t want to let her go, but I insisted 2 times and think at the third time she finally walked & we headed toward the house which is now full of light & glowing in the dark. It was daytime when we left the house, only few minutes had passed, but now the sky and everything outside was getting very dark, probably because of the black clouds of the approaching storm, but this darkness happened very rapidly.

As we were close to the house we saw the leader who almost finished crossing the street. We reached the door, I stood under the threshold of the door looking out, the children are inside and are no longer interceding with me, but I was searching with my sight for the church leader who was close but wasn’t able to reach the house, the storm caught him outside. From the door I could only see now total darkness, but I was able to see some pieces of small debris that were flying outside next to the house & that were possible to be seen only because of the light emanating from the house, the rest was total darkness.

Outside was raging a very strong storm and terrible darkness, but in contrast, inside my father’s house there was an indescribable peace and the house glowed with bright light in the middle of that darkness. Nothing seemed to affect the peace inside the house, not even the noise of the storm that was unleashed outside could be heard inside. . . And then, I woke up. –

I asked the Lord in prayer for the meaning of the dream and I understood that means darkness & an attack/invasion that is coming to this country (USA), I later found this biblical passage that to me was a confirmation:

“a day of darkness and gloom, a day of clouds and thick darkness. Like blackness spreading over the mountain, a great and mighty army comes,
such as was never before, and will never be again, even through the years of all generations. “Joel 2:02.

– [Because this passage in Joel is talking about the ‘Day of the Lord‘, then I really hope that God will take His Church to shelter (the rapture) soon after the unleash of that storm. But if that isn’t the case then the Lord will protect the ones that abide in Him].

I think this dream means that at the darkest point of the storm a  war/foreign enemies will come inside North American territory. This country will be invaded, and the army seems to come from the northwest, is it Russia, China, their allies (Muslims)? -In another dream I heard about a Chinese invasion on a month of July.

The “Church leader” crossing the road I believe represents in general the leadership of the Church. Judgment begins at the house of God & begins with the leaders first (1 Peter 4:17;Ezekiel 34), sadly many lukewarm believers will be left out in the storm, taken by surprise. Here in the United States there is a well-known expression that says: “At the crossroads” which means: “Critical moment of making decisions. At a critical point, when decisions with far-reaching consequences must be made.”   I believe this storm will begging close to a time of elections, because this is a critical point of decision or a ‘crossroads’ for the entire nation!

On Nov.5 of that year I had the dream (2001) there was a mid-term elections. I had the dream on the month of October & there is a political term named “October surprise” that has to do with elections, & it means: ‘news event deliberately created or timed or sometimes occurring spontaneously to influence the outcome of a presidential election‘.

– Our next presidential elections are on Nov. 3, 2020, the winner (or a temporary successor) takes powers in 2021,  later will be a mid-term election on Nov. 8, 2022,  I see highlighted this period of time of the next 2 years (2 children or birth dates), from Nov.5, 2020-2022. We should consider that anyways it is possible this presidential election of 2020 could be delayed or may not even happen at all.

I believe the girl represents the small part (the remnant) of the Church that still intercedes. Please faithful church, I encourage you to continue!  My father’s house represents the protection, the shelter of God, our heavenly Father. Only in Him there is refuge and peace. We must not depart from His presence!  Please read about Psalm 91.

The Lord have shown His people in many occasions, through the years that judgment is coming to America. I think we got nothing to loose if we start praying for the Church, our country & to seek God’s direction, specially because we are already in times of national decline & still more difficult times ahead of us. If we haven’t started to pray daily yet, please let us start today.

Either way we look at this dream, even if you don’t believe this may happen, it means : Intercession! time of deep prayer! Isn’t this anyways what we Christians should be doing without ceasing? 1 Thes. 5:17, Eph. 6:18, Rom.8:26 & 12:12, Col. 4:2, etc. I’m not asking for anything else, so you shouldn’t worry because if you pray to God, He will show you the truth, many of the bad things the enemy had planned for America will be adverted & He will tell you what you need to do. (I really hope I’m wrong about this dream, but again, we got nothing to loose by praying).

I know some of my brothers and sisters in Christ don’t believe in praying in tongues (many because of fake &/or the abuse of the gifts by some  Charis-mania movements), but you can also pray in your normal language being led by the Holy Spirit of God. Pray with an intense and deep supplication to God in the name of His only begotten son Jesus Christ, pray with you whole heart, pray like you have not prayed before. This is the only reason I’m posting this dream, I just want to be faithful to what I believe is from God & ask the brethren to please pray. I really believe this is what God wants us to do right now, even if we cannot be together physically, we can be united in the Spirit of God.

God is not the destroyer, see more here, even some will try to tell you that. Almighty God is a loving Father who protects people from harms of the enemy, He wants to bring life & blessings even when we don’t deserve it. He is full of compassion, waiting for us to repent, but when time passes on and we continue in our sins & we don’t repent, judgment has to come, He has to clean His house. Then He just removes His hedge of protection from around us & allows us to receive the consequences of our own actions & choices (also be careful who you follow or endorse, if we are partakers of their sins, we must be of their punishments also (1 Cor.10:21, 2 Cor. 6:14-17, Eph.5:7, 1 Tim.2:22, 2 Jn.1:11, Rev.18:4). This storm is not God’s plan, it is the enemy’s, but we decide. Please get close to Him today, He is our only refuge.

“Silence in the face of evil is itself evil; God will not hold us guiltless. Not to speak is to speak. Not to act is to act”.
-Dietrich Bonhoeffer (Pastor during Nazi Germany).

I just found there are many voices deceiving people right now, false prophets, instigators, etc. it can be confusing & overwhelming at times. Many (I even heard a ‘pastor’) are inciting believers to raise up in arms. Self-defense is biblical or to defend your loves ones (Lk.11:21), but is not godly to go out & look up for fights, or as part of a militia group, etc., this is a trap! Remember our battles are not carnal but spiritual (2 Cor.10:3-4, Eph.6:12). This is just another reason why we need to get closer to Him beloved, pray & worship Him, you will find peace & direction in His presence. He is coming soon, put your lives & the lives of your love ones in HIS HANDS and rest in HIM alone.