Most Christians celebrated in their homes Palm Sunday to commemorate Jesus’ triumphal entry in Jerusalem (Matt. 21:1-11; Mk. 11:1-11; Jn. 12:12-16).  History asserts that the earlier Palm Sunday was observed in the Greek Church in the 4th century, but there are no signs of the observance before that time. Many churches around the world use palm branches, processions, etc. This year 2020 because of the Corona-virus pandemic many will celebrate also Resurrection Sunday in their homes. We just want to encourage you, not to be sad because this year you cannot celebrate according to your traditions, but instead reflect on Jesus, what He really did on those days, who He really is, etc. Please also pray for the people that are sick & most importantly that many will receive salvation on the middle of these times of trouble.

You maybe know by now  that according to the Scriptures Jesus’ death was not on a Friday. We know for sure according with the Scriptures that Jesus rose from the death on a Sunday, but we also know by reading the Word of God that there was a prophecy: “so will the Son of Man be three days and three nights in the heart of the earth.” Mat. 12:38-40; 16:4, Luke 11:29. But if He died a Friday, then the prophecy or the sign of Jonah would not be fulfilled, because Sunday would be the second day, not the third as the prophecy said. So let us find out why many think Jesus died on a Friday.

-The next Bible verse, shows Jesus didn’t die on a Friday, the apostle John clarifies that after Jesus die it was a high or ceremonial sabbath, not a regular weekly sabbath. (All the Jews & people of that time knew that after Passover, the Feast of Unleavened Bread was a high Sabbath) & this is the reason that many wrongly teach Jesus die on the cross on a Friday.

When Jesus had received the sour wine, He said, “It is finished.” And He bowed His head and gave up His spirit.  31 Since it was the Day of Preparation, to prevent bodies from remaining on the cross on the Sabbath day (for that Sabbath day was a high day), the Jews asked Pilate that their legs might be broken, and that they might be taken away. 32 Therefore the soldiers came and broke the legs of the first and of the other who was crucified with Him. 33 But when they came to Jesus and saw that He was dead already, they did not break His legs. John 19:31-33,  (Mark 15:33-43).

Sabbath-Nisan 16= Weekly Sabbath. They also rested on the weekly Sabbath. This is why the women prepared spices & ointments after placing Jesus in the tomb. – Luke 23:52-56. to anoint Him on Sunday, but they found the stone for the door of the sepulcher rolled away.

“In the end of the sabbath (sing. or plural) as it began to dawn toward the first day of the week, came Mary Magdalene and the other Mary to see the sepulcher.” Mat.28:1

“When the Sabbath was past, Mary Magdalene, and Mary the mother of James, and Salome, bought spices, so that they might go and anoint Him. 2 Very early in the morning, on the first day of the week, they came to the tomb at the rising of the sun. 3 They said among themselves, “Who will roll the stone away from the door of the tomb for us?”

4 But when they looked, they saw that the stone had been rolled away. For it was very large. 5 And entering the tomb, they saw a young man sitting on the right side, clothed in a long white robe. And they were frightened.

6 He said to them, “Do not be frightened. You are looking for Jesus of Nazareth, who was crucified. He is risen. He is not here. See the place where they laid Him“. Mark16:1-8,- Greek.

Thursday Jesus was buried close to sundown, it was the 1st night, then Friday 1st day & 2nd night, Saturday 2nd day & 3rd night, & then Sunday was 3rd day. “and that He was buried, and that He rose again the third day according to the Scriptures” 1 Cor.15:4

Jesus rose from the dead on a Sunday not a Sabbath as some Hebrew Roots & Church of God sects like to teach. To see more please check Sabbath.

After the deaths of the Apostles, many men who where leaders in the Church wrote extensively and many of their writings have been preserved. While their writings are not considered inspired like the bible & shouldn’t change doctrine, still they are very valuable in that they let us know the state of the Church in their day and what early Christians believed and practiced. (Instead of looking at writings of Jews who rejected Jesus, like Talmud, etc. the Hebrew Root teachers should look better at early Christians writings). Here are just a few early Christian writing (when Roman Catholic Church didn’t exist yet) that proof that since the beginning of the church they worshiped on Sunday or what they called the ‘Lord’s day‘:

-90 AD DIDACHE: “Christian Assembly on the Lord’s Day: 1. But every Lord’s day do ye gather yourselves together, and break bread, and give thanksgiving after having confessed your transgressions, that your sacrifice may be pure. 2. But let no one that is at variance with his fellow come together with you, until they be reconciled, that your sacrifice may not be profaned. 3. For this is that which was spoken by the Lord: In every place and time offer to me a pure sacrifice; for I am a great King, saith the Lord, and my name is wonderful among the nations.” (Didache: The Teaching of the Twelve Apostles, Chapter XIV)

-100 AD BARNABAS: Moreover God says to the Jews, ‘Your new moons and Sabbaths I cannot endure.’ You see how he says, ‘The present Sabbaths are not acceptable to me, but the Sabbath which I have made in which, when I have rested [heaven: Heb 4] from all things, I will make the beginning of the eighth day which is the beginning of another world.’ Wherefore we Christians keep the eighth day for joy, on which also Jesus arose from the dead and when he appeared ascended into heaven. (15:8f, The Epistle of Barnabas, 100 AD, Ante-Nicene Fathers , vol. 1, pg. 147)

-IGNATIUS, Bishop of Antioch 107 AD, In the Shorter Recension of Ignatius’ Epistle to the Magnesians, Chap.IX, he says: “If therefore, those who were brought up in the ancient order of things have come to the possession of a new hope, no longer observing the Sabbath, but living in the observance of the Lord’s Day, on which also our life has sprung up again by Him and by His dead — whom some deny, by which mystery we have obtained faith, and therefore endure, that we may be found disciples of Jesus Christ, our only Master.”

-150AD JUSTIN: ” The command of circumcision, again, bidding [them] always circumcise the children on the eighth day, was a type of the true circumcision, by which we are circumcised from deceit and iniquity through Him who rose from the dead on the first day after the Sabbath, [namely through] our Lord Jesus Christ. For the first day after the Sabbath, remaining the first of all the days, is called, however, the eighth, according to the number of all the days of the cycle, and [yet] remains the first.”. (Justin, Dialogue 41:4)

-150AD JUSTIN: But if we do not admit this, we shall be liable to fall into foolish opinion, as if it were not the same God who existed in the times of Enoch and all the rest, who neither were circumcised after the flesh, nor observed Sabbaths, nor any other rites, seeing that Moses enjoined such observances… For if there was no need of circumcision before Abraham, or of the observance of Sabbaths, of feasts and sacrifices, before Moses; no more need is there of them now, after that, according to the will of God, Jesus Christ the Son of God has been born without sin, of a virgin sprung from the stock of Abraham. (Dialogue With Trypho the Jew, 150-165 AD, Ante-Nicene Fathers , vol. 1, page 206)

-150AD JUSTIN: “And on the day called Sunday, all who live in cities or in the country gather together to one place, and the memoirs of the apostles or the writings of the prophets are read, as long as time permits; then, when the reader has ceased, the president verbally instructs, and exhorts to the imitation of these good things. … But Sunday is the day on which we all hold our common assembly, because it is the first day on which God, having wrought a change in the darkness and matter, made the world; and Jesus Christ our Saviour on the same day rose from the dead.” (First apology of Justin, Weekly Worship of the Christians, Ch 68)

-150AD JUSTIN: Moreover, all those righteous men already mentioned [after mentioning Adam. Abel, Enoch, Lot, Noah, Melchizedek, and Abraham], though they kept no Sabbaths, were pleasing to God; and after them Abraham with all his descendants until Moses… And you [fleshly Jews] were commanded to keep Sabbaths, that you might retain the memorial of God. For His word makes this announcement, saying, “That you may know that I am God who redeemed you.” (Dialogue With Trypho the Jew, 150-165 AD, Ante-Nicene Fathers , vol. 1, page 204)

-190AD CLEMENT OF ALEXANDRIA: He does the commandment according to the Gospel and keeps the Lord’s day, whenever he puts away an evil mind . . . glorifying the Lord’s resurrection in himself. (Ibid. Vii.xii.76.4) 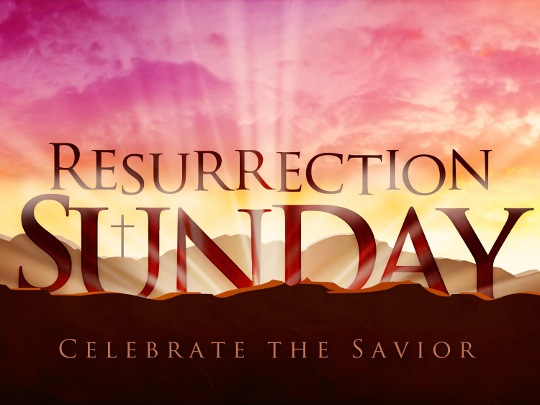 Jesus is Alive!!! Have a Blessed Resurrection Sunday!

Beloved please be careful with the movies about Jesus’ life or about His crucifixion that you watch, most of them are not biblical accurate & what happens is that we learn wrong doctrines & memorize them with the help of powerful images that impregnate our minds.

For example ‘The Passion of the Christ’ (with a sequel in the makings). Many of the scenes, including of the crucifixion, were taken from the visions of a mystic nun who bore the stigmata, Anne Catherine Emmerich, who claimed to have seen visions of the passion, death and resurrection of “Christ”.  Gibson (Who belongs to the Opus Dei, as well as his director’s assistant Jan & Alberto Michelini-https://odan.org/media_passion) stated that the goal & intention for making the film: “is to shake modern audiences by brashly juxtaposing the “sacrifice of the cross with the sacrifice of the altar (Eucharist) –which is the same thing.” A sacrifice that is offered continually, this is the Catholic doctrine of Transubstantiation.

Please check this articles for more information on ‘The Passion of the Christ’ :

The Passion of the Christ, by Richard Bennett, ex-Catholic Priest

What Lies Behind Mel Gibson’s The Passion of the Christ

This is not a picture of the Lord but of a false christ: Zechariah 11:17

Who is the Destroyer?