June 1, 2018 / cristolaverdad
This entry is part 2 of 4 in the series Born Again
Born Again

God made promises to Abraham (Gen.12:1-3, 17:7) & his’ Descendant/The Seed‘ (Christ, the Messiah) but the Jews stumbled on this (Isaiah 28:16, Rom. 9:33), they misinterpreted it & took it as it was just for all Abraham’s descendants in the flesh, Israelites. Sadly they still believe that today! Most of them believe in salvation because of their race. But we’ll talk about this on a next post ‘Who is Abraham’s Seed‘.

All through out John chapter 3 we notice so many times that salvation if for whosoever believes in Jesus Christ. The King James translates the Greek word ‘pisteuōn‘ in ‘beliveth‘ to indicate the verb is in present progressive ‘believing‘, the action still continues.

12 If I have told you earthly things, and ye (You all) believe not, how shall ye believe, if I tell you of heavenly things? 13 And no man hath ascended up to heaven, but he that came down from heaven, even the Son of man which is in heaven. 14 And as Moses lifted up the serpent in the wilderness, even so must the Son of man be lifted up: 15 that whosoever believeth in him should not perish, but have eternal life. John 3: 12-15.

Verse 13. -Our Lord most probably spoke to correct a false notion among the Jews (that is still taught today by Talmud &  Kabbalah), that said Moses had ascended to heaven, in order to get the law, a misinterpretation of Deut. 30:12 &  Ex.24:18. See also Prov.30:4. (Judaism teaches Moses also ascended after his death, Babylonian Talmud Yoma 4a). But the bible says: God buried Moses in an unmarked grave (Deut. 34:6).   No man went to heaven on their own except God took them (e.g. Enoch & Elijah). Only Christ can teach us heavenly (spiritual) things & with authority because He came from heaven & He is the Son of God. 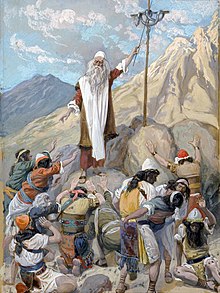 The Brazen Serpent (watercolor circa 1896–1902 by James Tissot) Wikipedia

Vs. 14. -All the Jews knew well about the serpent that Moses made, event recorded in book of Numbers. Jesus uses this illustration to signify He would die on a cross for our sins,  John 12:33.

“5 The people spoke against God and against Moses, “Why have you brought us up from Egypt to die in the wilderness? For there is no bread or water, and our soul loathes this worthless manna.

6 So the Lord sent poisonous (H8314) serpents among the people, and they bit the people, and many children of Israel died. 7 So the people came to Moses and said, “We have sinned for we have spoken against the Lord and against you. Pray to the Lord, and He will take away the serpents from us.” And Moses prayed for the people. 8 The Lord said to Moses, “Make a poisonous serpent, and put it on a pole (H5251=standard, banner), and it will be, that everyone who is bitten, when he looks at it, will live;” Numbers 21:4-9

The descendants of Esau (Edom) had denied Israel permission to cross their land on their way to Canaan. Then Moses & the Israelites had to make a longer journey surrounding the land of Edom (Num.21:4). The discouraged Israelites started  to grumble & complain about God’s provision, showing their lack of faith (even after crossing the Red Sea).

Because of their sin, just like their poisonous words, they encountered poisonous snakes, which represented their sin & its consequence, death. ‘ the wages of sin is death‘ (Rom.6:23). People understood, repented & confessed their sin vs.7. Moses interceded for them & made a replica of the poisonous snake out of bronze & put it on a pole. Everyone who was bitten or dying would look at the bronze serpent & live.

In the same way, everyone dying from the consequences of sin, will look in faith (John 3:15) at Jesus’ sacrifice on the cross (our mediator & intercessor), and live. To be saved one must begin by acknowledging our sin & our need of a Savior.

Note: The personal pronoun ‘he’ is not in the original Greek text. Jesus is saying I AM! God’s name given to Moises Ex.3:13-14!!! They didn’t grab stones when Jesus called them sons of the devil vs.44 but decided that He was blaspheming when He said I AM vs. 58) and that He should be stoned (according to their law).

“Now judgment is upon this world. Now the ruler of this world will be cast out. 32 And if I be lifted up from the earth, I will draw all men to Myself. 33 He said this to signify by what kind of death He would die.” John 12:31-33.

“Repent therefore and be converted, that your sins may be blotted out, so that times of refreshing may come from the presence of the Lord, ” Acts 3:19

– We need to repent from our sins and go to God. He sent His son that whosoever believes in Him should not perish, but have eternal life.

– We need to know who is Jesus. He isn’t just a good teacher or a great man. He is God! He is the Messiah, the promised Seed!

You may have heard some people teaching that Jesus is the snake at the pole, others say, that He became a sinner (took on a sin nature) at the cross! Benny Hinn one proponent of that doctrine, stated: “Hear this! He who is the nature of God became the nature of Satan when he became sin!” (Benny Hinn, Trinity Broadcasting Network, December 1, 1990). His friend Kenneth Copeland have same teachings. He said: “The righteousness of God was made to be sin. He accepted the sin nature of Satan in His own spirit.” & then quotes Isaiah 53:10-11.  (Kenneth Copeland, “What Happened from the Cross to the Throne,” 1990, audiotape #02-0017, side 2) .

But notice the  Servant (Jesus) in Isaiah 53:11 is called the “Righteous” even in the context of bearing the sin of others. He bore our sins but sin didn’t come part of Him. “knowing this, that our old man is crucified with him, that the body of sin might be destroyed, that henceforth we should not serve sin. ” Rom.6:6

-Some may ask then, how can we reconcile this with what it says in 2 Corinthians 5:21 ?  “For he hath made him to be sin (G266 hamartia) for us, who knew no sin; that we might be made the righteousness of God IN Him.”

B/ Some explain that He became sin judicially, not in nature. But please, also keep always in mind the Old Testament concept of expiation or sin offering. From the beginning, clean & innocent blood was necessary to cover sin. “without the shedding of blood there is no forgiveness.” (Heb. 9:22). When Adam & Eve sinned they tried to cover themselves making aprons with fig leaves (their own works), but God clothed them with the skin of a sacrificed animal (Gen.3:21). The sacrificial animal always had to be “without defect” (Exodus 12:5-7, Leviticus 4:3, 23, 32). The unblemished animal did not become of sinful nature or blemished; on the contrary, it’s innocent blood was necessary to  cover the sins of the people.  Animal sacrifices could only cover sins, but could not remove them. Hebrews 10:4. The root of the Hebrew word ‘kaphar’ H3722 translated “atonement” has the idea of “covering,” not removal. But when Christ shed His own Holy blood, it was once and for all a perfect sacrifice that removes, washes sins away. (Revelation 1:5, 7:14, 22:14, etc) -(G3068, G4150).

If Christ became a sinner at the cross, then how could sinful blood clean sins?  How can we become righteous IN Him? Could a sinner enter the Holy place? Of course NOT! Please, don’t believe them, they are just Gnostics teaching blasphemies! .

12 neither by the blood of goats and calves, but by his own blood he entered in once into the holy place, having obtained eternal redemption for us. 13 For if the blood of bulls and of goats, and the ashes of an heifer sprinkling the unclean, sanctifieth to the purifying of the flesh: 14 how much more shall the blood of Christ, who through the eternal Spirit offered himself without spot to God, purge your conscience from dead works to serve the living God? Hebrews 9:12-14

For you know that you were not redeemed from your vain way of life inherited from your fathers with perishable things, like silver or gold, 19 but with the precious blood of Christ, as of a lamb without blemish and without spot. 1 Peter 1:18-19

C/ In Lev.4:24 the Hebrew word ‘chattath’ H2403 could mean both sin or sin offering (expiation), the corresponding Greek words is G266 hamartia, the same word used by the apostle Paul (who new well both Hebrew & Greek) in 2 Cor.5:21.  Sin-offering is an alternate meaning of the word ‘hamartia’, found in the Greek ‘Old Testament’ or Septuagint. The Septuagint translates the Hebrew ‘chattath’ with the Greek word ‘hamartia’ in ninety-four places in Exodus, Leviticus, and Numbers, where a sin-offering is meant.

Also it is very important to understand that was not the serpent on the pole that brought healing and saved the Israelites from certain death, but the power of God! They needed to believe what God said to Moises & look up for redemption.

Years later the people of Israel started worshiping the snake of bronze, & eventually the snake was destroyed by king Hezekiah (2 Kings 18:3). But unfortunately it didn’t end there, and the worship to the snake still continues to this very day! We must never worship the tools or the people God chooses to use, but always bring the honor and glory to God alone!

Teachings about the snake are found in the Talmud and Kabbalah, were it says the snake is holy. The Zohar states: “The Holy Serpent is the fountainhead, root, and essence for all God’s sacred revelatory light.”

Because they rejected Jesus Christ, they are ready to receive the Antichrist (John 5:43). Please brethren be careful, & avoid Jewish fables! Titus 1:14.