10 be it known to you all, and to all the people of Israel, that by the name of Jesus Christ of Nazareth, whom you crucified, whom God raised from the dead, by Him this man stands before you whole. 11 He is ‘the stone you builders rejected, which has become the cornerstone.’  2 There is no salvation in any other, for there is no other name under heaven given among men by which we must be saved.”  Acts 4:10-12

On March 25, 2022, (Day of the Annunciation) the pope consecrated Russia & Ukraine to the “immaculate heart” of Mary, or the ‘Madonna‘, as she’s called in Rome, Italy. 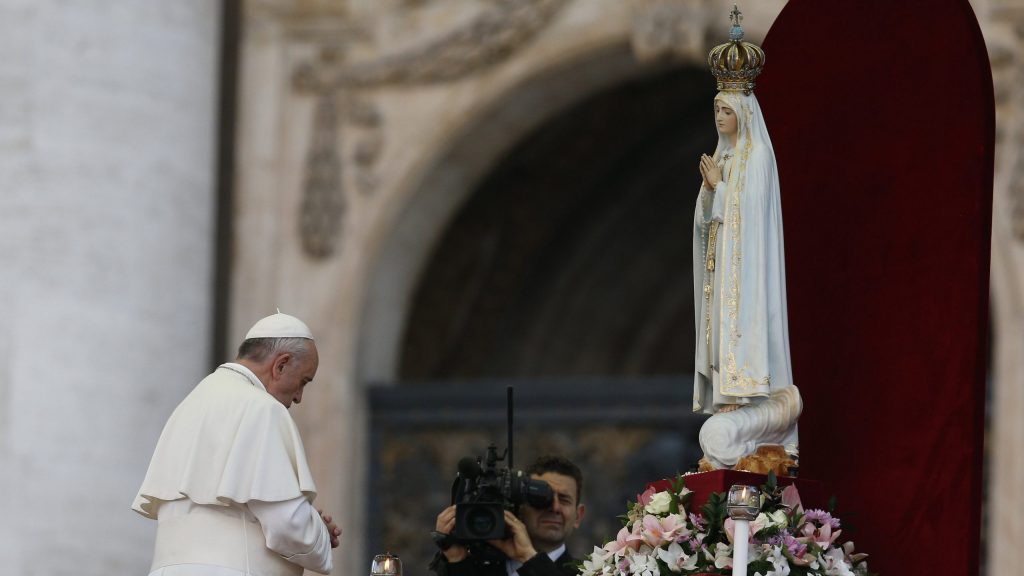 Pope Francis prays in front of the original statue of ‘Our Lady of Fatima’ during a Marian vigil in St. Peter’s Square at the Vatican in Oct. 12, 2013, file photo. The pope has invited the bishops of the world to join him in “consecrating and entrusting” Russia and Ukraine to Mary March 25, 2022. (CNS photo/Paul Haring)

Beloved this has a very dark purpose behind it that I have mentioned before in this blog. By using technology (which is unknown to most people) they plan ‘Marian apparitions‘ in different countries (Russia, China, US) which will help unite many religions into ONE world religion (specially Muslims- since Fatima was the daughter of Mohamed), & cause a great apostasy (fallen away) among many Christians .

There are more but I’m going to give 4 reasons why I believe Marian apparitions may be coming soon, & I think probably starting on a July 13th or on a 13th:

1/ Because in one of the apparitions of Fatima, Portugal, on July 13th (she appeared from May–Oct 1917 always on a 13th) the Lady supposedly showed  3 children a vision of hell & the 2nd secret. These were not revealed at the time of the apparitions, but 24 years later through the memoirs of Lucia in 1941! Nobody saw the Lady either, except the children:

“You see hell, where the souls of poor sinners go.To save them God wishes to establish in the world the devotion to my Immaculate Heart. If they do what I will tell you, many souls will be saved, and there will be peace.  The war is going to end.  But if they do not stop offending God, another and worse war will begin in the reign of Pius XI. When you shall see a night illuminated by an unknown light, know that it is a great sign that God gives you that He is going to punish the world for its crimes by means of war, of hunger, and of persecution of the Church and of the Holy Father.  To prevent this I shall come to ask the consecration of Russia to my Immaculate Heart and the Communion of reparation on the first Saturdays.  If they listen to my requests, Russia will be converted and there will be peace. If not she will scatter her errors through the world, provoking wars and persecutions of the Church.  The good will be martyred, the Holy Father will have much to suffer, various nations will be annihilated.  In the end my Immaculate Heart will triumph. The Holy Father will consecrate Russia to me, and it will be converted and a certain period of peace will be granted to the world.”

–But in the year 2000 sister Lucia said this secret was fulfilled already in 1991. 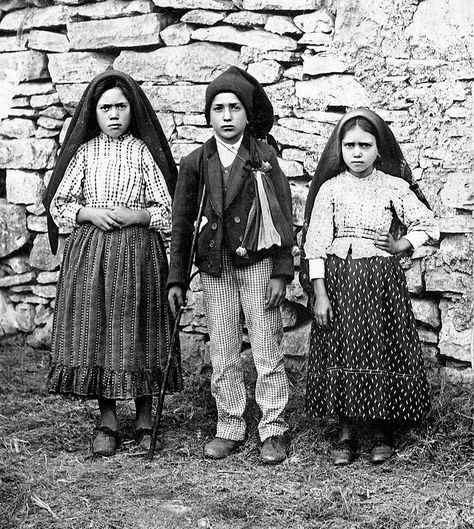 Any true Christian who reads the Bible, will see easily the contradictions of what the lady of all these Marian Apparitions says vs. the Word of God. The Mary of the apparitions comes in her own name with a new & different gospel, that contradicts the words of Jesus our Lord & only Savior, the son of God who died on the cross to pay for our sins, with a gospel according to them, where Jesus didn’t really saved us, so they give us a different savior: ‘Mary’, who didn’t die for us or paid for our sins, who is not God in the flesh, just a great human being, example of humility & obedience to God, but none the less a creation, & this apparition says she will save humanity with a devotion to her pure heart, contradicting everything that is written in the Scriptures! If humanity could be save by a devotion, then why did Jesus had to come to earth & die on the cross for our sins?! What did the apostles warned us regarding a different gospel? See Gal. 1:6-12.

5 There is one God and one mediator between God and men, the Man Christ Jesus, 6 who gave Himself as a ransom for all. This was the testimony given at the proper time. 1 Tim.2:5-6

Even among Catholics there is a lot of controversy around this subject of Fatima, there are different versions of the 3 secrets, changed or incomplete messages, 2 different sisters Lucia, (the only survivor of the 3 children, the other 2 died of influenza a year later in 1918, made saints by Pope Francis in 2017), etc.

So I think the Marian apparitions may start soon, but I suspect this time they may try to show also apparitions of Jesus to deceive many Christians:

2:1 Now we beseech you, brethren, by the coming of our Lord Jesus Christ, and by our gathering together unto him, 2 That ye be not soon shaken in mind, or be troubled, neither by spirit, nor by word, nor by letter as from us, as that the day of Christ is at hand.  3 Let no man deceive you by any means: for that day shall not come, except there come a falling away first, and that man of sin be revealed, the son of perdition;  . . .   9 Even him, whose coming is after the working of Satan with all power and signs and lying wonders, 10 And with all deceivableness of unrighteousness in them that perish; because they received not the love of the truth, that they might be saved.  11 And for this cause God shall send them strong delusion, that they should believe a lie: 12 That they all might be damned who believed not the truth, but had pleasure in unrighteousness. 2 Thess. 2:1-12

2/ Also, a former Jesuit priest that converted to Christianity, Alberto Rivera gave many warnings to the evangelical church before he was food poisoned and later die. One of those warnings was about the plans of the Vatican & the Fatima devotion, he said:

“But we haven’t seen anything yet. The Jesuits have their Virgin Mary scheduled to appear 4 or 5 times in China, Russia, and major appearance in the U.S.” Excerpt taken from article written by : ex-Jesuit priest, Alberto Rivera. (his old website has been taken down, but it can be found through archive.org here.)

3/ A Christian Journalists in 1994, exposed a Project (1). He mentioned about plans for a new world religion. Saying they will cause some earthquakes in different parts of the world which will expose (fake) new discoveries, that will be used to discredit major religious doctrines. And part of the plan is a big event, of a mystic experience with a Jesus/Maytreya/Cosmic Christ, a new world messiah speaking into the minds of people around the world (something they can do now, thanks to the shots & the nanotechnology injected in them, but that also are putting in drinking water, injectables, rain, etc.)

This technology uses 5G & graphene, so when this material is activated w/ frequencies it could cause pain, others will die & others may feel a burning sensation. Also Nasa will perform some heavenly signs, hologram images, sounds, even a red sky (1), etc. They want to cause a global religious conversion to implement a luciferian one world religion to start their new world system. To be part of the New World System, people will have to accept first the New World Religion. I believe people that accept this inter faith world religion or false messiah, will be given the ‘mark of the beast’. The Digital ID passport is a trap into the Beast System, no where to hide & everyone that receives it, will receive also the mark. (Rev. 13:11-18).

4/ Another reason, is a video of Madonna in Israel, singing for Eurovision on May 2019, few months before the pandemic, that I believe it may be giving clues of their plans for 2022 & beyond. Her presentation has 3 parts, with 2 songs and in the middle a weird monologue. The steep stairs (inappropriate for a public & televised singing & dancing presentation) is also divided into 3 sets:

-A) The 1st song is ‘Like a prayer‘, the setting is a Catholic church or cathedral, see windows and bells ringing. I noticed that in the Gregorian chant (music of the Roman Rite, performed in the Mass and the monastic Office) the monks  call her name (min 0:52) ‘Madona‘ (which is also name of the virgin Mary in Rome/Vatican), they call – 4 times– , And then she appears, on top of the stairs, and sings:

“Life is a mystery. Everyone must stand alone
I hear you call my name And it feels like home (and then she removes the hood & reveals her face).
When you call my name It’s like a little prayer,” . .  etc’ (all garbage, be careful the music will stick)

She looked like a ‘high priestesses‘ performing a black mass (ritual where the devil is worshiped), colors in red & black. Recently I found out that Madonna in real life was promoted in 2005 to high priestess of kabbalah. Eurovision May 18, 2019 in Tel Aviv, Israel. Madonna performing live on a Sabbath/Saturday. Moment when she revealed her face.

After going down the first set of stairs you see a sword on her dress, she uses her right leg, then go down the 2nd set using her left leg and you see a snake painted on her dress, (this has to do with kabbalah initiation which is what they are looking to accomplish for the entire humanity with their ONE world religion – “The Flaming Sword represents movement down the Tree of Life from the top. The counterpart is the Serpent of Wisdom, which represents movement from the bottom of the Tree to the top. In Crowley’s system, this symbolizes the ordeals of initiation.”).