October 9, 2018 / cristolaverdad
This entry is part 2 of 7 in the series Antichrist
Antichrist

Several Jewish organizations have been preparing in the last years, for the construction of the 3rd temple and everything is almost ready, including the priesthood, temple tools & the red heifer (calf) for the purification of the temple.  There are several plans and models to rebuild the temple. This one includes a compound structure with eight prayer houses, 4 for each main religion & 4 mystic religions including Kabbalah. (Using the Dome of the Rock). 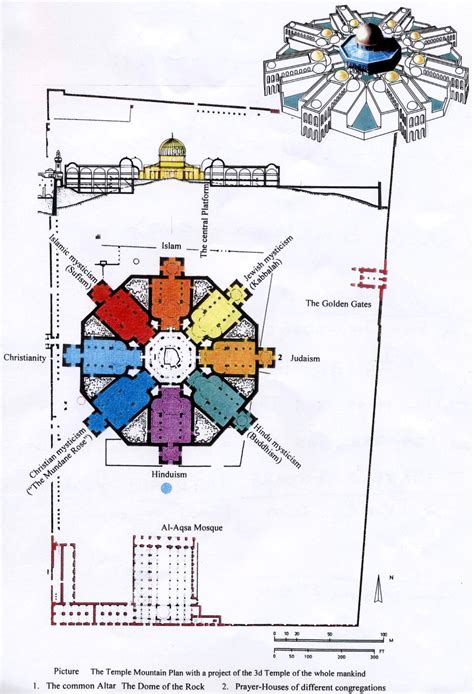 The Temple Mountain plan with 3rd Temple for mankind from TempleMount.org.

Those who arrested our Lord Jesus and the council of Jewish religious leaders who questioned Him before sentencing Him to death, belonged to the Sanhedrin, Matthew 26:57. The Grand Sanhedrin court was made up of 70 rabbis and a high priest, they met at the 2nd temple but their services in the temple ceased in 70 A.D when the 2nd temple was destroyed.

Their job was to enforce their religious & political laws, but because of their days of fasts, holy feasts & new moons, they were also in charge of the Jewish calendar (law & time). The present Hebrew calendar is the product of evolution, including a Babylonian influence.

On Oct. 13th 2004 the Grand Sanhedrin was restored after few failed attempts in the past & recently they even appointed their high priest.

The people forming part of all these plans of reconstruction of Sanhedrin,  3rd Temple, the temple utensils, etc. are Kabbalists, (the Rothchilds, Masons/Knight Templars are Kabbalists & also part of this project). The Third Temple rebuilding is a Kabbalistic/Masonic belief, and it is not biblical.

“Alternatively, President Trump can choose to be a part of a process  to bring the Messiah and unprecedented blessing to the world, in the same manner that King Cyrus played his part in building the Second Temple.”

Note: links are in the original.  1st link: ‘process’- Sacred Geomatria is Kabbalah! Based on a text in the Zohar. -2nd link ‘King Cyrus’: Sanhedrin already asked Putin and Trump to build the Third Temple in Jerusalem! That head covering is called ‘kippap’ and is not biblical, as a matter of fact is prohibited in the New Testament for a man to cover their head when praying (‘a man shall not cover his head‘. 1 Cor.11:7). Jews recognize this head covering is based in the Talmud (oral law):

“The kippah does… have some basis in Talmudic literature, where it is associated with reverence for God. In Kiddushin 31a, for example, R. Honah ben Joshua declares that he “never walked four cubits with his head uncovered… Because the Divine Presence is always over my head.” In like manner, tractate Shabbat 156b states, “Cover your head in order that the fear of heaven may be upon you”; and in Berachot 60b, it is written, “When he spreads a cloth upon his head he should say: Blessed are you (God)… Who crowns Israel with splendor…”

In the Middle Ages, French and Spanish rabbis introduced the practice of covering one’s head during prayer and Torah study, and Maimonides (1135-1204) similarly ruled that a Jewish man should cover his head during prayer (Mishne Torah, Ahavah, Hilkhot Tefilah 5:5).”
[Source: http://www.jewishmag.com/122mag/kippa%5Ckippa.htm] – Maimonides was a Talmudic teacher & a secret kabbalist.

Check this news, Dec.2017 – Will Trump Hasten the Arrival of the Messiah? Jews and Evangelicals Think So.   – But Jews & Evangelicals are not waiting for the same Messiah!!

Kabbalists are NOT waiting for Jesus!  but their messiah is the Antichrist!! They are working & making everything ready for him. Sadly it seems our presidential family, America & many Christians are playing a big roll in helping Antichrist & His kingdom to come to power. It isn’t God who wants to bring the Antichrist on the scene, but the Antichrist advent is by the works of Satan!

God may control when Satan will be allowed to do this, but God will not be part nor condone that man’s wickedness.

If we Christians want to help to hasten Jesus’ coming for His church, then let us preach the true gospel to every creature, let us lift up our brethren in prayer or let us warn them of the deception that is taking place right now, but please, for your own sake (& your love ones), do not take side with the enemies of God!

Please see more at: Building a Home for the Antichrist

(My heart goes to them (Jews), I pray for their salvation, many of them mean good but sadly they are deceived & still reject their true Messiah. But also they won’t tell you the whole story not to offend, but they are taught this messiah will bring peace & prosperity to them, not to the rest of the world).

Christians don’t need the 3rd temple, after Jesus’ sacrifice on the cross believers are indwell by the Holy Spirit of God and our bodies are now the temple of God. God will not dwell in man made temples anymore (Acts 17:24).

What? Do you not know that your body is the temple of the Holy Spirit, who is in you, whom you have received from God, and that you are not your own?” 1 Cor.6:19

Do not be unequally yoked together with unbelievers. For what fellowship has righteousness with unrighteousness? What communion has light with darkness? What agreement has Christ with Belial? Or what part has he who believes with an unbeliever?  What agreement has the temple of God with idols? For you are the temple of the living God. As God has said: “I will live in them and walk in them. I will be their God, and they shall be My people.” 17 Therefore, “Come out from among them and be separate, says the Lord. Do not touch what is unclean, and I will receive you.” “I will be a Father to you, and you shall be My sons and daughters, says the Lord Almighty.” 2 Cor.6:14-18,  -See also Ez.44:23

“… connected to the Messianic process which is happening right now. When he promised to move the American Embassy to Jerusalem, he attached himself to the power of Moshiach [the messiah], which gave him the boost he needed.”

Berger says that the election of Trump fits perfectly into the process of Messiah (the antichrist) : “As the spiritual descendant of the Biblical nation of Edom, America has a very important role to play in the Messiah ...” He also stated the Third Temple will be prepared by descendants of Edom as a “reparation” for destroying the Second Temple.

“But Donald Trump is not righteous enough or knowledgeable in Bible to actually be the Messiah,” Rabbi Berger noted. “Trump’s connection to the Messiah is that he will play a role in one of the major functions of the Messiah. He will pave the way for building the Third Temple.”

“If he (Trump) leaves us without the Temple Mount then his grand announcement amounts to nothing and will actually cause great harm,” the rabbi warned. “The United Nations and the Palestinians cunningly refer to East Jerusalem in order to hide their true intentions of leaving Israel without their true capital. President Trump said he was establishing the capital of Israel, and this absolutely must be based around the Temple.

Rabbi Weiss also stated : “the leaders of Russia and America can lead the nations of the world to global peace through building the Temple, the source of peace.”

All these rabbis take their pronouncements from passages in the Kabbalah, an occultic, esoteric & mystic tradition which have different interpretations of the Old Testament. America is not Esau or Edom like they teach. Edom were the descendants of Esau, the twin brother of Jacob (Israel) & the Bible prophecies for Edom are not good at all! Please see Isaiah 34:5-15, Jer. 49:7-22, Ezekiel 25:12-14, 35:1-15, Joel 3:19, Malachi 1:3-4, Psalm 83,  etc.

I don’t believe the president is the Antichrist either, but his son in law, a Chabad Lubavitcher (Kabbalist) who had his own skyscraper at 666 Fifth avenue, could be a more fitting candidate, still I have some doubts (He could well be what kabbalist Jews considered their ‘Ben Joseph’ like John the Baptist who prepares the way, check  Pt.1– [He named his son Joseph, after his grandfather]).

The president has stated in several occasions that his son in law is the only person capable of bringing peace to Middle East & he has been tasked with drawing up a new Israeli-Palestinian peace proposal, expected to be presented soon, 1, 2.   –Dan.7:29 says “And he shall confirm the covenant with many for one week” 7 years. It won’t include just Israel & Palestinians but more people, -Saudi Arabia, Jordan or even Vatican?

*If this Peace plan happens or is signed, then it will be very significant! (Then it will almost certain that he is the man of sin). But I believe a war, probably with Iran (or Damascus/Syria) will occur before they confirm it & the real antichrist will then be revealed to bring confirm the covenant for 7 years with many.

Right after Trump’s declaration that Jerusalem is Israel’s capital (Jerusalem Embassy Act.) & the move of the US embassy to Jerusalem (1), Europe, Arabs unite against Israel at UN Security Council, the reaction was expected & Iran is preparing for war  & so is Israel. But that’s the plan.

Many Christians are quick to say our leader is doing God’s will, (I understand some like voting for a lesser evil, but please don’t defend evil), and they easily disregard or don’t want to know that he is siding with kabbalist & the Antichrist .

1/ By giving money to Kabbalistic organizations,

2/ His daughter prayed to Kabbalist false Messiah in order for him to win the presidential elections (1),

3/ His former pastor that he mentioned was his mentor Norman Vicent Peale, was a 33 degree Freemason,

5/ The kabbalist Sanhedrin blessed him,

7/ Wants death penalty for anti-semites after kabbalist synagogue was attacked, but most kabbalist & many called Jews are not really semites.

8/ He studied in Jesuit Fordham Univ. & is close friend with many Jesuits (kabbalists), he visits pope,  (etc,  etc, etc).

But also on that same meeting of declaration he affirmed the United States support for a two-state solution.   Also the U.S. Ambassador to the United Nations said that Trump administration “absolutely” supports a two-state solution to the Israeli-Palestinian conflict. On Sept. 27th 2018 at a Press Conference he corroborated publicly this view. United States of America (& many so called ‘Christian’ presidents both Democrats & Republicans) have been pushing this agenda for more than 20 years. The land will be divided (either two-states or more, Jerusalem shared, etc.), it is already written! but the US & the supporters of this will be judged for their contribution in “dividing the land” of Israel.

“. I will gather all the nations,and bring them down to the Valley of Jehoshaphat.
I will enter into judgment with them there regarding My people and My heritage Israel,
whom they have scattered among the nations; they have also divided up My land.” Joel 3:2

The Jerusalem Sanhedrin Prepares to Enforce the Talmudic Noahide Laws

Paving the Way for the Antichrist’s Global Peace and Unity- Pt.5

Secular Video ( The rabbi leader of Sanhedrin says their messiah is not Jesus- min.26:15-38).