October 9, 2018 / cristolaverdad
This entry is part 3 of 6 in the series Antichrist
Antichrist

In the book of Daniel we find this about the Antichrist:

Here Daniel 7 is talking specifically about the Antichrist doing this changes right before he takes power for 3 ½ years. (Rev.13:5).

In 1999 ‘The World Summit on Peace & Time’ involving world leaders, included United Nation & Vatican, presented a ‘Calendar of peace‘ with thirteen (months) of 28-days, a moon calendar but it hasn’t been implemented yet. Also the new Jewish Sanhedrin is normally in charge of laws & times, so changes shall come later when Antichrist is manifested.

In Europe many Orthodox Jews turned to the Zohar (Kabbalah) which expanded in the 16th century & led to the Hasidic or Chassidic movement. Hasidism emphasized personal religious experience (mysticism) over biblical doctrine. The largest & most influential Jewish organization in the world is the (Hasidic) Chabad Lubavitch Movement which practices Lurianic Kabbalah. Their main leader was Rabbi Menachem Schneerson (1902-1994) considered also their messiah, but even after his death they continue to revere him as their leader & wait for his reincarnation. They promote the conversion of non Jews to ‘Hasidic Gentiles‘ to follow the Talmudic ‘Noahide Laws,‘ their rabbis say: “Righteous gentiles, as long as they follow the Seven Laws of Noach, they’ll be saved“.

Once Moshiach comes and all the dust settles,. . .All remaining Jews will lovingly return to Torah and the Land of Israel, and all remaining gentiles will accept upon themselves the Seven Noahide Laws. There will be one God for all nations, the God of Torah.” Rabbi Pinchas Winston (This News are founded & run by Chabad).

The 7 Noahide Laws are exclusively for non Jews & they look harmless at simple view, but they don’t disclose details of their entire Talmudic doctrine behind them. The Jews will follow the 613 commandments according to the Talmud, a book that blasphemes our Lord Jesus Christ. It is a matter of great concern that the Talmud allows them to lie, oath-breaking, indirect murder & sex between adults and children. See more here & Talmud, but when people try to make others aware of these verifiable facts, then often they are accused of being anti-semitic.

According to Chabad. org one of Kabbalists main web sites the 7 Noahide laws are:

1. Do not profane G‑d’s Oneness in any way – Acknowledge that there is a single G‑d.
2. Do not curse your Creator.
3. Do not murder.
4. Do not eat a limb of a living animal.
5. Do not steal.
6. Harness and channel the human libido.
7. Establish courts of law and ensure justice in our world. (This are not secular courts but small Sanhedrin courts [of rabbis & faithful Noahides] around the world enforcing these laws. Punishment is death penalty, & only one witness is needed).

You will find them in different order in many places, but always the same 7 laws. The 1st Noahide Law is a prohibition of idolatry. Jews believe God is only 1 person (the Father), which will make Christians who believe that Jesus is God, to be as idolaters. The punishment for most crimes according with these laws (which are more than 7) is decapitation. Halakhah 56a. (Check also Rev. 20:4). See also videos 1, & 2.

For Jews, the belief that God can be human is the ultimate heresy.— Rabbi Shmuley Boteach on Christianity

1 Timothy 4:1-3 mentions about the great apostasy at the end & how things will look like :

Now the Spirit speaketh expressly, that in the latter times some shall depart from the faith, giving heed to seducing spirits, and doctrines of devils; 2 speaking lies in hypocrisy; having their conscience seared with a hot iron; 3 forbidding to marry, and commanding to abstain from meats, which God hath created to be received with thanksgiving of them which believe and know the truth.

These could be related to the 4 & 6 laws. But if you think these Noahide Laws will never be allowed in America, then you better think again. The law is already in ‘House Joint Resolution 104, Public Law 102-14’. The Noahide laws were officially recognized by the U.S. Congress in legislation that was passed by both houses & signed by Bush Sr. on 03/20/1991 : 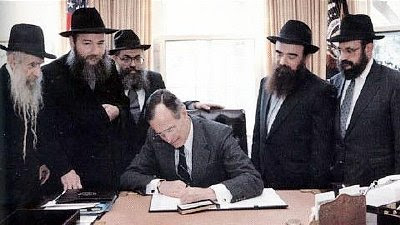 The United States Congress passed H.J Res 104, which was then signed into law by President George H. Bush and became Public Law No. 102-14.

Joint Resolution To designate March 26, 1991, as `Education Day, U.S.A.’. Whereas Congress recognizes the historical tradition of ethical values and principles which are the basis of civilized society and upon which our great Nation was founded; Whereas these ethical values and principles have been the bedrock of society from the dawn of civilization, when they were known as the Seven Noahide Laws  . . .

Whereas in tribute to this great spiritual leader, `the rebbe,’ this, his ninetieth year will be seen as one of `education and giving,’ the year in which we turn to education and charity to return the world to the moral and ethical values contained in the Seven Noahide Laws. and Whereas this will be reflected in an international scroll of honor signed by the President of the United States and other heads of state: Now, therefore, be it“ To see it google: H.J.Res.104 – Congress.gov | Library of Congress

Rabbi Scheneerson ‘Rebbe’ the leader of the  Kabbalist Chabad Lubavitch movement (who launched the global Noahide Campaign) has been honored by many U.S presidents: Nixon, Ford, Carter, Reagan -who started the Proclamations to honor the Rebbe (https://www.chabad.org/therebbe/article_cdo/aid/142535/jewish/The-Rebbe-and-President-Reagan.htm), Bush Sr, Clinton, Bush Jr, Obama (who appointed Pro-Noahide Law Rabbi David Saperstein as US Ambassador for International Religious Freedom), as well as the actual president, who is even more involved than all of the others, since his daughter & her husband are part of the Chabad Lubavitch Movement. Check 1, 2, 3, 4, 5, 6. 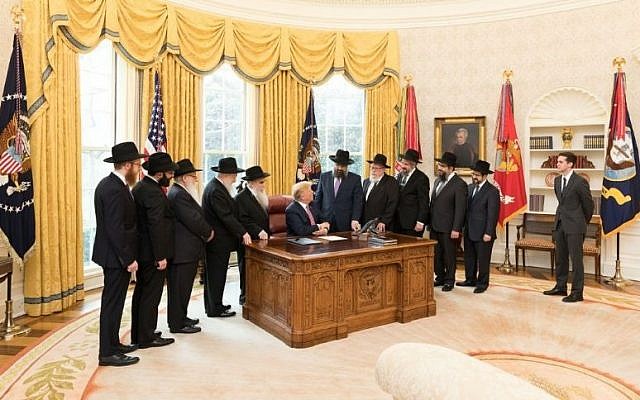 Actual president issued a proclamation in honor of Education and Sharing Day, marking the anniversary of the birth of the last Lubavitcher rebbe, Rabbi Menachem Mendel Schneerson.

Then, this year 2018 (the 40th anniversary of presidential proclamations), for the first time, simultaneous proclamations have been issued by the governors of all 50 states to honor Rabbi Scheneerson & his efforts to teach the Noahide laws (warning, kabbalistic page => https://www.chabad.org/therebbe/article_cdo/aid/3982634/jewish/Education-Day-Proclamations-2018.htm). 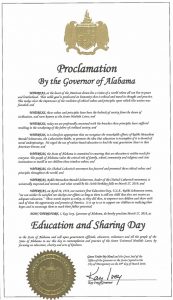 The promotion of the Noahide Laws continues, for example, in Israel in January 2004 , Sheikh Mowafak Tarif, the spiritual leader of Israeli Druze, signed a declaration, which called on non-Jews living in Israel to observe the Noahide Laws. He was joined by the mayor of Shefa-‘Amr.

In 2016 Chief Rabbi Yitzhak Yosef, stated: “According to Jewish law, it’s forbidden for a non-Jew to live in the Land of Israel – unless he has accepted the seven Noahide laws”. This is called Ger toshav (1).

“During a recent wave of violence in Israel/Palestine (September 2015-January 2016), ignited by tensions on the Temple Mount, Chabad rabbis began displaying billboards in Arab villages and handing out flyers proclaiming the universality and importance of the Noahide laws” WRSP 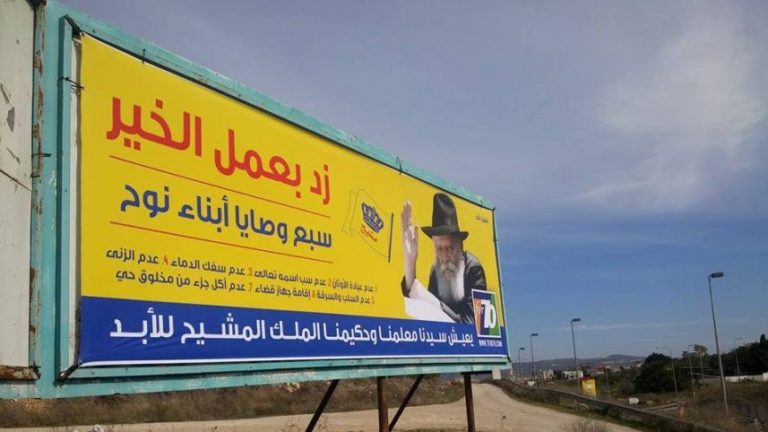 – But the plan is not just for America & Israel, but the whole world.

“This obligation, to teach all the peoples of the earth about the laws of Noah, is incumbent upon every individual in every era”  {Mishnah Torah, Law of Kings 8:10} – Oral Law

‘Other world leaders have joined the call for further observance and knowledge of these laws. For example, Herman Van Rompuy, President of the European Union wrote (in July, 2014) that he seeks greater “dissemination of the universal values known as the Noahide Laws,” and Major General Michael Jeffery, Governor General of Australia, lamenting family breakdowns and drug and alcohol abuse in modern society in a 2008 letter, wrote that he believed that observing the fundamental values of the Noahide Laws can be an antidote to such ills of society‘. Link.

Among other leaders are Australian Senator Eric Abetz, Newsweekly: ‘Book traces foundations of true civilization’, Christian Dominionists (1), UN 2012 video, The United Nations on June 2013 signed document that states the Noahide Laws are laws “which all peoples of the world are obligated to follow.” & also the United States Supreme Court Justices, check 1, 2, 3; ( 9 justices, 6 are Catholic & 3 Jewish & 6 from Harvard & 3 from Yale). Judge Kavanaugh (a Jesuit trained Vatican agent) in a 2009 article for the Minnesota Law Review, he wrote that Congress should pass a law to exempt a sitting president from criminal prosecution or investigation: “I believe that the president should be excused from some of the burdens of ordinary citizenship while serving in office,” Kavanaugh wrote. “We should not burden a sitting president with civil suits, criminal investigations, or criminal prosecutions.” (1). Pls check Supreme Court & Catholic Opus Dei

Groups of non-Jewish delegates have been traveling to Jerusalem to pledge their loyalty to the Laws of Noah. They appear before Sanhedrin (a court of 71 rabbis), which established a High Council for B’nai Noach (Children of Noah). They all pledged:

“I pledge my allegiance to Ha Shem, G-d of Israel, Creator and King of the Universe, to His Torah and its representatives—the  Sanhedrin. I hereby pledge to uphold the Seven Laws of Noah in all their details, according to the ORAL Law of Moses under the guidance of the Sanhedrin. May Ha Shem bless and aid me, my fellow council members and all B’nai Noach in all our endeavors for the sake of His name ”

I may be wrong, but I believe the mark of the beast (Rev.13:16-18) possibly will be accompanied by this allegiance (or a similar one). This pledge is denying God’s Word & His Son Jesus Christ, it is an act of loyalty &  allegiance to the antichrist & his system. That is the reason God will judge the people that receives the mark Revelation 14:9–11 & 19:20, He is a Righteous & Just God!

Because of some Christians & also non Christians are sounding the alarm about these laws, they are in a ‘Damage Control Mode‘ right now, giving you half truths (e.i Rick Wiles, Alex Jones, etc.), so please be aware! Don’t subscribe to their channels nor send them money they will get you in a list.

May our Precious Lord Jesus bless you & keep you!!